TechSpot Elite
Hello everyone, my motherboard is an asrock b450 gaming itx/ac, I've been told that there are only a few brands of memory that are compatible with it. It maxes out at 32gbs and there I have some confusion about the freq. level, I would like to play it safe and was thinking about getting
G.SKILL Flare X Series 32GB (2 x 16GB) 288-Pin DDR4 SDRAM DDR4 3200 (PC4 25600) Desktop Memory Model F4-3200C14D-32GFX. Any one here know if this would be compatible or recommend some other brand and specs?

Staff member
ASRock have a listed of memory modules they've tested for that board: 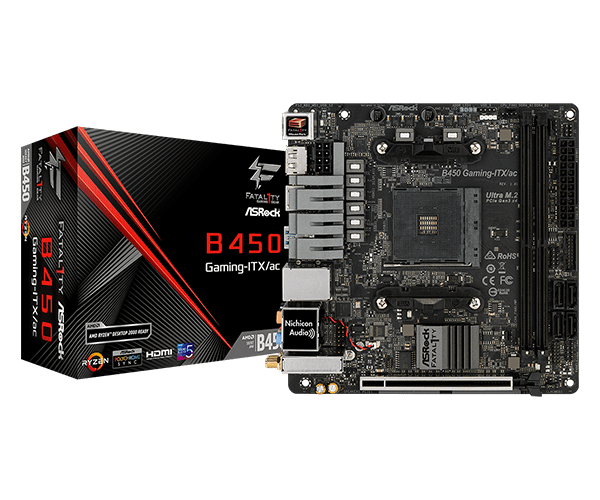 If you go through the list (for Pinnacle Ridge and Raven Ridge), you can see that they've only tested F4-3200C15D-32GTZR and F4-3200C14D-32GTZR. The RAM you're looking at is essentially the same as the second one: it just doesn't have the LED lights. The RAM timings and voltages are exactly the same, so it should be fine, even though ASRock haven't tested it.

However, do note that ASRock state that the highest 'supported' speed is 2933 MT/s and not the RAM's rated speed of 3200 MT/s. That means there's no guarantee at all that the system will be stable at the higher speed.

If you're really after something running at 3200 MT/s, then check ASRock's list carefully - make sure the OC column as a V symbol in it.

TechSpot Elite
Following up on your info.I did some further research on the highest supported speed being 2933 unfortunately matches up with what the (uefi version b450m/ac P1.90) says in my bios.The xmp is set and not available to tweak either. While I'm going to do a little more digging I appreciate you getting back to me with useful info. There seems to be a lot of variations with the b450 boards. Thank- you.....Glenn

TechSpot Elite
Hello again, First I got to tell you I'm learning a lot as I get to understand this computer that I bought a month ago, The biggest thing I'm learning is that I don't know jack s*^t about computers. My motherboard is an asrock b450m a/c, not the itx version that I first thought it was. I bought the memory that I was asking about in my first post, ( G.SKILL Flare X Series 32GB (2 x 16GB) 288-Pin DDR4 SDRAM DDR4 3200 Model F4-3200C14D-32GFX ). It is compatible and I was able to activate the xmp profile Then I benchmarked my pc and it showed that I had more latency with my ram than I should, I bought that particular ram with thinking I would have less latency. I'm nervous about tweaking my xmp specs because I don't know that much about it. Anyone have any tips?

Staff member
Latency increases with clock speed in RAM, to maintain overall stability. But because the timings are set to number of clock cycles, not actual time, it's not necessarily slower. I'm using DDR4-3000 in my system:

Notice how that the XMP profile has, for example, a tRC value of 52 compared to the 'best' standard clock value of 50. Although that's 2 cycles longer, the clock speed is 433 MHz higher, so each cycle is shorter.
Last edited: Oct 24, 2020

TechSpot Elite
I did some research and I found it some what complicated even though every blog or video I used said it was really easy. So I focused on the tRC value that you pointed out and mine was at 75. I read that with my memory kit it should be 48. So I changed it to 48 and have not noticed any benefit or any instability. I read that most or all of amd's boards defaulted to this tRC value of 75, and that it could be a mistake in the bios from an update. Most of this is completely new to me and I would like to know what you think. Thanks Glenn

Staff member
Give this tool a try: Ryzen DRAM calculator helps with overclocking your memory on the AMD Ryzen platform.

It offers suggested timings (either for a safe overclock or a fast one) based on the memory kit and Ryzen processor you've got. You can see the effect that manually adjusting RAM timings can have with Ryzen processors here: Generally speaking, outright RAM clock rates gives you the main speed increase, but with good timings used, it make a noticeable difference to the lower end of the performance spectrum.

TechSpot Elite
I tried out the dram calculator and in both the safe and fast mode, the safe caused a poor performance with the cpu and did not help with latency. The setting for fast caused instability. Th pc had trouble rebooting and kept shutting down before windows reloaded. There were some of the dram calculations I could not make because the bios had minimum values that could not be set lower. For instance the value of tRC which I had already lowered from 75 to 48, the calculator recommended 2. In my bios it had a min. of 9 I believe. I'm rethinking my thoughts about tweaking for awhile, I was worried when my pc kept shutting down after I changed those timing numbers, saying to myself that my pc is actually running pretty good and I should leave well enough alone. Thanks for trying to help......Glenn

Staff member
I think you're possibly misreading what the DRAM calculator is saying. For example, a setting for Zen 1 on B450, with Samsung B-die single rank, gives:

However, what's far more important is what ASRock are stating for that motherboard. They don't list G.Skill F4‑3200C14D‑32GFX on any of the memory QVLs for the B450M a/c - that means either they haven't tested it, or it's not compatible with that board with its XMP profile.

If you go through the lists, they recommend hardly on RAM models for a speed of 3200 MT/s, from any vendor, whether it's for Pinnacle Ridge (Ryzen 2000 desktop series), Raven Ridge (2000 APU series), or Matisse (Ryzen 3000 desktop series). For those that it does support at that speed, the timings are almost always involve a tCL value of 16 or 17.

In other words, G.Skill's XMP profile on the F4‑3200C14D‑32GFX is too aggressive for the ASRock B450M a/c. That's not to say it can't or won't run with those timings, just that ASRock aren't guaranteeing anything. But given that in post #4 you got it run with the XMP profile enabled, I'd leave it all well alone and not worry about any of the latency values stated in the BIOS or any app.

TechSpot Elite
Hello Neeyik, just updating a little about my ram, I set the tRC to 42 as you mentioned in the last post and I set the dram voltage from 1.350 to 1.355, I then benchedmark my pc and the results were the ram did improve without any noticeable other problems. I don't think I would really notice it without the app. because I probably don't use or need 32gbs of ram. Thanks for your help.
You must log in or register to reply here.