Forward-looking: Not that we needed more evidence of gaming's increasing popularity, but here it is: according to a new report, worldwide shipments of both gaming PCs and gaming monitors continue to grow at rapid rates—faster than their parent markets—and they're expected to stay this way through to 2025. International Data Corporation (IDC), in its latest Worldwide Quarterly Gaming Tracker report, notes that gaming PCs, which includes both desktop and notebook PCs, are expected to see unit shipments grow from 41.3 million in 2020 to 52.3 million in 2025, marking a five-year compound annual growth rate (CAGR) of 4.8%. The vast demand brought about by so many people working, learning, and staying at home has seen shipments remain high throughout the year. The second quarter of 2021 ended with gaming PCs and monitors reaching 15.6 million units, a 19.3% increase compared to the same period in 2020.

"The gaming market was on fire for years leading into the start of the pandemic in 2020 and things only accelerated as most people were spending more time at home and in front of screens," said Ryan Reith, group vice president with IDC's Mobility and Consumer Device Trackers. "At this point the global supply shortage is well known and continues to be a moving target, yet demand for gaming hardware (PCs, consoles, monitors, etc.) and titles continues to surge. Many have speculated that as reopening slowly begins around the world, this growth could be in jeopardy, but we are just not seeing that."

By 2025, the combined value of the gaming PC and monitor markets is expected to have reached over $60 billion, up from $43 billion in 2020. IDC research manager Jay Chou puts the increase partly down to gaming PCs' ability to handle tasks beyond just games, though he warns desktops need to innovate to compete with powerful notebooks that offer more portability. Interestingly, IDC believes the average selling price of these PCs will grow from $925 to $1,007, while monitors are predicted to drop from $339 to $309. That's a trend we've seen for a while; gaming monitors with features such as 4K resolutions and high-refresh rates are no longer reserved for those with deep pockets, while pre-built PCs and notebooks are getting more expensive, partly due to component supply issues.

AMD CEO Lisa Su recently joined the chorus of voices claiming that the current chip crisis should alleviate in the second half of next year, bringing supply and demand levels closer together.

It’s the GPU that is controls a “gaming pc’s” price.

The quarantine era has been an absolute drag for pc and console gamers alike due to greed and scalping.

I do appreciate the laptop market for offering a reasonable solution to gaming PC.

I bought a TUF A15 3050Ti with Ryzen 8 core cpu to use for a YouTube podcasting platform. It performs admirably.

Regardless, the PC's capability for modification continue to make it king of the computer world .... but the changes in CPU's, motherboards, etc. is maddening when you try to fit it all together and don't have a chart to show incompatibilities ..... LOL yeah, yeah, us old folks want it all like it used to be.

I bet the only price drops we'll see on monitors will be for those that nobody really wants I.e 24in 1080p 60Hz.
E

Ethereum 2.0 is due within a month so perhaps that will finally start to bring the prices down.
X

It’s the GPU that is controls a “gaming pc’s” price.
Click to expand...

CPUs have increased in price, AMD increase their prices for Zen3 the same goes for Intel for a while now.
SSDs are stuck using old technology yet the price remains the same, so basically they increased.
Reactions: Sausagemeat

I want a good 4K 32" monitor with proper HDR and 120Hz refresh rate, and the only monitor that satisfies such expectation is ASUS ProArt Display PA32UCG-K 4K, which is priced at about $6,000 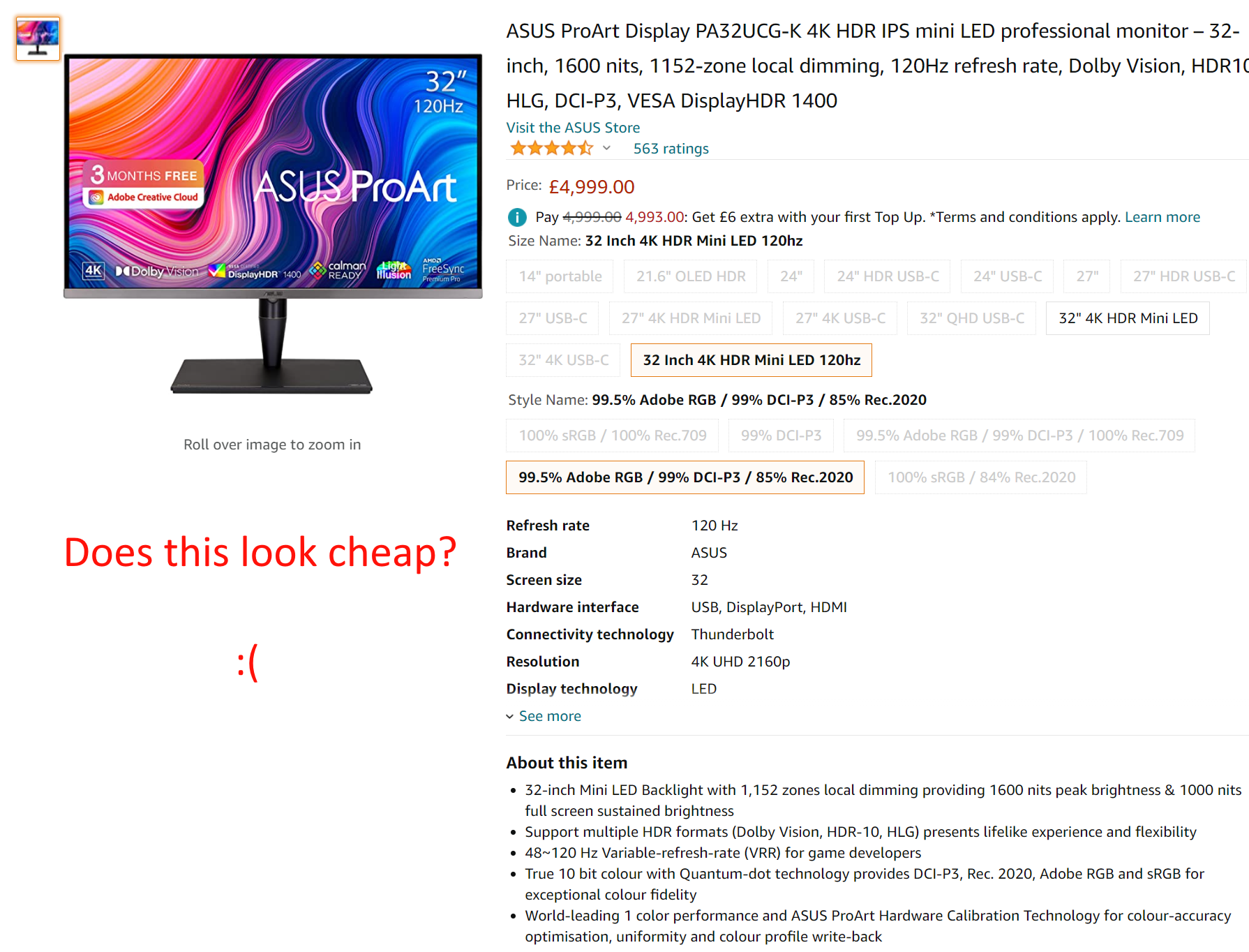 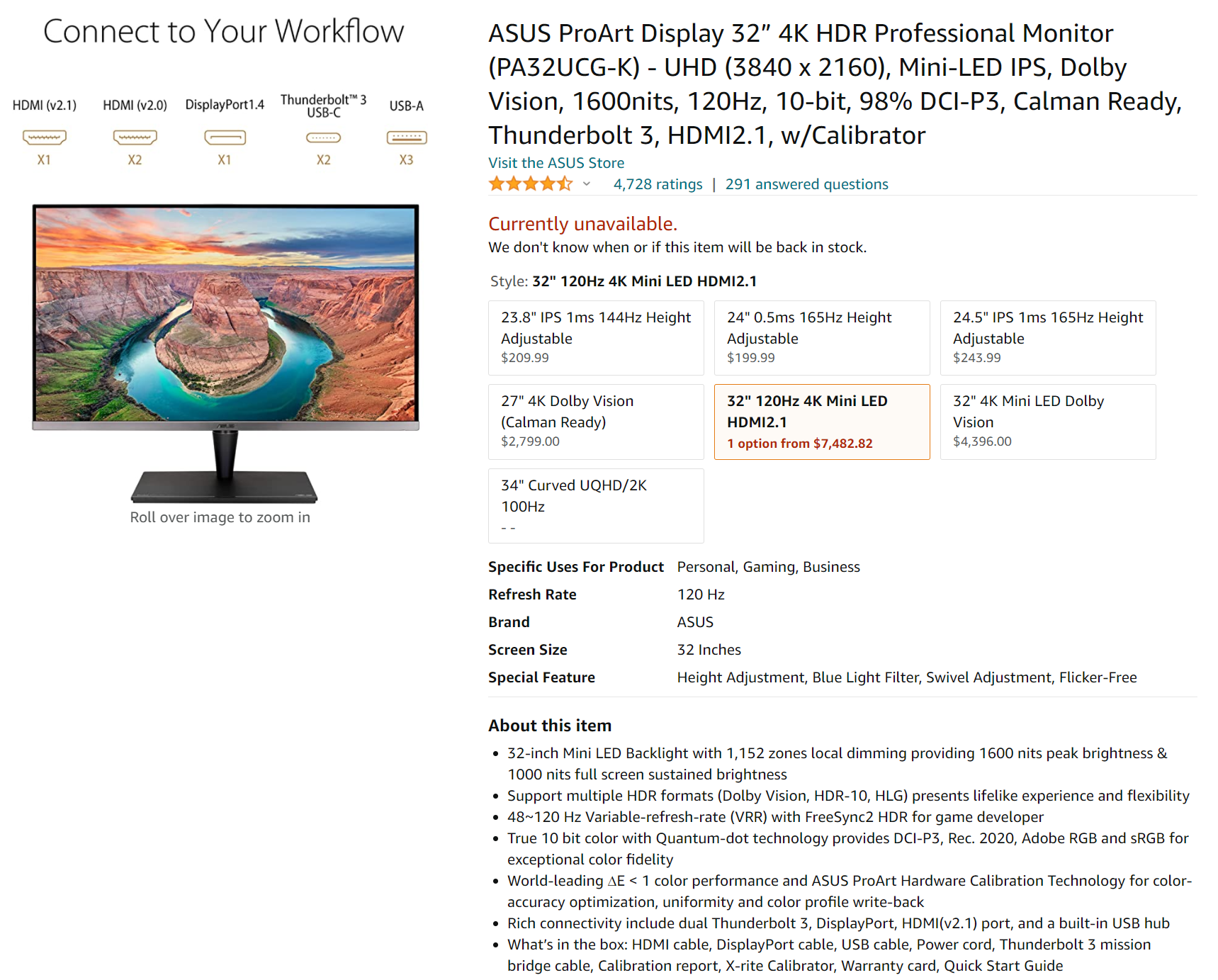 Cpu prices has indeed increased. I just bought a cpu+mb+ram+psu as present to my old dad, and I had to buy athlon 3000g to save money from both ryzen "g" series and videocards in general. 5600g and 3200g are way too expensive from their original price, also the 3000g I got for 85 euro, instead of its original 50 euro. Intel 10100 was an option but I decided to stay with amd for future upgrades and also cuz I already own another amd system at home.
In comparison with 3 years ago, also psu prices increased... at least seasonics bronze ones. Monitor prices decreased, I could finally get a good 200 euro 144hz ips monitor recently.

Guess I'll clean up and strap some new fans to my trusty 980ti this weekend, better take good care of the ol workhorse since a replacement is nowhere near on the horizon.

I want a good 4K 32" monitor with proper HDR and 120Hz refresh rate, and the only monitor that satisfies such expectation is ASUS ProArt Display PA32UCG-K 4K, which is priced at about $6,000

Now, do tell me about "cheap" monitors...
Click to expand...

42 inch oled out in Jan for a quarter the price with lower input lag... no brainer
Reactions: Reehahs

Pastuch said:
42 inch oled out in Jan for a quarter the price with lower input lag... no brainer
Click to expand...

Because they are good for FPS, excellent for HDR, terrible for contrast and no good for pixel density, I.e. not suitable for professional work.

Xex360 said:
SSDs are stuck using old technology yet the price remains the same, so basically they increased.
Click to expand...

They have gone up quite a bit since then though.

I suppose if you want "a zillion gigabytes per second transfer, you're going to pay through the nose for it. But it seems like that's a personal preference, or problem, depending on your point of view..
Last edited: Oct 10, 2021
Reactions: Reehahs
You must log in or register to reply here.