Humble's "Stand with Ukraine" bundle offers dozens of games, books, and software for $40

kiwigraeme said:
Man while we are playing tik tak toe - you have gone beyond 4D Chess ( Trump the known best player ) to string theory chess - you are unravelling all those scrunched up dimensions .
What does it all mean ? it the vastness of the Universe none of this even matters - Everything is relative ( by definition nothing can be absolute ) .
You Sir are an embodiment of the Age of Aquarius - the age of enlightenment - moving on from the golden bull and the forgiving fish .
You can lead a horse to water , but you can't make them think eh ?
I'm a cynic by nature - I like the phrase cynicism is a protection for optimists .
I do like to be an optimist- a light shade of rose helps a little .
But not for you - You will take that gift horse and look him in the mouth.
Why's it free? , what do they really want ? - their is no such thing as free .

Now let's get serious - yes do gooders with convictions can do lots of damage.
Altruism is a feel good reward and entities can use it to increase standing .

Why should we care ? why do you care - Does your concerning horror of this forbid you to buy this Bundle - which is a great bargain independent of where the money goes .

So you do some thinking and explaining by this concern of yours has any relevance in the real world ?

The other example I know is Charities who refuse to take "blood" money - ie money from organisations who are contrary to their beliefs -Is this the case for you here with Humble Bundle .

Basically I am saying your comment is BS and has no real relevance in a complex world .

Ie none of the people who buy the bundle care one whit about your thinking ahead - I bought it and I don't ( no sleepless nights of regret for me - hell my first time in NYC I bought a couple nappies for an exorbitant price $16 small pack 1988 - was just 21 years old - yeah probably scammed - I think its a laugh - even laughed with a NY friend who let me do it - the same day )
Click to expand...

lol I'm not gonna read all that
K

Dunkerton said:
lol I'm not gonna read all that
Click to expand...

Hit by a wall of text take D20 damage
Reactions: Dunkerton and TempleOrion

Tantor said:
They're not helping Ukraine. The entire Eastern half of the Ukraine hates Zelensky. The present Ukrainian government was illegitimately foisted on the Ukrainian people by the CIA backed 2014 coup.

Since then, the three Ukrainian presidents have been billionaire oligarchs. All three, Yatsenyuk, Poroshenko, and now Zelennsky are Israel-Ukrainian dual citizens.

Russia is entirely correct to go in there and root out this mess.
Click to expand...

Tantor said:
They're not helping Ukraine. The entire Eastern half of the Ukraine hates Zelensky. The present Ukrainian government was illegitimately foisted on the Ukrainian people by the CIA backed 2014 coup.

Since then, the three Ukrainian presidents have been billionaire oligarchs. All three, Yatsenyuk, Poroshenko, and now Zelennsky are Israel-Ukrainian dual citizens.

Russia is entirely correct to go in there and root out this mess.
Click to expand...

The must love the Russian Liberators flattening killing and raping them .
Here is a Putin in 2008 saying Crimea is Ukrainian and not disputed
Is debateable if even Ukrainian as was Tartars .
As for 2014 - this was a manufactured war by Russia - The rise of Asov battalions is a consequence to that ,
Even some rich Russian in NZ is saying it's complex and Ukraine is a modern invention . Fun fact Kyiv existed since 465 AD , Moscow 1147 - so 665 years older .
Lots of Ukrainians and Belarus people took the brunt of the German attacks .
The USSR would have fallen without serious material aid from America and The USA .

Rusland has manufactured stories of persecution of it's people to get popular support .
Putins popularity rose dramatically with the Invasion of Dagestan
Yet the Moscow Terrorist bombings were highly likely carried out on Putins orders - killing 300 & injuring 1000.
here's the Wiki page 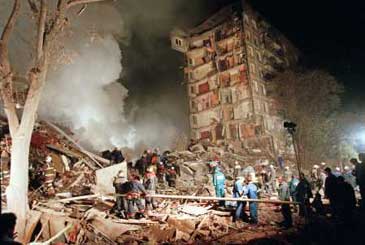 en.wikipedia.org
That article keeps it open - but most evidence points to Russian bombs/detonators and Security Forces - they lack of myriads of supporting evidence for Chechens to take none it is telling .
The simple fact of complete media control in Russia is now telling- how badly it's going and how desperate Putin is .
The fact that Russia is struggling to make any half decent propaganda from Ukraine is telling .
Well no longer Ukraine is not Russians little pretty and has to take it ( this is a very Russian saying Putin has used )
Ukraine has always resisted Russian control.
The people have spoken they want democracy - they do not want be slaves to a Tzar/Dictator
Rus is not fighting and dying badly in large numbers for defending the Motherland - They are dying solely for 1 man .
Russia at the moment is a gas station with nukes .
None of the pro Russians here will go to fight - they know it's over . Ukrainian Army is purposely destroying the Russian elite divisions .
Imagine NZ , UK , USA with their SAS , Special Forces decimated .
No matter how many tanks and how few military trucks ( unbelievable true - a fraction of trucks needed ) , artillery , planes etc they have - They only have a small well trained army - their conscripts/reservists are a joke - their training was pathetic .
The Russians even if they love Putin know they are just Canon fodder - because they always have been - they make coping jokes about it .
Only the poorist and/or silliest will sign up .
This period of Russia is now finished - If Putin stays in power and carries on - it's military men will be slaughtered - cut off , hated , frost bite. no supplies ,no good communication , leadership - easy targets - more and more will simply surrender as has started - others are just walking away - lots of those abandon vehicles are not stuck , or out of fuel - the solders walked away . They know they are not watching each other die for Mother Russia - they see no welcome . They know they can not fight as men - only as ORCs destroying. civilians , history and buildings .
Their parents on phones don't believe their stories - they believe Putin .
But with over 16000 dead , hospitals overflowing , knowing that as cripples in their Motherland they will hated for the shame of losing - they and the Generals will be blamed - It will take 20 plus years for the average Russian to realise the blame is himself - for wanting a a Strong Tzar with untold wealth hidden away - super yachts , castles, apartments in the 100s yet none in Putins name - yet he owns them all ( Ha they will all be taken from him by the next leaders )
You must log in or register to reply here.