The Problem:
So this happens completely randomly (mostly while I'm in desktop) my screen goes black and my PC is still running but unresponsive. After like half a minute I can start hearing my clicks or apps but the screen remains black. After the initial black screen everything freezes but after a while the PC resumes (at least the audio and the controls) but the monitor has no signal. This hasn't happened once while I was gaming, only when I'm idle, browsing or watching something. So I went to check with the event viewer and there are multiple critical level and error level issues. I'll list some of them.

One example of my Event viewer 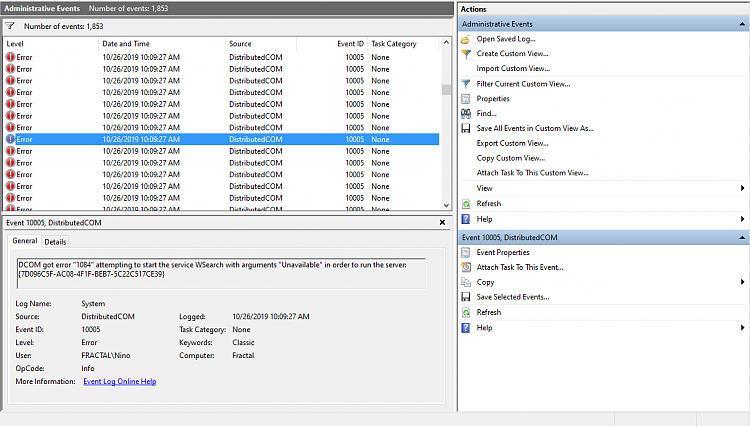 1. Updating all drivers to recommended versions (including bios). Had no effect at all.
2. Updating drivers with Armory Case from Asus. No effect
3. Stress testing CPU and GPU - everything is fine, the noise and the temps are normal. I used furmark and prime95
4. Unplugging the HDMI cable and plugging it back in. I want to note that my monitor came with only 1 HDMI cable and my graphics card has only one slot that supports "that" type of a HDMI cable. So basically I couldn't connect anything wrong cause there is only one way of doing it
5. Turning sleep mode off and on. This had no effect. The PC and the monitor both wake up normally from sleep mode
6. Ran SMART for my SSD - SSD was marked as "good"
7. Unable to run windows repair because "access is denied"

It's really frustrating that this is happening like 3 days after I've built my PC. I don't even know where to start looking for the cause of this problem. How can I fix my drivers when they are up to date?


Any ideas and suggestions would be appreciated.
D

I'm getting similar issues to you with nearly identical parts. I'm using 3800x/Asus tuf x570 gaming plus wifi/2070 super/Corsair Rm 650x. Have you solved your problems?
A

Yeah I found a solution by replacing my gfx card. I bought a 2070 super and had 0 issues since then.
I never found out if it was a bad card or bad drivers tho.
You must log in or register to reply here.

Hdmi out of range 8.8kHz/7Hz then pc reboots