In brief: Sony in its most recent quarterly earnings report said it sold 3.3 million PlayStation 5 consoles during the three-month period ending September 30, 2021. That’s up from 2.3 million units moved in the previous quarter and ties the 3.3 million units sold in the first quarter of 2021, pushing lifetime sales to 13.4 million units. PlayStation 4 hardware sales continue to dwindle, but that’s no real surprise at this stage of the game. In the most recent quarter, Sony recorded just 200,000 PS4 sales – a figure that has been on the decline for over a year now.

Read also: How I finally beat the scalpers and landed a PS5 Sony back in August said its fiscal year target to sell at least 14.8 million PlayStation 5 consoles was unchanged from previous guidance, and that was again the message put forth during the latest earnings call.

Game consoles are again expected to be a hot commodity heading into this year’s holiday buying season, but shortages and scalpers remain a thorn in the sides of manufacturers and shoppers alike. With no relief in sight, we’re likely destined for yet another chaotic couple of months.

A quick check of eBay (sorting by sold items) reveals an average seeing price of around $750 to $850 for Sony's PS5.

So few? That's less than Romania's population. Looking at PS 4's sales, those were in the 10 million - 22 million in the first 8 months. They really produced a small quantity of 5s.
Reactions: Reehahs

TechSpot Elite
It's not console sales that matter. It's who the first sales are going to.
T

13 million sold, ppl still wanting/needing a PS5 20 million. Why, cause out of that 13 miliion maybe 1or 2 mil went to a real person. That's why sales don't mean much when the world can't find the product or won't spend crazy amounts of $ on eBay. If you can't find it at stores or store websites (not eBay or resellers) then to me it can't be found. Paying absurd amounts for a product is just stupid n ridiculous.

This is because gamers are multiplying. Now everyone and their mums play video games. When I was a kid it was just me and the other nerdy kids at school.
N

How many people do you know who have one?

Between PS5 and Xbox SX/SS consoles there are more than 20mil units sold and still not enough to satiate demand, but this number is a lot bigger than the GPUs sold to gamers in the same 1 year time, a lot bigger...

So actually more console players (despite scalpers) have new consoles, than gamers have new GPUs, because Ampere + RDNA2 do not amount to 20mil units together and also besides scalpers GPUs are bought by the pallets for mining too, so a much worse situation overall. Not to mention GPUs are much more expensive than consoles...

I'm so glad I got an RX 6700 XT a few months ago close to MSRP after waiting 8 months, if not I would have waited even now and probably one more year from now and that would not be acceptable for me...
Reactions: Reehahs

Pricing demographics out of the market is part of the great reset. The shell game going on currently won't be necessary in 2-3 more years and products will sell close to msrp again. The thing is, at that time, the msrp for an entry level gaming card will be around a grand minimum.
J

QuantumPhysics said:
How many people do you know who have one?

I have one. Lucky enough to get it from Best Buy. Only took me a year of luck lol
Reactions: Reehahs and QuantumPhysics
W

I think half that numbers are being hoarded by scalpers, and not with gamers.
O

Jrfeimst2 said:
I have one. Lucky enough to get it from Best Buy. Only took me a year of luck lol
Click to expand...

Bought it from an online shop in the Czech Republic that did not allow preorders and had its own kind of payment system that wasnt friendly to scalpers. Waited like 3 days only before buying my own PS5. They usually restocked around 5-10 units a day.

RedGuard said:
So few? That's less than Romania's population. Looking at PS 4's sales, those were in the 10 million - 22 million in the first 8 months. They really produced a small quantity of 5s.
Click to expand...

Sure, small. And about those PS4 sales:

Sony has announced that the PS4 has sold 18.5 million units worldwide since its release just over a year ago.
…..

There has also been a huge jump since Sony last told us of PS4 sales. Back in late October,a little less than a year on from the console's release in mid-November, Sony said it had shipped 13.5 million units.
Click to expand...

But hey, if you have another source that backs up your ‚22 Million in 8 months‘ claim, kindly post it.


scavengerspc said:
It's not console sales that matter. It's who the first sales are going to.
Click to expand...

I read an interesting comment saying that the PS5 sold really well in China which hadn‘t been much of a console market before. If true, the consoles sold there aren‘t available to customers in other countries and depending on the number sold there this can be noticeable.

So you think scalpers are sitting on 13 million in stock? You know scalpers only make money when they sell them to consumers right?
Reactions: Ottis and Reehahs
R

Irata said:
Sure, small. And about those PS4 sales:

But hey, if you have another source that backs up your ‚22 Million in 8 months‘ claim, kindly post it.
Click to expand... 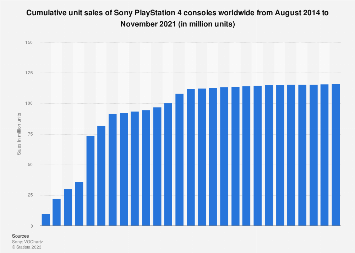 No offence intended here. I don't have a console in this fight, but Statista?
I used them 4 years ago and the data I got was an accumulation of opinions. Not actual fact based sources. Cost me a lot of money.

We might as well go to Fox News for climate change information.
Reactions: Irata
R

scavengerspc said:
No offence intended here. I don't have a console in this fight, but Statista?
Click to expand...

Business Data & Sales
www.sie.com
Reactions: scavengerspc
You must log in or register to reply here.