Ubisoft says it won't back down from NFTs, will stick to its 'principles'

A hot potato: The majority of people’s response to gaming companies trying to shoehorn non-fungible tokens (NFTs) into the games has been negative, to say the least. But Ubisoft isn’t put off by what many see as another shameless cash-grab, and it fully intends to push ahead with its plans while staying true to its “principles.” Ubisoft has been investigating blockchain titles through its Strategic Innovation Lab since at least 2018, and CEO Yves Guillemot is a founding member of the Blockchain Gaming Alliance. This month, the studio said that it would be adding NFT-based cosmetic items to Ghost Recon Breakpoint.

Ubisoft’s Quartz platform announcement video saw a deluge of dislikes, and it appears that nobody is buying the Ghost Recon NFTs. A report earlier this week showed that just eight items had been sold, the most expensive going for 40 XTZ (about $166 based on the value of Tezos) and the cheapest costing a single XTZ, or about $4.17.

Given all the negative PR, one might imagine that Ubisoft would follow GSC Game World, which abandoned plans to include NFTs in Stalker 2 following a massive backlash from fans. But Ubisoft didn’t become the most hated gaming company in the world by listening to public opinion.

In an interview with Decrypt, which is owned by a crypto company, Ubisoft blockchain technical director Didier Genevois said the firm isn’t dropping its NFT plans and will "stay true" to its principles.

"We have received a lot of feedback since the announcement, and we hear both the encouragement and the concerns," he said. "We understand where the sentiment towards the technology comes from, and we need to keep taking it into consideration every step of the way.”

"This experiment is meant to understand how the value proposition of decentralization can be received and embraced by our players. We know it is a major change that will take time, but we will stay true to our three principles."

Those principles that Genevois references are to “use the tech responsibly” and “build a safe environment” for players to explore how NFTs work, “only leverage energy-efficient proof-of-stake blockchains,” and “focus on meaningful value propositions for players that benefit their gaming experience.”

None of that explains why people should care about NFTs or how they improve a gaming experience, of course, but that’s not stopped Ubisoft from doubling down. Guillemot has reportedly told workers that gamers will eventually accept them in the same way as they did with DLC, cosmetic items, season passes, etc., areas that Ubisoft knows all too well.

Ubisoft is facing more than just criticism from gamers. A recent report claimed it is losing workers rapidly in what is being called a “great exodus” and “the cut artery.”

They probably haven't watched the last South Park episode yet... 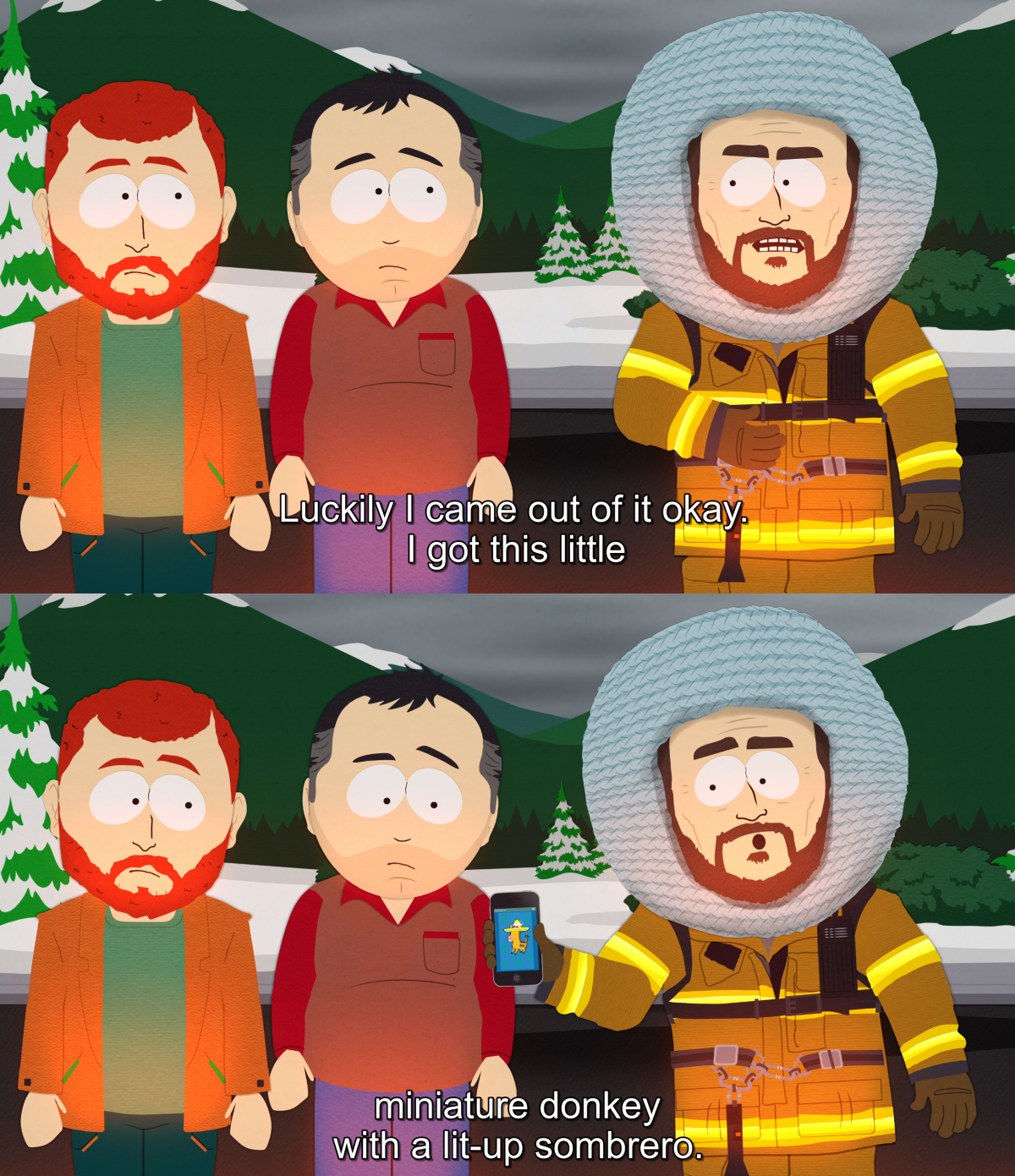 Ubisoft's main "Principle" is to get as much money out of consumers as possible. Even if it has to resort to scams.
Reactions: fb020997, Shaitan, Grinnie Jax and 4 others

winjer said:
Ubisoft's main "Principle" is to get as much money out of consumers as possible. Even if it has to resort to scams.
Click to expand...

Or sexually assaulting female staff and have the goddamn CEO himself cover up the abusers and moving them around to shield them from repercussions.

As with all things lately, it'd say Ubisoft are cartoonishly evil if it wasn't both an insult to their victims, employees, customers and even an insult to some cartoons that are less forward in their evil cartoon villain actions.
Reactions: fb020997, sdms96825, Rock Dirty and 2 others

I'm ok with it IF they make a good game. But when the game is mediocre at best and you spend a crap ton of recourses on this kind of stuff,,,,it's a no from me.

I'm sticking to my principle.

Never touching anything done by UBI$oft.
Reactions: Shaitan, sdms96825, psycros and 2 others

They confirmed why they are one of the most hated gaming companies around.
Reactions: Dimitrios and Dimitriid

Dimitriid said:
Or sexually assaulting female staff and have the goddamn CEO himself cover up the abusers and moving them around to shield them from repercussions.

As with all things lately, it'd say Ubisoft are cartoonishly evil if it wasn't both an insult to their victims, employees, customers and even an insult to some cartoons that are less forward in their evil cartoon villain actions.
Click to expand...

Ubisoft: This impacts our bottom line and stock price, we must stick to our principles!!

The Public: Your company is being sued by employees for fostering a culture of "institutional sexual harassment." Where are your principles?

Ubisoft: prin..saw...pal? Is that even a word, we have never heard such a made up word before.
Reactions: fb020997 and Dimitriid
M

This is where no regulation gets you.
Reactions: Dimitrios
K

Not buying anymore ubisoft games. I'll pirate them before buying any games with NFTs in them.
Reactions: fb020997
F

midian182 said:
Ubisoft isn’t put off by what many see as another shameless cash-grab, and it fully intends to push ahead with its plans while staying true to its “principles.”
Click to expand...

That's ok Ubisoft. You stick to your "principles", and we will not buy from you. Yeah, bye bye!
Y

"Stick to their principles" who says they aren't funny.
N

Ghost Recon Breakpoint....I have the game. My brother purchased it for me, since we enjoyed what Division/Division 2 offered, he thought we might like giving this game a try.

He purchased the game for us just after it launched back in October of 2019. Neither of us have installed nor played it. I feel kind of bad that he spent $50 on a copy for me and we haven't played it yet...

On the other hand, if Ubisoft is gung ho on pushing stupid as$ed NFT on their games, I'll be sure to go out of my way to avoid anything from them in the future and I'll make sure my brother does the same.

Right now it really won't be that hard of a thing to do. Ubisoft hasn't really had anything good come out lately. The Tom Clancy games are getting old and the Assassin's Creed games have pretty much been crap since AC2....too much rehashed and not enough originality (like a John Madden football game or CoD or BF game). It won't hurt my feelings if I don't support a two trick pony company.
T

The NFTs in the way they are used are in the same category as a person's signature poster or a ball or shoe or even yt plates for access subscriber landmarks or like sports medals etc. It is something like a souvenir or trophy.

They are usually given at zero cost (or almost) as a gift or after an achievement. If someone buys a work in physical form from a very popular artist who is now dead and can not produce more (for example mona lisa from davinci) or an item from a very popular athlete who has retired or cards from a popular franchise maybe then, because of all this popularity, there is a market of people who want to own or exchange those items that have no practical value but only emotional value, so for that reason (having a market around them) they can have financial value. But for a random image I do not see where the value of any kind is.

The idea behind NFTs was to represent in a secure way contracts or stocks in a company and not random abstract images.
T

To sum it all up. Nobody cares about your NFT. If these are Ubisoft's new principals, then it is time to move on. I like producers with better principals.
Reactions: wizardB
You must log in or register to reply here.