Most people know that ants can lift over 100 times their body weight, and when they work together, these tiny insects can move objects much bigger than themselves. Researchers at Stanford Universtiy have been studying this ability for a while and have now developed a team of six tiny robots that use the same principles to move a car.

The researchers at Stanford’s Biomimetics and Dexterous Manipulation Laboratory have created the microTug robots. The miniature machines use a special adhesive inspired by Gecko toes that allow them to pull incredibly heavy weights, but is still able to detach easily.

This biomimicry is partly how the six robots, weighing a total of 3.5 ounces, can pull a 3900-pound car, which you can see in the video below. Graduate David Christensen, who was one of the authors of the paper on the robots, says this feat is the equivalent of six humans moving the Eiffel Tower and three Statues of Liberty. 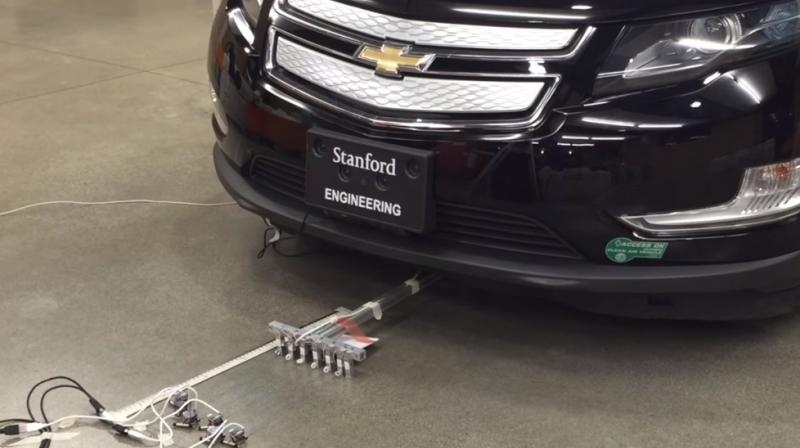 “By considering the dynamics of the team, not just the individual, we are able to build a team of our ‘microTug’ robots that, like ants, are superstrong individually, but then also work together as a team,” Christensen told the NY Times.

Researchers found that the best way for the microTugs to work together to pull the vehicle was by using a very slow and steady synchronous movement. The video is shown at 20 times speed, but it’s still an incredible achievement.

Although it’s not mentioned in the video, this technology has many potential real-life applications, including emergency situations where heavy objects need to be moved but there isn’t space to use large machinery.