There’s no place like home row, am I right? “ASDF" and "JKL:” aren’t just the keys our fingers rest upon, they’re our friends. Fine, that may be a bit much, but we have all undoubtedly come a long way from typing our very first letters. In my earliest days of typing, the keyboard setup was confusing and random despite all the fun games on my Typing Instructor CD-ROM.

Eventually, navigating the layout became second nature, and here I am today, typing at reckless speeds without so much as needing to look down. Seven-year-old Devin would be quite impressed. It’s probably safe to say that many of us don’t know much about what lies beyond the standard QWERTY keyboard. But there’s so much more. So much. Let’s take a look at some popular and regional keyboard layouts. They probably won’t have you switching anytime soon, but it’s worth a peek. The more you know, and all that.

Note: This feature was originally published on 06/02/2016. We have bumped it as part of our #ThrowbackThursday initiative.

Don’t go looking for "Dvorak" spelled out on the layout like I did - it’s the name of the guy who patented it in 1936, August Dvorak. He felt that QWERTY was a pain to use and developed his layout to be more efficient. Studies seem to agree and maybe that’s because when using Dvorak, 70 percent of strokes are on home row (vs. 32 percent when using QWERTY.) When using Dvorak, you’ll notice that more than half of your strokes are with the right hand. Dvorak did this on purpose, based on the fact that most people are right handed. Interesting note (at least to nerdy writers): All the vowels are in home row.

Colemak could be considered QWERTY-lite. There are only 17 differences in key layout between the two, plus a second backspace key replacing the Caps Lock key. Colemak is a combination of Coleman (the last name of the creator) and Dvorak. The layout clearly isn’t just a revamp of Dvorak, though, it’s an attempt to fix issues with Dvorak while not intimidating QWERTY users. Looking at the Colemak layout as a QWERTY typist, it’s easier to imagine switching over than if you were looking at Dvorak.

Once you go down the rabbit hole of keyboard layouts, it becomes pretty clear that QWERTY has a strong hold on a lot of the world. For example, QWERTZ is a slight adaptation commonly used in central Europe (Germany, Austria, the Czech Republic, and other nearby nations.) The Z and Y keys are switched for two reasons. First, because Z is used much more than Y in German. Second, T and Z are used together so much it makes sense for T and Z to be side-by-side. You can also find umlauted vowels (ä, ö, ü) on this layout and there’s an Alt Gr key to access a third level of key assignation.

Here’s another example of an almost-QWERTY layout. This one is used by most French-speaking countries, though France and Belgium each have their own national variations on the layout, and not everyone likes it. Q swaps with A and W with Z in the top row. The semicolon is switched for the M key. If I were to sit down at an AZERTY keyboard, the biggest change would be that the number row function is changed. Now let’s visit a galaxy far, far away from QWERTY. The Maltron keyboard looks uh.. unusual, but it’s designed with ergonomics in mind – so it might ease your aching hands and sore wrists. The keyboard is separated in chunks, with the numbers in the middle. The left-hand square of letters has ANISF for home row, and the right-hand square’s home row is DTHOR. The company behind this unusual keyboard, PCD Maltron, started in 1977 as a response to issues with the QWERTY layout and has found some fervent supporters.

So what about countries where the alphabet is completely different from the Latin-based English alphabet? In Russia, the Cyrillic alphabet is used, and since 1917 (when Russia reformed its alphabet to remove some letters), JCUKEN (also known as YCUKEN, YTsUKEN and JTSUKEN) has served as the default keyboard layout. The regular QWERTY layout is maintained as a secondary function in the same keyboard as shown on the photo above.

Let’s look at another French keyboard. The BÉPO layout is designed to ease programming and boost efficiency (similar to Dvorak.) This particular arrangement is based on statistical study of the French language. People say typing with BÉPO is easier because the keys used most often are on the home row. BÉPO has a lot of other characters that are missing from the AZERTY layout, including: 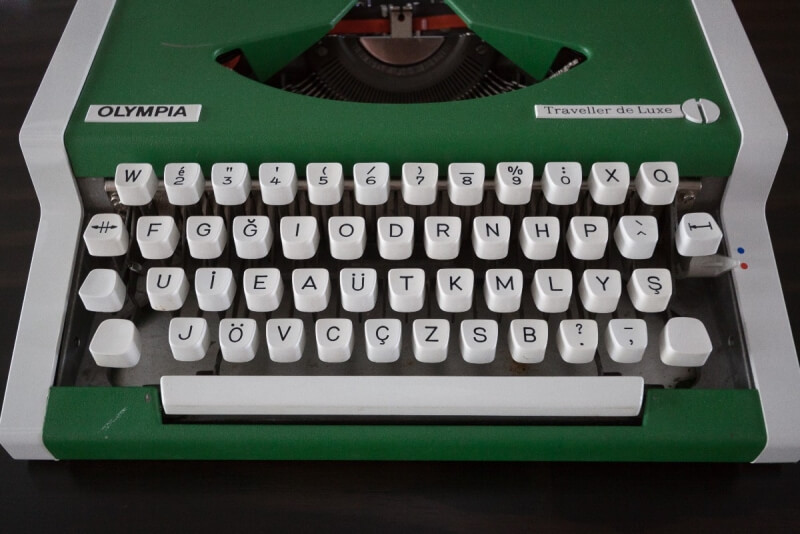 Looking up this keyboard layout lead me to the most interesting (and the first) article I’ve ever read about Turkish typewriters. QWERTY keyboards are very common in Turkey, but in 1955, the Turkish F-keyboard was invented to make typing the local language more efficient. Think about it this way: “Just look at Scrabble: every language carefully assigns a different value to each letter, and puts a certain number of each tiles in the bag. Playing Scrabble in Romania with English tiles wouldn’t make a lot of sense, and yet throughout most of Europe we still use typewriters based on how English works.”

Let’s look at one more keyboard layout for French-speakers, shall we? It’s in the news because the government is getting some pressure to change the long-standing default, AZERTY. This layout came around in 2003 and is a keyboard built for those who speak Breton, a language spoken in parts of northwestern France. When comparing this layout with AZERTY, the A switches with the Breton letter C’H (similar in sound to the German ‘ch’) and Z swaps with W.

The "any layout" keyboard Is this what the future looks like? The Optimus Popularis was a ridiculously expensive, vaporware-esque, ultra-customizable keyboard. Will it be the next QWERTY? Maybe, but probably not. Who can shell out $1,500 for a keyboard? Unless you type in multiple languages and regularly use unusual characters (calling mathematicians or musicians) it doesn't make sense. But it kind of existed, if you were ever lucky to see one.

Other examples of future keyboard uses include Razer's programmable buttons on their gaming laptops and Apple MacBook Pro's touchbar which leverages an OLED touchscreen for contextual shortcuts. Power users hate it though, as there's no tactile response. Or how about no keyboard? Speech recognition is finally getting a big boost after decades thanks to AI.

Some say QWERTY is lagging behind -- and in non-English speaking countries, it's hard to ignore that QWERTY doesn't make the most sense -- but most people are too busy typing on whatever layout they're comfortable with to bother thinking about it. Just ask kids doing all the tapping on their flat phones.