It’s a graphics glitch so I’ll post here, but I’m not sure if it’s the outcome of some other issue.

RAM:
32 GB
Ran memtest86 for around 5 and half hours (I’ll talk about how this happened)


The issue started while I was doing non processor intensive work. You can see the image below. The error gives the impression of being random. Sometimes it can run for many hours, sometimes it takes 15 minutes to manifest the issue. 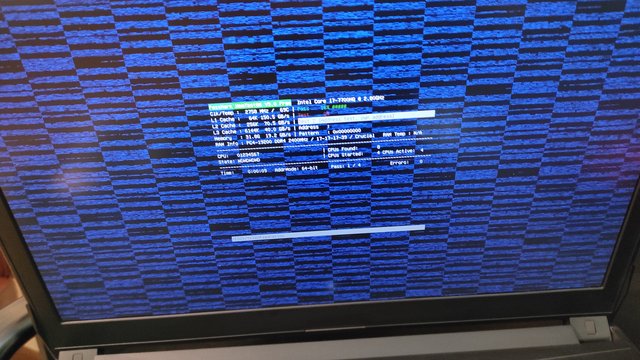 This image is of when it happened during memtest86 (one if the times I tried running it). The blue pattern happens while booting or while on Windows doing anything.

What I considered but didn’t try:

Weird behavior after the glitch: sometimes when I try to turn it on after it happens, the power supply seems a bit funnicky. It turns on and off for a few times, like a reboot loop state.

What I noticed: If I insist on turning it on after the glitch, it happens more often, while booting, or right away after I login or after a few minutes. If I give it some time it takes a bit longer and Windows does not suggest a restore/reset or other options.

I’ve read that it might be some power supply issue as well, but I don’t have much experience with those issues.

What else should I do? Is there a log somewhere I’m missing?
B

Around 2008 there was a class action against NVidia over the 8400/8600M range of chips used in laptops and the Xbox. It was found that there was a manufacturing/design flaw causing them to fail prematurely. I bought a Sony laptop with the graphics chip issue to see if it could be repaired by replacing the chip. I used a specialist company because expensive equipment is needed. The laptop is still working beautifully running W10 but doesn't do any processor intensive work.

Manufacturers are unlikely to make such a disastrous mistake again but the graphics glitches suggest an imminent graphics chip failure. Has the laptop been cleaned regularly is one question to ask? Good luck with pinpointing the problem.
Reactions: xapien
A

RMA that laptop ASAP if it is under warranty.
If it is not under manufacturers warr. if you bought it with your CC you might have an extended warr as a benefit on every purchase. If you're not sure ask your CC for details.
If it is NOT under any warranty and you're good with fixing laptops see if you can get a replacement main board off of ebay.

If you're not good a swapping parts in laptops then see who is local to you that is.

What you are seeing is video card memory (vram) failure of some kind.
Because it is random I suspect the chips themselves are fine and it is an electrical issue. Either the board is damaged by cracks etc or the chip's solder is not bonded as it should be.

You need to decide if repairing the laptop is worth the time and aggravation.

I have been lucky where I've found a same model laptop with a bad screen on ebay and then repair a broken laptop by swapping the screen, ram, hdd, etc.

Getting a used name brand business laptop from ebay and then upgrading the ram and hdd to a ssd is how I have done many times in the past. Then in the future getting spare parts is dead easy. I've got two lenovo t420's that are actually the result of merging 4 machines and keeping what works recycling what doesn't.
Reactions: xapien

Hey guys, that was stupid, is what I can say. I should have tried to remove parts and test them.

xapien said:
Hey guys, that was stupid, is what I can say. I should have tried to remove parts and test them.

You ran memtest for a number of hours and it found zero issues but you removed one of the sticks of ram and all is good now? Amazing =)
Reactions: xapien

Kshipper said:
You ran memtest for a number of hours and it found zero issues but you removed one of the sticks of ram and all is good now? Amazing =)
Click to expand...

Right? I was flabbergasted. I assumed it wasn't RAM. I read that it can have at least 4 more steps in memtest than what I ran; I ran 4 steps, the suggested count.

It was an expensive laptop when I bought it, 3 years ago, so I had to try everything.
A

You might find that after popping the ram back in again it still works fine.
Mechanical connectors really do like to be reseated on occasion.
Reactions: xapien

Aranarth said:
You might find that after popping the ram back in again it still works fine.
Mechanical connectors really do like to be reseated on occasion.
Click to expand...

I tried, in different slots. No luck.
A

Well darn oh well
You must log in or register to reply here.