Here we are looking at the visual and performance differences between the various DirectX versions. First let’s take a look at the visuals... 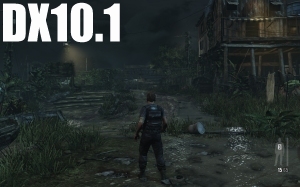 The DirectX9 version features very basic lighting and many of the edges are quite jagged as we are not using MSAA, just FXAA. Moving to DX10 improves lighting, making it more realistic and shadows become softer but some of the finer details are lost, the grass for example was less dense. Moving to DX10.1 appeared to be a downgrade as the lighting became less realistic with less shadows. Then we found that DX11 also keeps the brighter lighting with fewer shadows which accentuates the grass a lot more. 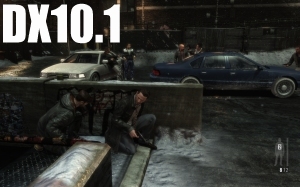 Above we see that even in DX9 mode Max Payne 3 remains a highly detailed video game. Moving to DX10 we notice that the graffiti on the wall is more emphasized and perhaps less realistic when compared to DX9. However things like the car tires look better as they are truly round and the characters faces are sharper, while the road surface looks more lifelike.

This time we believe DX10.1 looks better than DX10 as it keeps all the impressive visual improvements of DX10 while the graffiti improves its look. DX11 looks the best, though we must admit there is almost no real difference between DX10.1 and DX11 in the above screenshots. 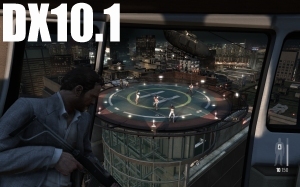 Using DX9 we can see above that the show detail is poor, lighting is basic and objects/characters in the distance are poorly rendered with minimal detail. Moving to DX10 corrects a lot of this providing smoother shadows, more detailed and accurate lighting and the objects/characters further away are much sharper. When going from DX10 to DX10.1 we saw little difference in the scenario above and it was a similar situation when comparing the DX10 modes to DX11. That said, DX11 did bring a few subtle improvements that we believe are more noticeable when playing rather than looking at static screenshots.