Google on Tuesday unveiled Pixel, its first branded smartphone in the post-Nexus era. With it, Google is squarely taking aim at Apple and its new iPhone 7. Here’s everything you need to know.

Google’s Pixel smartphone is powered by Qualcomm’s Snapdragon 821 SoC, a quad-core chip with two high-performance cores clocked at 2.15GHz and two energy-efficient cores running at 1.6GHz, along with 4G of LPDDR4 RAM and 32GB or 128GB of local storage.

Around back is a 12.3-megapixel rear-facing camera with an f/2.0 aperture lens and 1.55 micron pixels that Google spent a year working on. Google touched on a few camera features including smartburst in which you hold down the shutter button to capture multiple images and let the phone select the best of the bunch and HDR+, a nifty low-light technique in which the camera snaps several photos and stitches them together instead of capturing one long exposure that may end up being blurry. The search giant was quick to point out that Pixel received a rating of 89 from DxOMark, the highest score ever for a smartphone camera. For comparison, the Galaxy S7 Edge and Sony Xperia X Performance earned a score of 88 while the iPhone 7 could only muster a score of 86.

What’s more, Google is offering free, unlimited storage of full-resolution images and videos shot with Pixel via Google Photos meaning you won’t run out of storage at the most inopportune time.

Connectivity shouldn’t be an issue as Pixel includes a USB Type-C connector as well as Bluetooth 4.2. Oh, and there’s a 3.5mm headphone jack – another solid jab at Apple. Powering the device is a 2,770mAh or 3,450mAh battery depending on which model you purchase. Quick charging technology allows you to get up to seven hours of runtime with just a 15-minute charge.

As you’ve no doubt seen in leaked images, Pixel is constructed of a combination of aluminum and glass with no unsightly camera bump on the rear. It’ll ship running Android 7.1 Nougat and will be the first with Google Assistant built in. It'll also come with a dongle that'll make transferring data from your existing phone a breeze.

For all of the features and benefits that Android affords, the mobile OS has been plagued by fragmentation over the years as handset makers and wireless carriers more often than not take their sweet time in rolling out updates. As a Google phone, Pixel owners shouldn't have much to worry about in this category as the handset will automatically download and install the latest Android updates in the background, making the process about as seamless as possible.

Pixel will also come with a custom launcher that features round icons and apps that are just "a swipe away." The overall look and feel of the skin looks quite clean and polished, somewhat reminiscent of the vanilla experience that Nexus devices offered but with some subtle changes.

Worth noting is the fact that Pixel doesn’t appear to be water resistant nor does it have a microSD card slot for local storage expansion.

Google is partnering with Verizon in the US but will also sell Pixel unlocked via the Google Store. Pixel also works on Project Fi, should that be your preferred wireless provider.

Pixel will be offered with your choice of 5-inch (1080p) or 5.5-inch (2,160 x 1,440) AMOLED display – both coated with 2.5D Corning Gorilla Glass 4 – in three colors: Very Silver, Quite Black and Really Blue (a US exclusive). Pricing starts at $649 and $769, respectively, with both phones being made available to pre-order starting today. They're scheduled to ship later this month.

This will fail.
Reactions: petert, oranuro, ScubaRhys and 1 other person
F

If Nexus stood for "good phones at a good price", I can see why they killed it off.
I like some of the specs but that pricing is scary. Has Google not heard of the Chinese yet?

Even Apple pulled off water resistance but Google didn't... For shame. No reason not to anymore.
Reactions: ScubaRhys

Did they have to make it look just like an iPhone? The note 7 is a work of art compared to this knock off.

I wish they would have stuck with the nexus model of making good mid-high range phones.
Reactions: Godel 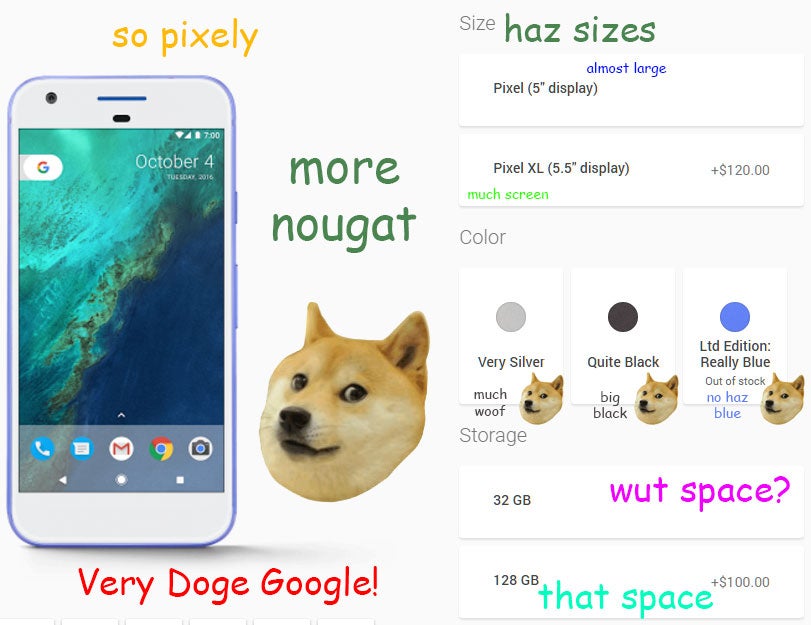 And even if you can get past ALL of that ... the pricing is pure stupidity.
Reactions: bluto 2050
O

And even if you can get past ALL of that ... the pricing is pure stupidity.
Click to expand...

I agree the pricing blows, but the updates might be worth it, along with project Fi, and storage, maybe the camera too.
R

WTF? $769? That means the UK price will probably be around £900 inc VAT. Google need to realise that people don't buy Apple just because they are expensive, they buy Apple in spite of the price. Or perhaps Google have decided they don't actually want to sell phones any more.

Edit: Ooops, I should have actually looked at the Google store, it seems like the UK is actually getting a small discount on the US price. £599 and £719 which given that includes VAT and the current exchange rate makes it $633 and $760. Still ridiculously expensive for a Google phone though.
Last edited: Oct 5, 2016

Man, the way Shawn Knight writes this article is like product promotion sweet talk by Google itself.

Wait until next year's model then this one will sell for 1 cent. Next one will add waterproofing, expansion slot and removable battery - rumored by me...

But aims should be made at same innovative technology as well.
S

I'm calling failure due to the fact that the phone is butt ugly yet still costs loads. It looks like a knock off iphone from China!

As time goes on phones will become more like watches, form and style will sell rather than raw specs.
Reactions: oranuro
M

IAMTHESTIG said:
Even Apple pulled off water resistance but Google didn't... For shame. No reason not to anymore.
Click to expand...

I like what HTC did: if it gets water damaged (or you mess up unlocking the bootloader) within the first year, they replace the phone for free.

Remember: the S7 active is "waterproof", and we saw how much that meant. Even the ones that actually are have their limits in terms of time and depth. I'll take a good warranty over a 'protection feature' any day.
Reactions: bluto 2050

I did that; but with a galaxy s2. The day finally came, with android 7.0, that I wanted the mobile payment thing, oh and also project fi. So, I got a nexus 6p. I think its awesome, although I still cannot get project fi in my area, sob sob. But I no longer need to wait on Samsung's pathetic update procedure. And no, phones will not soon cost $1000. But rather phones will soon be free. As you will be, owned, by the N.W.O. And it will be mandatory that everybody carry the phone of 'the man's' choice.

IAMTHESTIG said:
Even Apple pulled off water resistance but Google didn't... For shame. No reason not to anymore.
Click to expand...

lol Apple did it at the expense of losing the headphone jack.

Techstar said:
lol Apple did it at the expense of losing the headphone jack.
Click to expand...

You do realize all the other water resistant smart phones out there have headphone jacks, right? So that has nothing to do with it...
You must log in or register to reply here.