CrisisDog said:
Naah, it's the fossil fuel companies that would protest Congress and not allow this to happen. My local electric company seems to be on the ball for attempting to acquire renewable energy...
Click to expand...

This is why energy production should never be given to the private sector. In Canada, ALL of our power generation is done by public utilities owned and operated by the provincial governments. Hydro-Quebec, specifically, is recognised as a global hydroelectric superpower with an installed capacity that dwarfs those of most countries, despite only being the electricity provider of a single Canadian province. Its output is so great that Ontario, New Brunswick, Vermont, New York and New England all buy huge amounts of electricity from Quebec.

Private corporations are generally unwilling to invest in large and initially expensive projects like hydroelectric or nuclear stations because they value short-term profits over long-term goals. In the short-term, generating electricity with petroleum is more profitable so that's what they do. Private power generation is therefore BAD. I don't know what the situations are in most countries but, in Canada, with purely public power generation, 81% of our electricity generation is non-carbon-emitting. 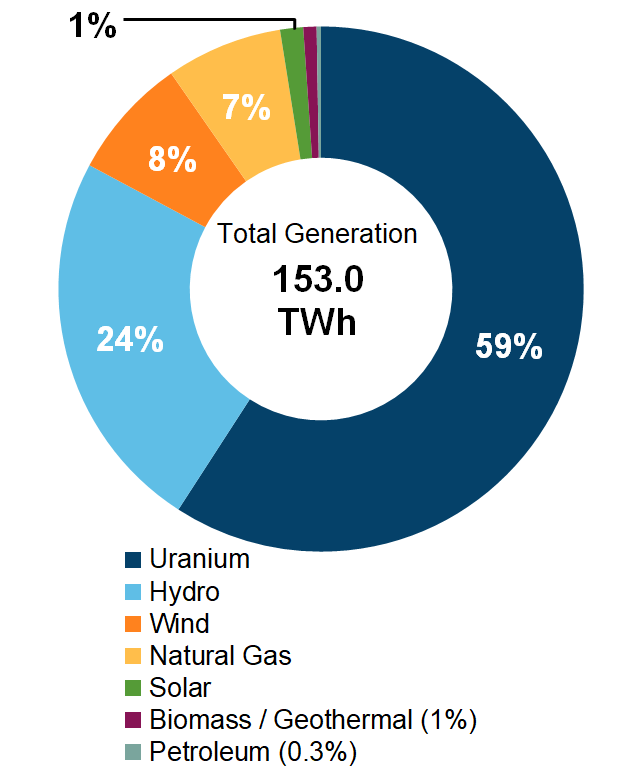 I think that you'd be extremely hard-pressed to find countries using private power generation that come anywhere close to that number.

Now, of course, many Americans would just dismiss this as "socialism" (which generally shows a lack of intelligence) but nobody can argue with the results. When profit isn't the driving force behind electrical power generation, the benefits are far more than just environmental. The cost to the individual citizen is also dramatically reduced. For example, the average rate paid for electricity within the province of Quebec as a result is only CA$0.06.319/kWh for energy consumed up to 40 kWh per day times the number of days in the consumption period (1st tier) CA$0.09.749/kWh for the remaining energy consumed (2nd tier). Good luck finding lower electricity rates than that anywhere in the world. This is why hydroelectric generation is one of the best in the world, second only to geo-thermal. It's cheap, plentiful and extremely reliable.

I shudder to think of what it would be like to live in New York or Boston. Miami does remarkably well but that's because its electicity is heavily rate-regulated (something uncharacteristic of Florida's usually right-wing mentality).
Last edited: Jan 24, 2023

This isn't a new idea, using gravity to power an endless rope into a volcano.... there is no storage same concept derived 500 years ago.

Avro Arrow said:
Private corporations are generally unwilling to invest in large and initially expensive projects like hydroelectric or nuclear...When profit isn't the driving force behind electrical power generation, the benefits are far more than just environmental. The cost to the individual citizen is also dramatically reduced.
Click to expand...

Complete nonsense. Due to its terrain and hydrographic features, Canada has, per-capita, the world's largest supply of hydroelectric capacity -- so much that, should it choose to exploit it, it could power not only itself, but all of the US, Mexico, and Central America too. Once the dams are built, the electricity is essentially free --- yet, despite this great natural wealth, citizens in Canada pay slightly more for electricity than do those in the USA (0.179/kW-hr vs 0.162). Canadians actually pay up to 50% more for electricity than some US states, states which must generate the bulk of their electricity by burning coal and pricey natural gas. Hard to believe, yes, but true.

And the private sector would **love** to build nuclear and hydroelectric plants. But the only thing environmentalists hate more than nuclear reactors is dams. All the US's major hydroelectric facilities were built before in the 1970s or earlier, before the "Free the Rivers" campaign took firm hold. A few privately-owned nuclear plants have been attempted to be built, but lawsuits from environmental groups and permit delays from state and federal agencies turn a 5-year project into 25+ years. Meanwhile, you're paying interest on billions of dollars, the permits you DO have keep expiring every few years, causing costly re-certification, and the NRA changes the building regulations at least 3 or 4 times, causing you to rip out large portions of work and re-engineer them. So a $5B reactor wind up costing $30B or more.
J

Right away, from just the headline, I could tell this was all hype. "Power the whole planet"??? In order for a **storage battery** to do that, it first has to get the energy IN. And all that hype on wind/solar will simply not provide even a fraction of that. And the folks proposing this suggest that's the only source it will be stored from. other sources can be throttled back when demand is low, unless you're talking about nuclear and hydroelectric, and the tree-huggers are making sure we don't have THOSE options available to us.

Quite simply, electric generation is going to require a wide range of generation sources, and that will include the very systems the far-left are trying to shut down. And it will also need to be much more localized, with regional and national systems being a *supplemental* source. But such solutions are too complex for the likes of the wokesters at MIT and such to comprehend.
Reactions: AlaskaGuy
You must log in or register to reply here.