A hot potato: Gamers who thought that the current crop of RDNA2 and RTX 30-series GPUs were already demanding might be in for a surprise, if the most recent drop of leaks is to be believed. Both kopite7kimi and Greymon55, established leakers in their own rights, seem to be in agreement that some of Nvidia's upcoming Lovelace GPUs will land somewhere north of the 400W range. These figures would presumably be for the top models of the RTX 4000 series, built on AD102 silicon, successors to the RTX 3080 / Ti and RTX 3090.

Besides pushing the GPU core as hard as possible, a great deal of this power budget will come from the continued use of the hot and power-hungry GDDR6X memory on Nvidia's top models.

Separately, Bondrewd of the Beyond3D forums left hints on Navi 31, the top SKU from AMD's RDNA3 line-up, suggesting that the multi-chiplet GPU would sit below 500W in total board power draw and below 350 mm² per graphics core die.

With an estimated size of 600-650 mm² for the two GCDs alone, and perhaps 800 mm² for the whole GPU (when including the Infinity Cache-bearing MCDs), 3Dcenter believes that Navi 31 will end up in the region of 450-480W for total board power.

Although the GPUs are nowhere near from release, these numbers are already concerning. In addition to being a bigger strain on PSUs and cooling in smaller cases, the growing power draw of GPUs is increasingly leaving gaming laptops behind. Size and weight constraints of gaming laptops limit their cooling ability, and TDPs have remained stubbornly fixed as a result, with mobile GPUs rarely given more than 150W to work with, and that's the bulkier models that have lots of cooling.

That's excluding how growing die sizes have locked out the top end GPUs from laptops entirely, with the laptop RTX 3080 and RX 6800M actually using a lower tier silicon than their desktop counterparts. Or how partner cards routinely draw even more power reference numbers, like EVGA's FTW3 pushing the RTX 3080 to almost 400W.

Surely 400W+ GPUs are unlikely to trouble top end battlestations with immaculately designed cooling and kilowatt power supplies. But for regular gamers -- those using smaller cases, or on laptops, or keeping hold of an ol' reliable 500W PSU -- they're becoming a major problem.

Also doesn't help that it will push your electricity bill up by a fair bit if you game regularly, and will mean you have to spend money on a larger power supply where getting good 80 plus efficiency is important as your load at idle (I assume) would be well below max capacity.
Reactions: Avro Arrow

TechSpot Elite
I don't see anything close to this in laptops, even with efficiency getting better every generation. My gaming laptop uses 2, 240 watt power bricks and I can't see how getting anymore would be possible. At least for now.

My guess is that whichever company this rumor is mainly addressing doesn't has confidence in getting sufficient allocation on future nodes so it makes sense: Next generation they know they probably won't have miners to pick up the slack (Though it remains to be seen)

So they know gamers *traditionally* want more power without caring much about power requirements. So how do you sell them on new products without actually improving the fabrication process for the foundries? Well just slap in a couple pounds of copper on them, literally: up the power limits to about as much as they can handle.

Trying to figure out nVidida's way of thinking...

Banned in a few places over power consumption, hah-hah, now take that! 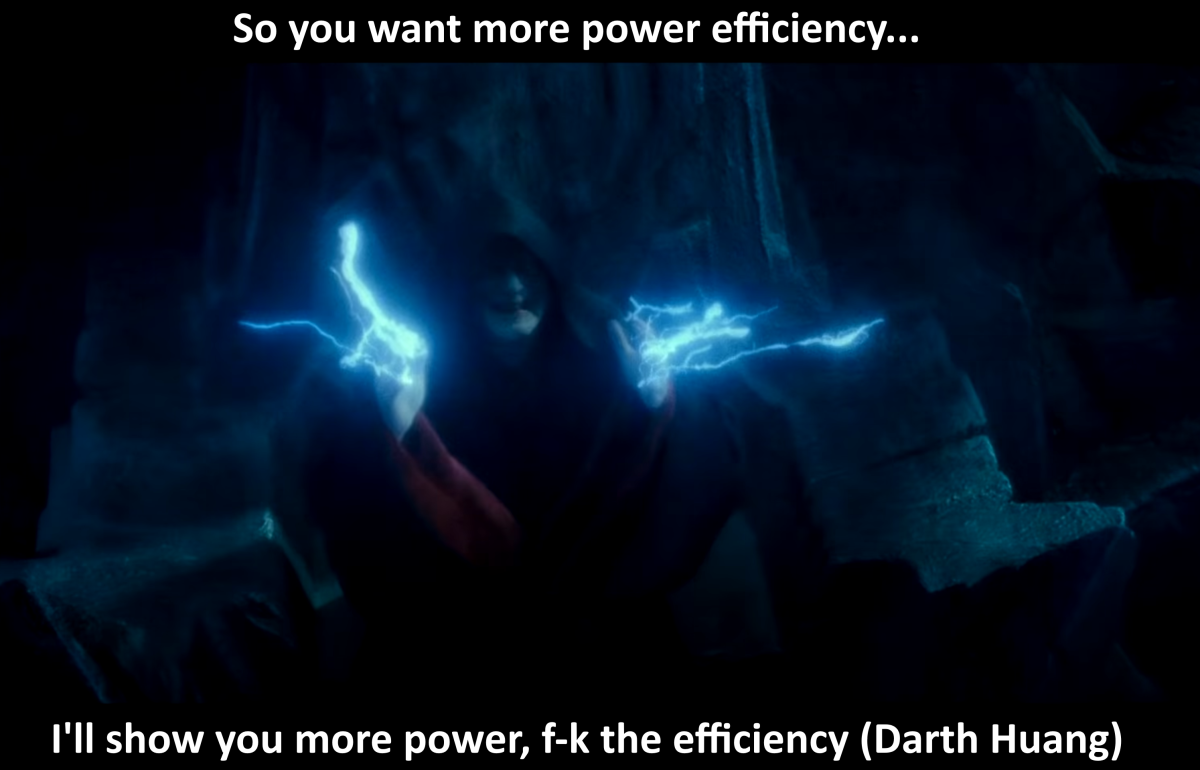 VariableSpike said:
Also doesn't help that it will push your electricity bill up by a fair bit if you game regularly, and will mean you have to spend money on a larger power supply where getting good 80 plus efficiency is important as your load at idle (I assume) would be well below max capacity.
Click to expand...

I always buy the best powersupply I can afford. I like to keep 20% about what I need and always go for atleast 80+gold. My first real gaming computer was fried the first moment I hit the power button because I bought a cheap PSU. Luckily I got an RMA on all the parts but never gain.

Same mind set as buying tires for my car. Never buy cheap tires, everything you car does it does through the tires. It doesn't matter how much horsepower you have or how good your brakes are if your tires can't handle it
Reactions: Reehahs
K

I do, I'm still using it.
Reactions: ron baer, Reehahs, 0dium and 5 others

At stock clocks maybe.
you overclock the thing kiss that good bye. you looking at 250 watt +
G

Lets just be absolutely clear before this spreads to another thread, that is not true. Dell’s PCs were banned because they used too much power in idle/ standby. The regulations in those US states does not limit how powerful a computer can be in total power.
Reactions: BSim500, TechZel, MarkHughes and 6 others
A

“ Although the GPUs are nowhere near from release, these numbers are already concerning. In addition to being a bigger strain on PSUs and cooling in smaller cases, the growing power draw of GPUs is increasingly leaving gaming laptops behind.”

I mean if you are properly optimising your models for top performance in a portable form factor and a full desktop, the laptop is never going to keep up. Efficiency is great, but that efficiency should be used in desktops to push performance even further.
F

grumblguts said:
Look at the 3090 pulling over 500 watts pure madness.
Click to expand...

Madness that’s not even worth it IMHO. I’ve tried pulling 480w with my 3090 Strix OC and the handful extra frames you get isn’t worth the heat, electricity and coil whine.
Reactions: godrilla

I use my Computer/3090 Daily for hours upon hours. It ain't hurting me.

I'll wait for the final product before I start worrying about this as I usually do without regret.

Faelan said:
Madness that’s not even worth it IMHO. I’ve tried pulling 480w with my 3090 Strix OC and the handful extra frames you get isn’t worth the heat, electricity and coil whine.
Click to expand...

fl21289 said:
This isn't even out and already banned in the great state of California

And ironically, California paid me $5,500 to buy my electric car and it uses up to 270kW when flooring it, which is over 500x as much power as this prospective GPU could use. Nothing wrong with having power, but California likes to decide what is the right and wrong kind of power is, even if it is connected to their "clean" power grid lol.
Reactions: HofyPC and Reehahs
M

I was gonna make the exact same comment, ha.
Reactions: Reehahs and Kosmoz

QuantumPhysics said:
I use my Computer/3090 Daily for hours upon hours. It ain't hurting me.
Click to expand...

I use mine 24/7 for Eth. Decided to repad and dropped the temps by 18C. The other one dropped 16C.
Reactions: Reehahs

Supposedly, the 750's were only 50 watts. (Never measured it though)

Nvidia RTX 4090 leaks suggest the card is now in production, will be first Lovelace GPU...