In brief: A bipartisan group of US lawmakers proposed a bill last week aimed at curtailing personalization algorithms. If passed, it would let users choose whether or not to allow an online platform's curation algorithms to use their personal data to serve them "specialized content." Axios notes that the latest version of the Filter Bubble Transparency Act would stop tech platforms from using "opaque algorithms" to control what content users see without first notifying them and gaining their consent. The bill makes exceptions for things like smaller tech companies, research groups, and age-appropriate content filters.

The bill would apply to any online platform with more than 500 employees that gathers data on more than 1 million users or averaged over $50 million in revenue in the last three years. This is the House of Representatives' version of a bill the US Senate introduced in June of this year, sponsored by senators John Thune (R-SD), Richard Blumenthal (D-CT), Jerry Moran (R-KS), Marsha Blackburn (R-TN), and Mark Warner (D-VA). Representatives Ken Buck (R-CO.), David Cicilline (D-RI), Lori Trahan (D-MA), and Burgess Owens (R-UT) sponsored the House proposal. The lawmakers say the bill will help online platforms users better understand how algorithms control what they see. "The more transparency consumers have with respect to how social media and other internet platforms prioritize content on their services, the better," Thune said on the June version of the bill.

Blumenthal called big tech algorithms "manipulative" and accused them of exploiting users. YouTube's recommendation algorithm, for instance, has often been a target of criticism.

The law would be similar to Apple's App Tracking Transparency policy, which requires apps to allow iOS users to opt-out of data collection used in targeted advertising. The new rules have reportedly caused social media platforms to lose billions already.

That last one I can understand but the other types should not be exempted. Its the only way we bring down the information gatekeepers that are trying to control us all.
Reactions: wiyosaya

Targeted advertisement is a drug.
Reactions: Reehahs and wiyosaya

IMO, this should, if necessary, be expanded to cover the upcoming OTA TV standard, ATSC 3.0. ATSC 3.0, when widely adopted (it is being rolled out ATM in the US), will allow any OTA TV station to monitor your viewing habits and send advertising directly to your TV through your ISP/internet connection. https://harmelin.com/thought-leadership/what-is-atsc-3-0-and-what-does-it-mean-for-advertisers/ 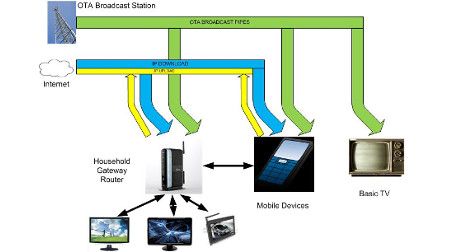 The hardest part of the ATSC 3.0 proposed broadcast standard to get one’s head around is probably the IP transport piece. By JEFF BAUMGARTNER Reprinted from Light Reading ATSC 3.0, a new broadcast signaling standard branded as “NextGenTV,” is starting to break away from the TV screen and gain its first foothold on the smartphone. One Media 3.0, a subsidiary of Sinclair Broadcasting, said it has taken possession of...

This is, IMO, a step in the right direction, however, I think we need a much more wide-spread adoption of "opt-in" for many more online scenarios.
Last edited: Nov 10, 2021

I don't like Big Tech but I hate Big Government even more! The politicians in Washington have proven for DECADES they cannot be trusted and usually only work for their own gain. We have far too many government regulations as it stands, they cripple innovation and hurt America FAR more than they help it.
You must log in or register to reply here.