Staff member
Gaming peripherals can often times make or break a game. Titles like Rock Band and Guitar Hero wouldn't even exist if it weren't for the clever instruments that go along with them and let's face it, flight simulators aren't nearly...

When I first got a PC in the late 90s, I was all about different peripherals and controllers. My first (and favorite) was a Microsoft Sidewinder Force Feedback Pro. My next PC did not have a gameport so I got the Force Feedback 2 with USB, which I still use, but I miss the shift button from the original which effectively doubled the number of buttons on the joystick.

Another controller I really liked was a wheel very similar to a R/C car controller. It was basically a pistol grip, with a trigger for a throttle and brake and a small wheel on the right side of the controller as well as a few thumb buttons. I used it until I got a Saitek force feedback wheel and pedals.

Probably my least favorite that I owned was another Sidewinder product - the Dual Strike. It was a gamepad jointed in the middle with some sort of twist action that was supposed to be good for FPS games, but I never really got used to it and quickly went back to mouse and keyboard.
E

I've had several controllers for PC over the years. On the early years ('98-'99) I even had a TWO button gamepad connected to the joystick port on the soundcard. I also owned a Microsoft Sidewinder Freestlye Pro (quite a gimmicky controller). I still have Microsoft Sidewinder Force Feedback 2 in perfect condition (not much of a fan of flight sims so I use it rarely). Nowadays I only use the Xbox 360 controller. I'm planning to upgrade to the Xbox One controller once they start selling a "Windows" version with cable at a good price.

I think one of my favorite peripherals was the track-ball used on the Atari 5200 to play Centipede and Millipede. Was really sturdy and nearly had the feel of the arcade version.

A few things come to mind when I think about peripherals. I think everyone will agree that ball mice are the worst. My personal worst in recent times was a wireless mouse that came with an HP laptop I bought. The input lag on it was HORRIBLE. I'm talking about lose to half a second in lag. Wasn't a huge deal, but there was a period of about 3 months in college where my trackball broke and I had to use it if I wanted to play games.

I have 4 favorite peripherals. 1 The first trackball I owned. I have no idea what model it was, I just remember that my dad threw out the ball mouse we had first chance he got and came home with this awesome trackball. It was similar to a kensington expert mouse in that it had a HUGE ball in the middle and kind of flat. The cool thing about it, and keep in mind I was 9 years old, was that it was clear and glowed green when the computer was turned on. When you would click it the green light would go off and it would glow red. Both these lights were under this clear trackball so this thing REALLY lit up.

Well that awesome thing ended up breaking in 2005 after almost 8 years of service. From there I got a logitech trackman marble which did a great job until I broke it in college. I had to wait until I want home for the summer to get a new one. I ended up settling on the logitech G500 and have had that for the last 4 or so years.

As far as controllers go I had some complicate joystick with my first computer. Currently I use 360 control for my PC for casual single play games.
G

The worst? TrackIR, hands down. Most overpriced piece of junk I ever bought.

There was article like this one last year unless I mixing it with different site, no/yes? But that PowerGlove picture and everything. I'm fairly certain it was on TS. LOL

The only gaming peripheral I ever used tried apart from the regular mouse and keyboard was a XB 360 controller for PC. What a waste of money, it was a silly thing and I hated it. If I can't play a game with a mouse and keyboard alone I don't bother.
Correction: I also own a Logitech G27 steering wheel, for driving games it just can't be beaten, that is one gaming peripheral I love.
M

I've wanted to try a TrackIR for Freespace, but can't justify the money these days.
M

I got a lot of use out of my Nostromo n52. It took time to setup, and it didn't fit on my desk all that well, but it was great for MMOs. 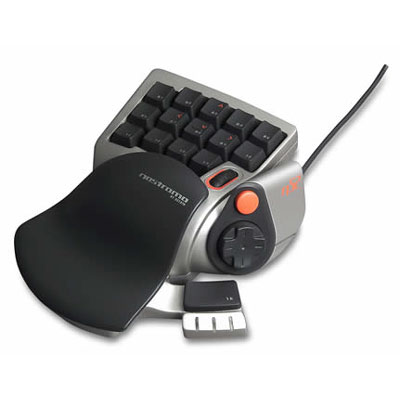 Anyone remember this PoC?

Had to be one of the worst ideas Nintendo ever had. I remember it was the most frustrating thing to mess with as a kid.

The sega saturn analog pad that came with knights was awesome at the time.

Best and worst eh, well honestly being an avid collector of video games, consoles, and peripherals I have many that I would say are terrible .

If I had to say what my favorite is, it would probably be the Logitech G19 Keyboard just for having the screen when playing games to display extras right now.

For the worst, I would say its a toss up between many items in my household. I guess by worst I would say its my Virtual boy (I guess it counts as a peripheral and console?) just because as much as I enjoy some of the games on it I end up with a headache if I play for much time. Worst functionality though would probably have to go to the Sega Activator just because I swear it does not register things no matter how hard I try unless I fling myself over it.

Shout out for the best
Origianl gamecube controller
L

Nintendo Scope for the Snes. It was a nice little bazooka shaped controller for the Snes, had a few novelty game on, which were good, even when drunk. Just a shame there wasn't much support for it. Like most I've had several different game pads, mice, joysticks. The one that I wish I could find a modern day version of is the Space Orb 360. For those who have never heard of it here is some info. http://www.cwonline.com/store/view_product.asp?Product=1108

I could so easily see it being a great controller to go with the Oculus rift.
G

Actually, as bad as the Powerglove was, it did have one redeeming quality. It's rapid fire control was actually better than anything Nintendo had in it's other controllers at the time.
G

Ah, the Nintendo Power Glove! I wanted that so bad for Christmas the year it came out! When I finally opened the last present and realized I didn't get it I cried. I was embarrassed, since I was raised better than to cry over presents, but I built it up so much in my head!

Tanstar said:
Ah, the Nintendo Power Glove! I wanted that so bad for Christmas the year it came out! When I finally opened the last present and realized I didn't get it I cried. I was embarrassed, since I was raised better than to cry over presents, but I built it up so much in my head!
Click to expand...

I did get one for Christmas and I can tell you that you missed absolutely nothing. Everyone hated it and it only made games exponentially harder to play.
G

Microsoft sidewinder dual strike was my favorite controller. It was the best game pad because it had the accuracy of a keyboard and mouse.

I'd like to see a decent flight simulator for use with Archos VR glasses and an LG G3.
You must log in or register to reply here.

Weekend Open Forum: What was the absolute worst video game ever produced?
2

Weekend Open Forum: Is the demise of single-player games an exaggeration?
2

Weekend Open Forum: What was the first game you ever played?
2 3