MSI showed off at Computex today what could be the future of its gaming laptop line-up: an all-aluminum 0.85-inch thick laptop packed with high-performance hardware. Dubbed the GS70 Stealth, the 17.3-inch gaming laptop features an ostensibly premium-quality design and a correspondingly premium price tag around $1700. One item though which MSI hopes will separate the GS70 from the pack is special trackpad that doubles as a pint-sized touchscreen. 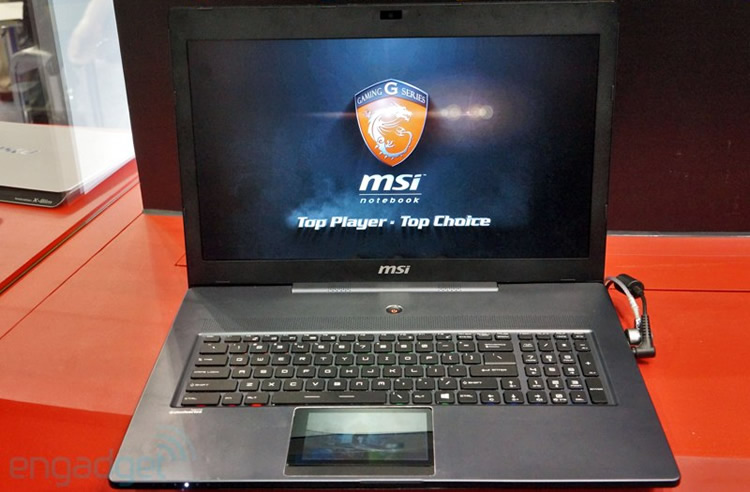 The GS70 is a concept design, which typically means it's still too early to know for certain what the final product will look, perform and behave like; however, the company is expected to release a virtually identical system sans the fancy touchpad in August.

Overall, the GS70 appears to be MSI's answer to Razer's Blade family of laptops. It features a relatively light and thin profile (0.85-inch thick at around 6 pounds) and boasts some serious gaming hardware -- a GeForce GTX 765M paired with a Haswell-based Intel Core i7. Spec-wise, this is on-par with Razer's recently announced offerings.

Trackpads that double as miniature, configurable displays aren't exactly a new concept. Again, Razer's Blade line-up already sports this technology. While it does provide some legitimate functionality, a number of hands-on accounts have labeled the feature somewhat "gimmicky". Being a concept design though, MSI has not yet added any sort of functionality to the trackpad, so it will be interesting to see how MSI differentiates its touchpad from Razer, if at all. One obvious difference for now though is location: the 17-inch Razer Blade places its touchpad right side of the keyboard where MSI's is in a more traditional location below the keyboard.

The GS70 will be yet another shot in MSI's recent volley of freshly minted gaming notebooks armed with the latest-gen AMD Radeon HD 8700M-series and Nvidia 700M-family GPUs.