Even though the Xbox One X does not launch for a few more days, embargos have been lifted and we are seeing our first real look at Microsoft’s shiny new console. Following almost a year to the day after Sony’s refresh of the PlayStation 4, Microsoft is looking to shake up the market with hardware that is even more powerful than the PS4 Pro.

The decisions by both Microsoft and Sony to release hardware upgrades mid-cycle has been a risky and controversial move. The trend had been to release trimmed down versions (Xbox One S and PS Slim) of consoles mid-cycle but with prices for 4K displays starting to dip, both companies decided to upgrade the hardware to accommodate higher resolutions.

The PS4 Pro has received its fair share of criticism, with some saying that it is not worth upgrading if you are a current PS4 owner and don't have a 4K display (the thought being that it does not offer the value of a next-gen console).

The XB1X is more of a significant jump in power than the PS4P, so how will it measure up? Those who have had early hands-on experience with it are speaking up and most have favorable opinions. It's not without its drawbacks, however.

Tom Warren with The Verge had thoughts that were in line with early PS4 Pro judgments:

While the power inside is unquestionable, Microsoft’s focus on hardware specs isn’t matched with launch titles that really show off 4K gaming. Forza Motorsport 7 debuted last month, so the Xbox One X isn’t launching with any exclusive AAA games. At $499, you’re really paying for the pure hardware here, and you’ll need a 4K TV to get the best benefits. If you’re an original Xbox One owner, you’re going to be really pleased with the improvements. For everyone else, it’s going to depend on what games you play. Hardware only goes so far. The XB1X seems to struggle with HDR output but as Ars Technica’s Sam Machkovech and Kyle Orland point out, this seems to be a lack of software support:

Owners of HDR-compatible TVs should temper their expectations for the pop on Xbox One X games in general, though. Some “Xbox One X enhanced” games will technically get the HDR label to pop up on your TV screen, but these only deliver enhanced 10-bit color depth. This added color gamut doesn’t include the luminance data that helps make bright areas of a game scene really pop with extra light.

The lack of full HDR is most evident in Halo 3’s otherwise impressive update for the Xbox One X, which also includes a brand-new upsampling of its polygonal assets. The color data here is certainly broader with the update, and the color balance looks better than in the Halo: Master Chief Collection version, but the romps through jungles and military outposts still look a little flat without that heightened luminance range.

However, when a game supports the 4K hardware well, results can be on par with its high-end PC cousins according to Alex Cranz with Gizmodo:

Besides delivering nearly as good a picture quality as a high-end gaming PC, the picture also looks a little nicer than what I get out of my Playstation 4 Pro. That console is Sony’s 4K HDR box, and it’s not quite as powerful as the Xbox One X. They both handle HDR well, which means better graphics —in Assassin’s Creed Origins light reflects off water more naturally and seems to drift through the open weave of my cloak more realistically. But the PS4 Pro simply doesn’t appear to upscale content to 4K as nicely. You might not even notice unless you’re a nerd who likes to sit close to the screen and flip between the same scene in the original Destiny on both consoles over and over again, but yeah, there’s a little blur to the playback on the PlayStation 4 Pro. The graphics just aren’t as crisp ones the Xbox One X. 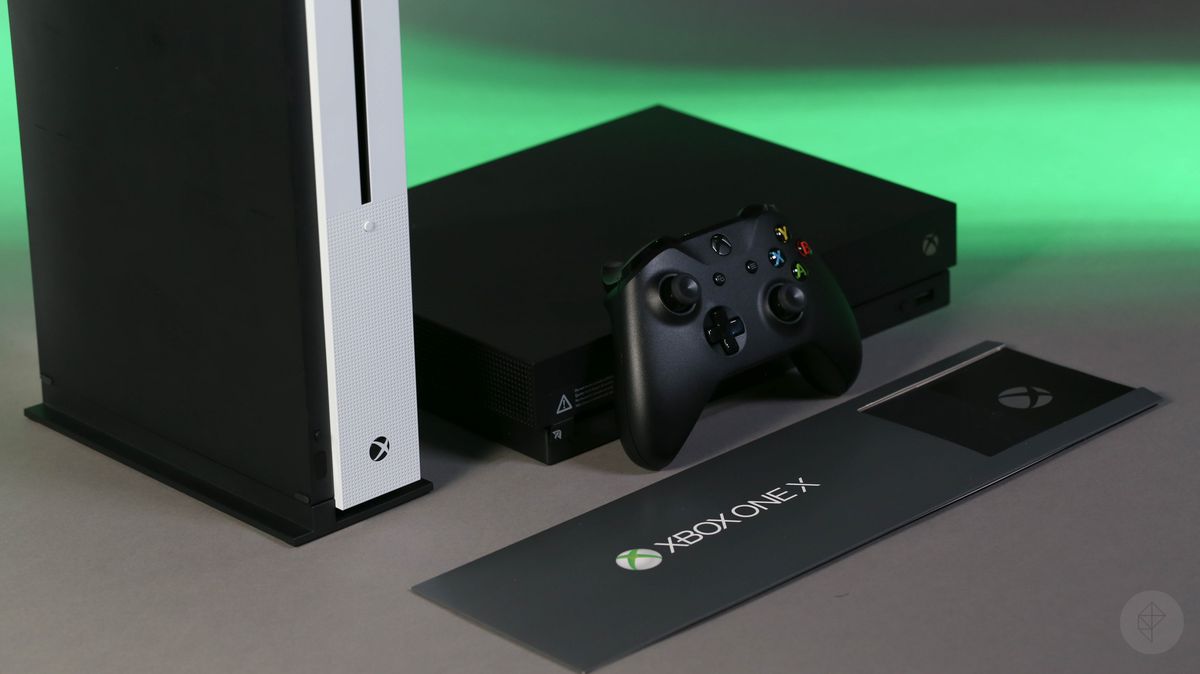 Graphical fidelity is all fine and good, but what does that extra processing power mean for gameplay? TechCrunch’s Matt Burns put it to the test using Gears of War 4:

I played latest Gears last month, and yet I played through a good chunk again and for the first time in a Gears game, felt like the system had enough headroom to provide the smoothest possible experience.

I literally said “wow” during the opening fight scene on Gears of War 4. I had played the game since it was released last month, so it felt like the right place to start. The game is already gorgeous, and even on a One S, the gameplay is smooth. However, on the Xbox One X, the gameplay is smoothed out to a silky experience.

For Gears of War 4, players have several options. In the game’s setting menu, players can select between Visuals or Performance modes. Select Visuals and the game plays in 4k at 30 fps (the pretty mode). The Performance option bumps the framerate to a 60 fps target and keeps the resolution at 1080p (the smooth mode). But this switch is only for the campaign mode. The Horde mode plays at 60 fps in 4k with adaptive resolution scaling to maintain the high frame rate.

Nick Pino from TechRadar says that the Xbox One X does suffer from one significant flaw:

Its 1TB hard drive might seem like enough room to store your entire library but, consider the fact that all these new Enhanced for Xbox One X titles use 4K image assets, and suddenly 1TB doesn't seem so big anymore.

Gears of War 4, for example, takes up 100GB on the Xbox One X. Another flagship Xbox game, Forza Motorsport 7, will be about the same when it releases its patch. Quantum Break, the Sci-Fi shooter from the studio behind Alan Wake, comes in at an internet crippling 178GB. Together, three of the Xbox One X’s most popular games will take up around 40% of your hard drive space. 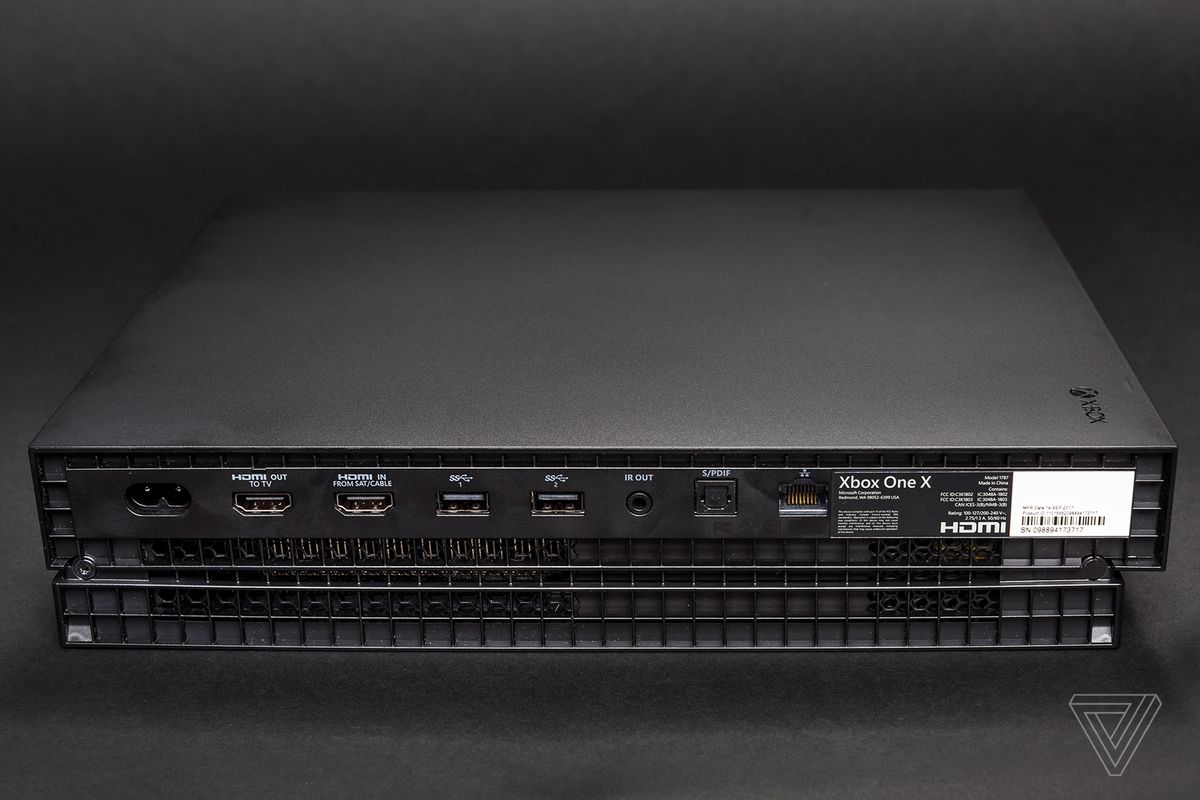 Image via James Bareham, The Verge

Speaking of the back, the Xbox One X’s rear port array is identical to that of the Xbox One S, although the latter’s power input is farther from the other ports. Even the power plug is the same, so if you’re upgrading from the white console to the black one, you can simply swap the boxes in your entertainment center and use the same cables. If you haven’t done the math, then yes, that means that just like the Xbox One S, the new Xbox lacks a Kinect port. You’ll need a proprietary USB adapter to hook up the voice-enabled camera — and this time, Microsoft isn’t giving it away to customers who are upgrading, which says a lot about just how dead Kinect is. (I don’t have the adapter, so I was unable to test my Kinect with the Xbox One X.)

With Redmond bragging of the XB1X’s virtual reality capability pre-release, Wired’s Brendan Nystedt finds it confusing as to why there is still no word on a VR headset:

One thing I find perplexing is the lack of virtual reality. It might not be as important as on the desktop, but Sony’s PSVR has become an appealing gateway drug for curious gamers. Since you don’t even need a jacked up PS4 Pro to use Sony’s VR headset, the Xbox One X seems like a shoo-in for an affordable mixed-reality experience. But there’s still no official word if or when Microsoft will offer Xbox users a taste of VR. With its muscular GPU, the Xbox One X could give Sony’s VR a run for its money, but until there’s a headset and software, it’s off the table.

Devindra Hardawar of Engadget points out that Microsoft’s price point might be a bone of contention for some considering a holiday purchase:

The biggest knock against the Xbox One X is its $500 price. The PS4 Pro launched at $400 last year, and there's a good chance we'll see plenty of deals around the holidays. If your friends are on Xbox Live, or you're a devotee of Microsoft's first-party franchises, then the X makes more sense. If you just want to play third-party titles that come to both platforms, though, the PS4 Pro is clearly the better deal.

If you're looking to upgrade from an original Xbox One, and you have a new TV, the One X might be more compelling. It's faster and offers more features than the One S, and more importantly, it'll last you much longer without needing an upgrade. There's also plenty of wisdom in simply waiting a while before you buy the One X, especially if you haven't moved to a 4K TV yet. The new console can make games look better on 1080p sets since it'll supersample high-res textures and have more graphical effects, but it's simply not worth the upgrade since those TVs don't support HDR.

Aside from the few issues mentioned, all the reviews had overall favorable ratings for the Xbox One X. While it does have enough power to juice up your current games in 1080p, it still seems that it's best suited to those who already have 4K displays.

The $500 price point is a bit high, especially going into the holiday. We’ll have to see if Sony exploits that weakness with a price drop on the Pro. The potential need for an external storage solution to supplement the 4K assets also looks to weigh the box down from a price perspective.

The Xbox One X launches next Tuesday, November 7. Since brick-and-mortar stores are expecting shortages in some regions, it might be a good idea to grab a pre-order from Amazon while they last.