In brief: Do you want to create a massively successful YouTube channel with millions of subscribers? According to a study, there are two things that will help bring in the viewers: video games and kids.

The Pew Research Center looked at over 40,000 YouTube channels with at least 250,000 subscribers that existed through late 2018, analyzing the videos they produced in the first week of 2019. This equated to almost a quarter-million videos, totaling 48,486 hours.

The results illustrate YouTube’s global popularity. Out of all the videos Pew examined, just 17 percent of them were fully in English. But these tended to be more popular, generating almost 100,000 views on average during their first week, compared with 50,310 views for those in other languages.

For English-speaking videos, topics related to video games or gaming proved to be very popular. In a separate analysis of over 30,000 English-language videos, Pew found that 18 percent featured video games. These received an average of 122,000 views and tended to be longer than other types of videos. The least common subject was politics, which featured in just 4 percent of all the videos posted by popular channels. 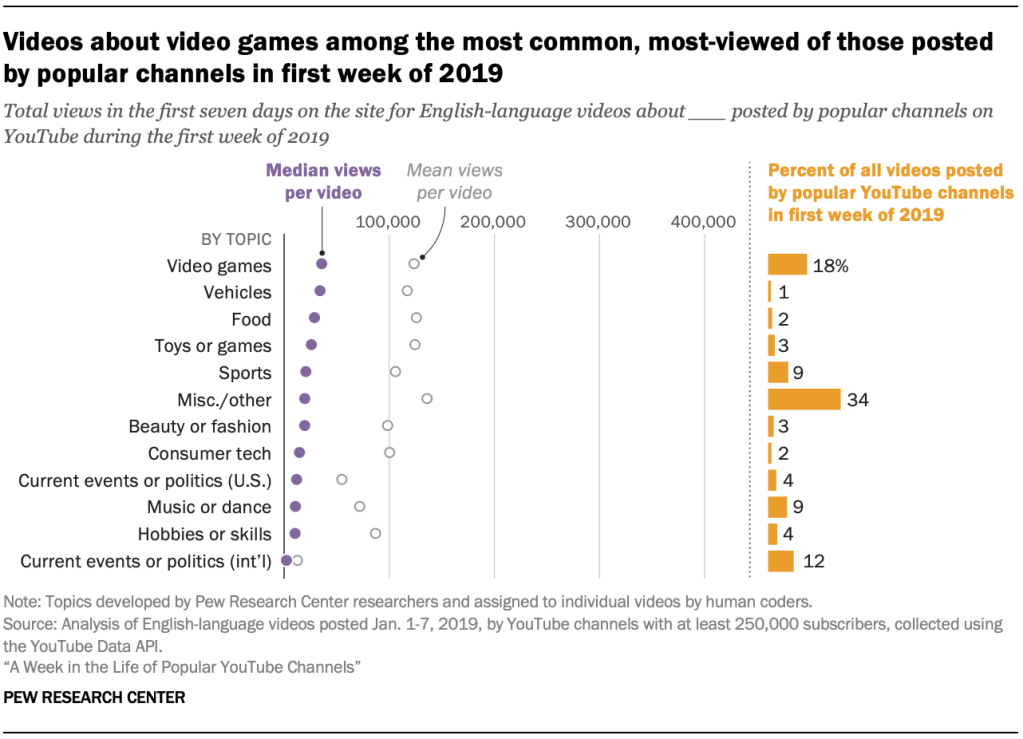 The other popular type of video was those featuring or aimed at children. Any that starred a child who appeared to be under the age of 13 “received nearly three times as many views on average as other types of videos.”

“The very small subset of videos that were directly aimed at a young audience and also featured a child under the age of 13 were more popular than any other type of content identified in this analysis as measured by view counts,” the report states. This is despite YouTube requiring that its users are over the age of 13.

While YouTube has a separate app for younger viewers called YouTube Kids, it brings in a fraction of the main site’s viewers. But the company is reportedly looking at moving all children’s content to the app to protect younger people from objectionable content.