theruck said:
I knew I needed the new bios and I do know how to flash it but amd does not allow me to if I do not buy old and new cpu with a new mobo
Click to expand...

I'm curious...
Does the shop where you bought your components not offer free post check + BIOS flashing (if necessary)? I kind of thought this was common practice.
Reactions: 0dium and Avro Arrow

BMAN61 said:
I'm curious...
Does the shop where you bought your components not offer free post check + BIOS flashing (if necessary)? I kind of thought this was common practice.
Click to expand...

He used Amazon - and obviously didn't research what he would need to do before his purchase... and now blames AMD because it didn't work...
Reactions: Danny101, 0dium, Avro Arrow and 1 other person

Squid Surprise said:
He used Amazon - and obviously didn't research what he would need to do before his purchase... and now blames AMD because it didn't work...
Click to expand...

I would much prefer to see an 8-core with higher clock rates along with better IPC than more cores that I'll never use. It's certainly a big change than it was say 10 years ago when the more you spend for performance than the more performance you'll going to get. You really have to consider your actual use case scenario and the comparable investment costs for your needs. It's both easier and harder now.

I admit I'm more of a fan of AMD for their historically lower cost and good enough hardware. Although, they win a fight or 2. (80486DX4_120, AMD-64, Ryzen) They were the chimpanzees to the Intel gorilla firm. When I do my custom builds, I always go with AMD. When I purchase pre-built and laptops, it just depends on whatever is the best value at the time and it can be either one. The wallet, not me decides. Intel and AMD have both done really well and I can't really knock either one. I know that whichever I choose to go with, it's generally going to be a good product.
D

Higher clock speeds are seemingly harder to do with smaller production nodes because the smaller the transistor gates become, the less resistant they are to the thermals caused by higher voltages. This is one of the reasons why it was easier to have higher clock speeds in the past than it seems to be now. When you increase your multiplier, you usually have to also increase your voltage to keep the CPU stable. With production nodes getting so small, the voltages have to be kept down or your fry the CPU.

I'll use the old AMD K6 CPU as an example because it has the core voltage printed on the heat spreader.

The original K6 was manufactured using a 350nm process node. It had a core voltage of 2.9V at 166MHz: 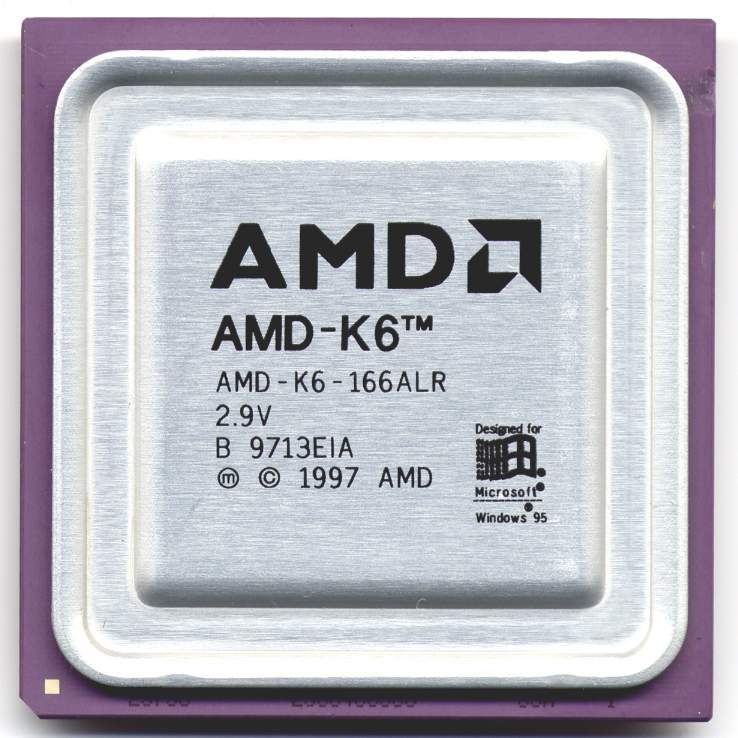 However, once it advanced to 250nm and the clock speed increased by ~30% on average, the core voltage had to be lowered to 2.2V: This means that the first version would probably have been a better overclocker and would be able to reach a higher overclock than the newer one as long as sufficient cooling was given because the transistor gates are just that much larger and sturdier. Unfortunately, overclocking was not a really a thing yet.

Silicon is a semiconductor and therefore has a good amount of resistance to the transmission of electricity. That resistance creates a lot of heat and so the core voltage had to be dropped considerably because the smaller transistor gates were unable to tolerate the thermals generated by resisting 2.9V at 300MHz.

So you see, worrying about some clock speed that is only useful for comparing two CPUs of EXACTLY the same architecture and node is a complete waste of time. The only thing that matters is what the numbers say in Steve's graphs and tables.
Click to expand...

Absolutely! This is why we've seen CPUs with lower clock speeds completely outperforming CPUs with higher clock speeds. And yet, some people still just don't get it and keep asking about clock speeds. I guess some will never learn.
Reactions: Danny101
You must log in or register to reply here.