The iPhone XR has been Apple's best selling iPhone in the US, and its successor is finally here. And because most people default on buying that over the more premium models, the device is now simply called the "iPhone 11."

The iPhone 11 features a 6.1-inch "Liquid Retina" LCD display that is almost identical to the one found in the iPhone XR, the notch included. The Cupertino giant is offering six colors to choose from, including white, black, green, yellow, red and purple. And if you were worried about scratching the casing, the company says the iPhone 11 features a new anodized aluminum finish that should make it more durable. The handset is IP68 water-resistant up to two meters, compared to the previous IP67 rating of the iPhone XR. Apple made big changes to the rear camera system as well as on the front shooter. Where the iPhone XR had a single, 12 megapixel, wide-angle camera, the iPhone 11 has a dual-camera setup that includes an ultra-wide shooter with support for 2x optical zoom. The software has also been upgraded to make use of this, so you'll be able to take a picture and zoom out to see beyond the frame for those situations where you're trying to get the perfect landscape shot.

As expected, the camera features are a big highlight of the new iPhone, and the company has added something it calls "semantic rendering" - a new image processing technique that does over a trillion operations for every photo, adjusting the lighting based on what's in the picture. This allows your iPhone to apply tone mapping more accurately so that your photos look closer to what you can see with your eyes. The front camera features an improved "Portrait Mode," and the same effects can now be applied to pets. Apple is also adding a Night mode, which Android users already have on their Samsung Galaxy S10, Note 10, and Google Pixel devices. The rear camera system allows you to capture video in up to 4K resolution at 60 fps, and slow-mo is now possible with the front shooter as well - Apple says it can't wait for you to take some crazy "slofies."

Powering all this is Apple's next gen silicon, the A13 Bionic. The company touted impressive performance numbers, claiming it has the fastest CPU and GPU in a smartphone. To showcase its abilities, Apple demoed Pascal's Wager - a game with a lot of eye candy in its graphics which is set to be available in the App Store next month. Something else worth noting is the addition of a new, U1 chip that adds support for ultra-wideband, a technology that allows the new iPhone 11 to have spatial awareness. This means it can precisely locate other devices that are equipped with the same chip, allowing you to simply point your phone at someone else's to quickly pair and share files. Still, many would have loved to see Apple release a tracker fob that's been rumored for a while now, but was noticeably absent at the event.

Apple says you'll be able to enjoy one hour more battery life compared to the iPhone XR, as well as faster Face ID, which was noticeably slower than the beloved Touch ID that many users are fond of. Interestingly, Apple is pricing it $50 dollars lower than the iPhone XR, which started at $749. For those of you who want to have one, the iPhone 11 will be available for pre-order on September 13 and will start shipping a week after that.

They gave an incremental upgrade to the Entry iPhones.

What kind of lame *** easter egg colors are those?!
Reactions: Odium and Panda218

LOL, more "colors" add a camera, faster processor, brighter screen (NONE of which will really enhance your user experience) and charge 1,000 bucks or more for the top model. Apple is so lost (as are a lot of the so called "flagship" makers)

p51d007 said:
LOL, more "colors" add a camera, faster processor, brighter screen (NONE of which will really enhance your user experience) and charge 1,000 bucks or more for the top model. Apple is so lost (as are a lot of the so called "flagship" makers)
Click to expand...

How do you figure? People are obviously stupid enough to pay this kind of price, so it would be stupid of Apple NOT to make their phones as expensive as they can. It wouldn't surprise me if they started charging close to $2000 for their "flagship" phone in the next couple of years.
J

Sure, if you look at the device from a year-over-year perspective, it may not prove to be the most exciting hardware/software changes. But a huge part of that discussion I think a lot of people don't address is that there are a lot of iPhone users still clutching on to older iPhones that will be looking at this particular model as an upgrade. When you compare the iPhone 6,7,8 (plus sized or not) to an entry level iPhone 11, it matters in a much different way to those people. What I mean to say is: there are a lot of people out there who couldn't care less about the YoY model differences.

- I sell these things for a living at a major retailer (can't say which, of course)
Reactions: Agnomen and Peter Farkas
J

But...why?! I would like to hear a valid reasoning for this...
Reactions: warLoc

Call me when we have an SE2 in the old SE size chassis, covered with screen fully on the front, 5G (maybe), A13 chip, for the price of the old SE. Looking forward to early 2020 for a refresh to that lineup.

I would be soooo curious to hear what Jobs would say about the current iphone lineup. 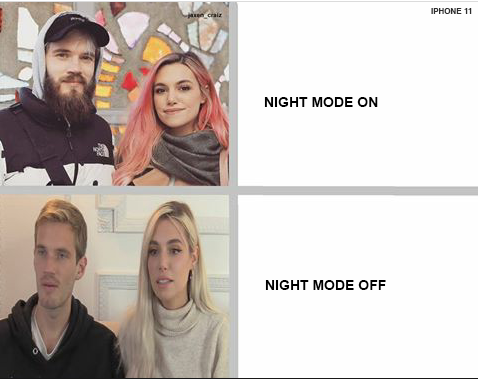 Where is the iPhone SE? I know there are at least 12 of us out there who prefer the 4" screens.
Reactions: jobeard and Peter Farkas

Where is the iPhone SE? I know there are at least 12 of us out there who prefer the 4" screens.
Click to expand...

Peter Farkas said:
Call me when we have an SE2 in the old SE size chassis, ... Wife is still on 6s and she is also still very happy with it. Price and size went really really out of control.
Click to expand...

me too; 6s is an ideal form factor for shirt/coat pockets.

I'm a crazy person to most, but I find that Face ID just eats up too much time and is less convenient. I can easily open my phone with Touch ID if it's on a table, but if I'm using Face ID it requires me to pickup my phone or hunch over the table to look at my device before it will unlock... Sure I could use a PIN instead, but again it's a slight waste of time compared to Touch ID.

Same goes for taking the phone out of my pocket. If I'm using Touch ID the phone screen is unlocked by the time it's in front of my face. Meanwhile Face ID requires the phone to be raised to my face before it's unlocked.

Please note: I have not used Face ID since the iphone X was initially released and I will be testing the new 11's for work once they start shipping. Hopefully there's a big improvement or else the SE will stay in my pocket for work.
You must log in or register to reply here.