Cooler Master has unveiled the latest iteration of its venerable Cosmos series, marking the first true successor to 2007's Cosmos 1000 chassis. The Cosmos II literally brings the series to new heights, measuring approximately five inches taller than its predecessor at 27.7in (H) x 26.1in (D) x 13.5in (W).

Despite being mostly made out of aluminum and plastic instead of steel like its progenitor, the Cosmos II weighs nearly seven pounds more at a commanding 48.5lbs. In fact, it's so big, Cooler Master has placed it in a new "Ultra Tower" form factor, whereas previous versions were deemed "Full Tower."

Although its size might discourage some of you, most hardware enthusiasts seem thrilled at the prospect of owning a Cosmos II. After all, you know what they say about big cases, right? You can fit lots of stuff inside. The new chassis can accommodate up to 13 3.5-inch drives and 10+1 expansion cards. 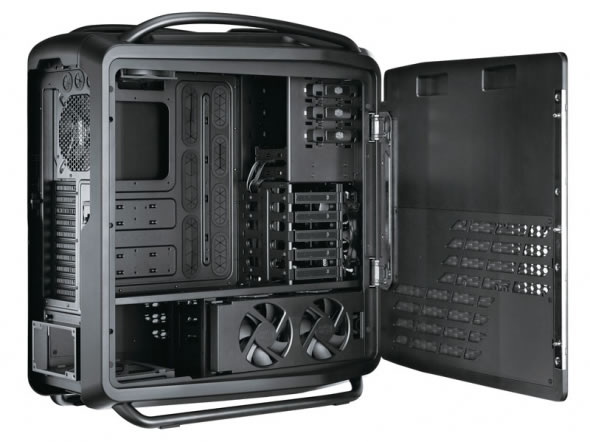 Feature-wise, you can expect nothing short of excellence based on reviews we've seen, including one written by TechSpot community member Red1776. Externally, you'll find two bars above and below the chassis. The top ones are for easier transportation while the bottom set improves airflow under the case.

The front panel has two sliding covers. One conceals an attractive array of buttons for power, reset, fan speeds and LEDs. The other cover glides down the front façade to reveal three 5.25-inch bays and two 3.5-inch dock-X hot-swappable SATA hard drive bays. Both HDD slots are secured by tubular locks.

Front connectivity includes four USB 2.0 ports, two USB 3.0 ports, as well as an eSATA port and audio jacks. As usual, Cooler Master has made liberal use of mesh all around the enclosure, including the side panels, which are more like doors. They swing open on a hinge but are easily removable if desired. 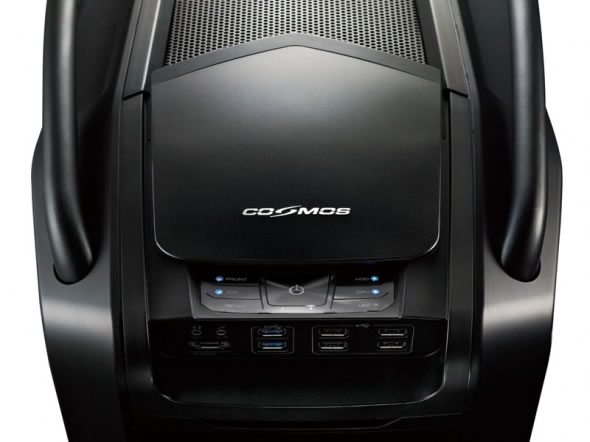 Inside, you'll find a smorgasbord of chambers, bays and grommets. The bottom has a dual-120mm fan bracket in front of a tool-free cage with room for six 2.5 or 3.5-inch devices. This sits beside a bottom-mounted power supply bracket that supports extra-long units and has noise-dampening padding.

The remaining five hard drives can be seated in a sideways-mounted cage placed behind the front panel, below the hot-swappable bays. This can be removed if you need additional space for super long expansion cards (up to a whopping 15.15 inches) or if you simply want to improve the intake airflow.

The primary chamber supports virtually all motherboard sizes, including E-ATX and XL-ATX, while there's enough clearance for the beefiest of CPU heatsinks (up to 7.48 inches tall). As noted, there's plenty of room for PCI-E cards with 10 horizontal openings and one vertical slot for connectivity expansion.

The Cosmos II supports more fan combinations than we can coherently list, but just know that the case is no slouch when it comes to cooling -- be that air or liquid. You'll find tubing holes in various places around the chassis and there is native support for triple radiators in the top-most compartment.

The Cosmos II is expected to crash through shelves this month with a price of roughly $350. Although that's about $150-$200 more than you'll pay for the HAF 932, HAF X or CM Storm Trooper, the price seems well justified. We'll find out for sure when we get our hands on a review unit in the near future.