If bad news from AMD recently left red team fans feeling a little blue, the chipmaker is offering two items which may help brighten their spirits: a new Catalyst driver which boasts significant improvements and an impressive holiday games bundle for anyone eyeballing a new graphics card.

AMD's Catalyst 12.11, or "The Never Settle Catalyst Driver 12.11" as they insist on calling it, aims to deliver a slight bump in performance to gamers across the board. However, 12.11 also marks even more significant boosts for several major titles: Borderlands 2, Civilization V, Dirt Showdown, Skyrim, Sleeping Dogs, Sniper Elite V2 and StarCraft II. AMD claims these games will experience a roughly 10 percent FPS increase (mileage will vary based on settings) while being run at resolutions between 1920x1080 and 2560x1600.

Battlefield 3 players may also want to check out Anandtech's look at the driver, which revealed 20-30 percent performance gains. It appears this update finally puts Radeon cards on par with their relative Nvidia counterparts when it comes to BF3. Meanwhile, Hardware Canucks provides a more sweeping look at the performance changes. 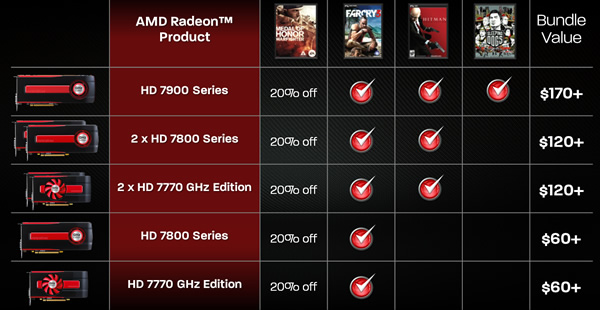 In case you've been wondering, the "Never Settle" Catalyst driver inherits its name from AMD's new Never Settle bundle.  The holiday bundle includes up to three AAA games instead of most past bundles with just one AAA title. Flexing its partnership muscle, Far Cry 3, Hitman: Absolution and Sleeping Dogs appear in AMD's Never Settle bundle deal. It would be remiss to leave out the 20 percent discount voucher for Medal of Honor Warfighter, as well.

Anandtech's Ryan Smith believes AMD's upcoming holiday strategy is more aggressive than he's seen in years -- he's likely right about that. Although PC gamers will have to spend a pretty penny in order to take full advantage of the offer, even budget-minded Radeon HD 7700 buyers will be treated to at least a free copy of Far Cry 3.

If you've been on the fence, this may make AMD look a little more tempting this holiday season. Would the Never Settle bundle nudge you into buying a 7700, 7800 or even 7900 series Radeon HD?