Acer announced today at Computex that it will be auctioning off 25 Aspire R7 "Star Trek Edition" ultrabooks on eBay. Bidding is set to commence on June 14 through June 24 and proceeds will be given to two charities: Save the Children (self explanatory) and A Mission Continues (aid for veterans). Only 25 have been manufactured, so it'll be interesting to see how much Acer's limited Star Trek editions go for. 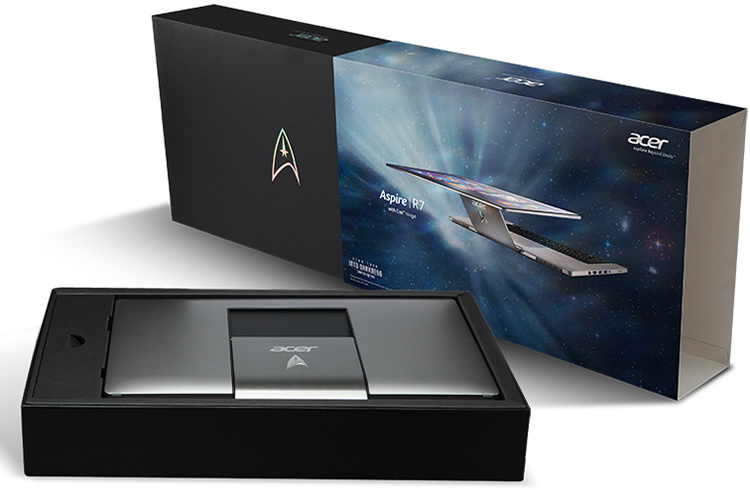 As with most movie-gadget tie-ins, there isn't much that separates the Trek-themed version from a standard-issue R7; the differences boil down to a Starfleet insignia emblazoned on its Ezel hinge and a nifty collector's box. The special edition laptops won't sport a LCARS interface or a di-lithium battery, nor will they integrate voice activation featuring Majel Barrett-Roddenberry's voice. However, when the R7 is adjusted a certain way, it does take on an easily recognizable shape, seemingly inspired by the U.S.S. Enterprise.

The 5.3-pound, 15-inch Aspire R7 features a fairly bold design; its sturdy aluminum chassis places the trackpad above the chiclet-style keyboard, in turn pushing away any available room for a palmrest. Presumably, this is to encourage touchscreen use, but the design left a number of reviewers with a sour taste in their mouths.

Additionally, there's the Ezel hinge which essentially folds and slides the screen out into different positions, depending on your desired use, of course. Bucking traditional laptop lid hinges seems to be a contagious affair as well, with Sony and others also joining in.

Despite its arguable shortcomings, the R7 features some solid hardware for mainstream users though, namely an Intel Core i5 CPU, 6GB of RAM, a hybrid SSHD and 1080p display.