Whether they want to be or not, many PC enthusiasts are well-acclimated to noisy fans; however, some choose quiet operation over impressive overclocking. Of course, that's exactly the problem: quietness traditionally comes at the cost of performance. Noctua's "ANC project" though aims to deliver both desires by adapting active noise cancellation -- not unlike the ANC found in headphones and audio software -- for use on high-speed cooling fans. 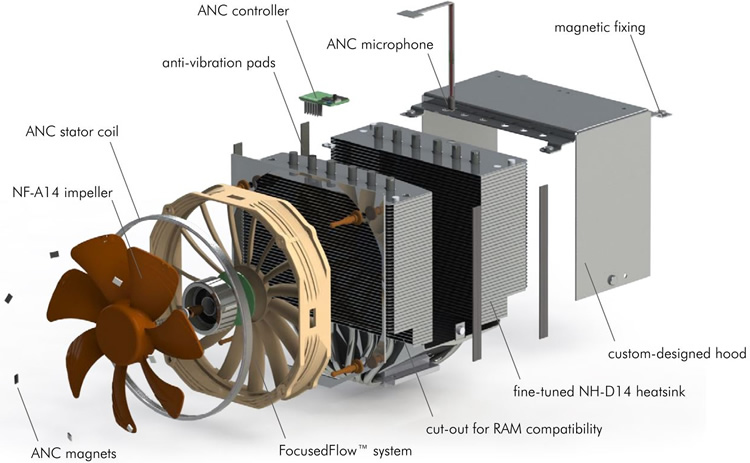 According to Noctua, one possible result is a generous 80-percent bump in airflow without any increase in fan noise. The company's current prototype is NH-D14 heatsink plus a NF-F14 140mm FocusedFlow fan retrofitted with RotoSub's noise cancellation technology.

So, how exactly is noise cancellation applied to a fan? The company's implementation consists of a microphone-equipped heatsink, an electromagnetic coil and fan blades outfited with magnetic tips. Fan noise is largely an inevitable byproduct of vibration and movement; essentially, less vibration means less noise. As a fan generates noise, the heatsink's integrated microphone captures the unwanted sound. The noisy waveform is inverted and physically applied as an opposing magnetic field which acts to counterbalance noise-causing vibrations. The result is a quiet fan that hardly vibrates during operation.

Noctua and RotoSub partnered up last year to create such an ANC-capable cooler. Although Noctua has yet to set a launch date, it has made some strides over the past year on its not-quite-finished prototype. "Middle of 2014" seems to be the most recent target date though. The company has released a new video demonstration of the technology which shows the dramatic difference ANC can make on an otherwise noisy fan.

CPU fans often account for a substantial amount of system noise; however, with technologies like water cooling on the market there already exist products which effectively reduce CPU fan noise. It's unclear how Noctua's ANC HSF will fare against such solutions in terms of price and effectiveness. Also, top-shelf graphics cards generate a ton of heat and come standard with powerful but noisy cooling systems. If RotoSub's ANC technology is to be effective, Noctua will need to roll out solution for GPUs as well.