As we pointed out, G.Skill's new peripherals are similar to some of the products that we have seen from Cougar. The KM780 RGB reminds me so much of the 700K, a Cougar keyboard that I was using before this review, though the KM780 RGB seems to improve upon the 700K's design in almost every way.

The same is true for the G.Skill MX780 RGB mouse, which has clearly been inspired by the Cougar 700M. Again, the MX780 RGB is better in virtually every way as G.Skill has been able to improve the design.

Despite its improvements, G.Skill's prelaunch MSRPs had us a little concerned. The MX780 RGB seemed somewhat pricey at $80 and so did the KM780 RGB at $190.

Fortunately, the MX780 RGB has appeared Newegg for $60, right in line with the Cougar 700M and Logitech G502 Proteus Core. Likewise, the KM780 RGB has launched for $160, or within $10 of Cougar's 700K -- a strong position considering G.Skill's board has extra features that justify the premium.

Assuming you like the MX780 RGB's looks, there's not much to dislike about it. Granted, it isn't cheap, but it holds its own compared to other keyboards in the same territory, including the Corsair K95, SteelSeries Apex M800, Razer BlackWidow Chroma and the Logitech G910 Orion Spark.

The MX780 RGB is highly customizable, has been made from quality materials for a solid feel and is extremely comfortable to use. Features such as the USB pass-through, audio connectivity, large palm rest, volume control dial with LED level indicator and mouse cable holder all add to the keyboard's appeal.

If there was one thing I could change about the MX780 RGB I would want all the LED backlighting to be RGB. The mode buttons along with the media and volume indicator lights are all red and cannot be changed. They look a bit odd when using any color other than red for the key illumination and spoil the design for me.

The only other tweak I'd make might be some kind of space under the keyboard where excess mouse cord could be stored, this would really complement the mouse cable holder and USB pass-through. 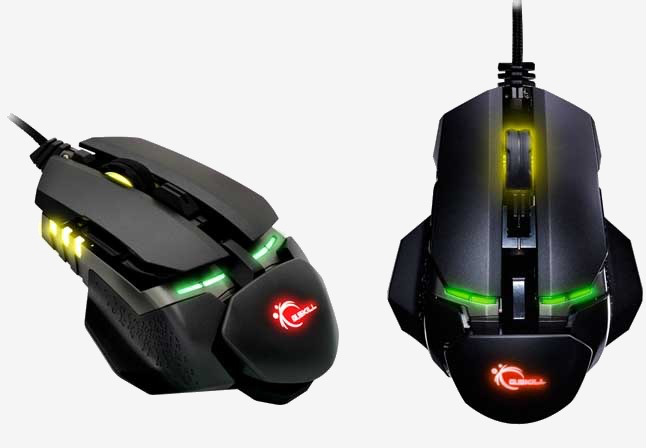 Moving to the MX780 RGB, we were far more impressed with this gaming mouse than we ever imagined. The promotional photos like the one above make the mouse appear very tacky, like it is wrapped in cheap looking plastic with a miss match of lights. After checking out the MX780 RGB first hand we were pleasantly surprised by how nice it looks.

The MX780 RGB's launch price of $60 puts it square against models like the Logitech G502 and Razer DeathAdder Chroma. While I wouldn't go as far as to say it is better than those mice, it's certainly a viable alternative depending on your taste.

The Logitech G502 Proteus Core is perhaps my favorite gaming mouse as I find it extremely accurate and comfortable. That said, I am drawn to the MX780 RGB for its customizability. Those interchangeable side grips are awesome and we certainly appreciated having the option of changing the weight and palm rest.

Having used the MX780 RGB for a few weeks now I've been thinking about what I would change, and not a lot has come to mind. Perhaps one improvement some users might appreciate would be to make the scroll wheel capable of free spinning as well as the gear mode that it currently offers. I only use the gear mode so the lack of a free spin function doesn't really bother me.

There's only really one complaint I have of both the KM780 RGB and MX780 RGB, that being their limited two-year warranty. Such premium products should be backed by a minimum three-year warranty to match the likes of Logitech with its G502. That said, we can't be too hard on G.Skill as established brands such as Corsair and Razer still only offer a one to two-year warranty across their ranges of keyboards and mice.

Overall, G.Skill's first batch of gaming peripherals are among the best we've seen and certainly worth their asking prices. Now all G.Skill needs to do is poach the person coming up with Logitech's killer product names.

Pros: The KM780 is comfortable to use and features a solid palm rest, RGB backlighting, USB pass-through, optional keycaps for gaming, easy to use multimedia keys and an active LED volume indicator.

Cons: At the same time it's relatively pricey, lacks cable management under the board to complement the mouse cable holder, and not all of its LED lights are RGB which spoils the aesthetics a little.

Pros: The MX780 is accurate and comfortable with a height-adjustable palm rest as well as customizable side grips, a weight system and RGB lighting.

Cons: It might be asking for a little much but it would be nice to see G.Skill match the three-year warranty you'd get with Logitech's G502 Proteus Core.