Samsung set the bar for how an Android smartphone should perform with the Galaxy S II last year, and this year's Galaxy S III is no different. Though the international version of the Galaxy S III features Samsung's own quad-core Exynos 4 Quad processor, the version available to U.S. consumers has a dual-core Qualcomm Snapdragon S4 processor clocked at 1.5GHz.

This shouldn't be an issue for anyone, as the S4 processor performs just as well in the Galaxy S III as it does in other devices we have reviewed this year. Samsung has paired the processor with 2GB of RAM, making the S III the first smartphone in the U.S. with more than 1GB of RAM. This combination produces a speedy experience without any lag or stuttering from the phone, even when performing intensive tasks like 3D gaming.

Under benchmark tests, the Galaxy S III doesn't quite hit the same high numbers that other phones like the HTC EVO 4G LTE do, but in real-world usage, the phone is exceptionally quick. Apps open without delay, and even when repeatedly switching between open apps, the S III doesn't skip a beat. One thing of note: when using the phone for long periods or during intense gaming, the bottom of the device gets noticeably warm. 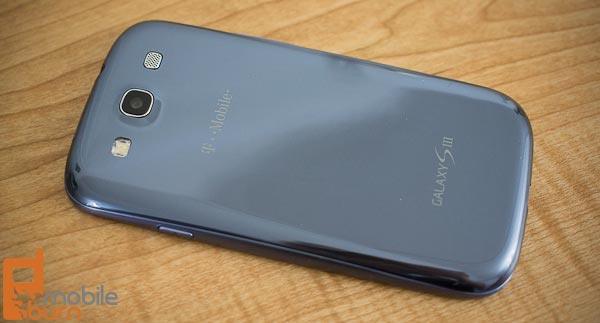 The Galaxy S III runs Android 4.0.4 Ice Cream Sandwich out of the box, though you might not realize it at first. Samsung has installed the latest version of its TouchWiz interface on top of Android 4.0 and it has changed the appearance of the platform quite a bit. The latest version of TouchWiz is an evolution of the TouchWiz 4 that debuted on the Galaxy S II, and it isn't terribly different from an appearance point of view.

If you didn't like TouchWiz before, you probably won't like it now. That said, a lot of what Samsung has done with the interface is for the better. Gone is the robot-inspired Tron motif that stock Android 4.0 has, replaced by bright colors and elements inspired by nature. The nature theme carries over to the phone's various water droplet sound effects and animations, as well as its selection of ringtones. Fortunately, the animations in TouchWiz are more informative than obtrusive, and they don't get in the way of what you are trying to do.

Certain tweaks to the platform that I appreciate are the customizable app shortcuts on the lock screen, toggle switches in the notification bar, and useful app drawer that lets you uninstall apps or hide them from view with only a couple of taps. I also really like the option to display the actual battery percentage in the status bar.

Samsung has built in a number of gestures into the S III's interface, and they let you do certain things like flip over the phone to mute incoming calls, pause media playback with the palm of your hand, and capture a screenshot by swiping your hand across the display. One particularly useful gestures is the ability to launch the camera from the lockscreen by rotating the phone from portrait to landscape orientation. You can also opt to unlock the device by tilting the phone if you are not a fan of the traditional swipe-to-unlock method.

Other enhancements that Samsung has brought to the table include expanded sharing capabilities with the S Beam feature. S Beam builds upon Android 4.0's native NFC-based Beam function to allow users to transfer large files by just bumping two phones together. Samsung says that S Beam can be used to pass a 1GB video from one S III to another in three minutes. It can also be used to share web pages, images, and other content.

Samsung's Smart Stay feature uses the front-facing camera to keep the display on if you are viewing a web page or reading an article. The phone will periodically look for a face staring back at it, and maintain the screen brightness for longer than the time out setting would allow. In good lighting, Smart Stay worked as advertised, but when the light levels fell (when you are reading in bed, for instance) the reliability of Smart Stay fell as well.

The other major feature that Samsung includes with the Galaxy S III is the new S Voice personal assistant. S Voice is a virtual clone of the Siri personal assistant that Apple introduced on the iPhone 4S, and lets users interact with the Galaxy S III through speech. You can launch S Voice from its app icon or by double pressing the home key. Like Siri, S Voice can be used to check the weather, make appointments, set reminders, and perform web searches. S Voice does have a couple of tricks of its own, though, as it can toggle Wi-Fi and Bluetooth radios, be used to snooze or dismiss alarms, and launch some select third-party apps.

In practice, S Voice works about as well as Siri, but it doesn't have the same personality touches and nuances as Apple's product. Its features aren't as fleshed out as Siri's are, either, which isn't saying much. Both services have some functionality, but I don't think either one is where it needs to be to become an integral part of everyday use (that may change with the new features coming to Siri in iOS 6, but I digress).

The Galaxy S III supports the fastest data services available to each carrier that it is being offered with. That means that the T-Mobile version has support for the carrier's 42Mbps HSPA+ network, while the AT&T, Sprint, U.S. Cellular, and Verizon Wireless versions all feature 4G ~LTE data capabilities.

Of course if you buy the Sprint model, you won't be able to use the phone's LTE features until Sprint actually launches its LTE network, which is due to happen sometime this summer.

As far as call quality is concerned, the Galaxy S III performs well, with loud, clear audio from both the earpiece and the speaker phone. The call settings app offers a volume boost and customizable EQ settings, so you can really tweak the sound for your preference. I tested the AT&T and T-Mobile models during my review, and I found call quality to be comparable between both of them. The only complaint I can levy against the Galaxy S III is that the sound can be a bit thin and is not as full as the audio produced by other smartphones.

Samsung has included a threaded messaging app with the Galaxy S III that supports standard SMS and MMS messages. The phone also comes with the standard Google Talk for Android, which offers both video and text chatting, and Samsung's own ChatON messaging service. Fans of other chat services will have to head to the Google Play Store to download the app, as the S III doesn't ship with any other IM systems pre-loaded.

Samsung's email app has been updated for Android 4.0, and I must say I like it a lot. The app is fast and responsive, and it offers features like threaded messages, multiple message management, HTML email support, and pinch zooming. The Galaxy S III also includes Google's excellent Gmail app for Android 4.0.

The Galaxy S III has full access to the Google Play Store and its hundreds of thousands of apps, as well as books, music, and movies. Chances are, if there is an app you are looking for, it can be found there.

Fortunately, Samsung did not burden the Galaxy S III with a plethora of pre-installed apps, but it did include the Flipboard app for Android. The Galaxy S III is the first Android device to ship with the long-awaited app, which originally debuted on the Apple iPad. Flipboard for Android on the Galaxy S III works just as smoothly as the iOS version, and lets users browse their social network feeds in a magazine-style layout.

The Sprint, T-Mobile, and U.S. Cellular versions of the Galaxy S III feature Dropbox installed out of the box, and offer customers 50GB of free Dropbox cloud storage for two years. During the phone's initial set up, users are prompted to sign in to or create a Dropbox account. Once signed in, the free storage is automatically added to the account. Unfortunately, this perk isn't available on the AT&T or Verizon Wireless models.

The Galaxy S III comes with an exceptionally fast and capable web browser. The browser loads pages in what feels like an instant, and it features effortless panning and zooming. The browser scores very well on the SunSpider benchmark, and that translates into a snappy day-to-day experience. 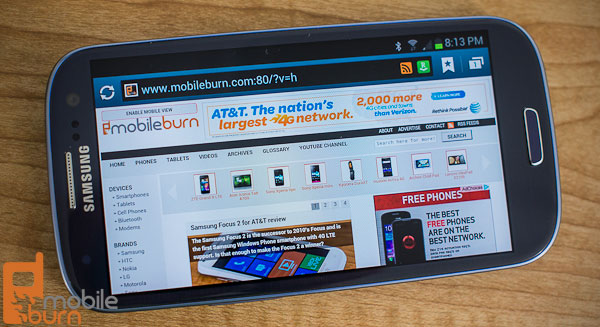 It also includes support for Adobe Flash Player (though the Adobe Flash Player is not pre-loaded, you have to get it from the Google Play Store if you want it), RSS feeds, and a reader mode that strips out images and ads from websites to make web content easier to consume. Since the Galaxy S III runs Android 4.0, you can also opt to use the excellent Google Chrome Beta browser for Android.