well... my computer is on for many hours... non-stop
the HDD i am having problems with is an 80gb BARACUDA SATA HD
It's full of TV shows/cartoons and useless stuff... so thats the reason why i labelled it "TV Shows".

the issue i am facing is:
I start my computer, & whether or not i access the TV Shows HDD, it just disappears from the explorer / my computer drive list after any arbitrary time period.
I then restart my PC and there it is again. But then again disappears after a long time.
When i go to device manager, the hard disk is not to be found even after scanning for "new hardware". It's like the HDD switches off.

My computer is permanently on and the "TV Shows" HDD is seldom used.
No background disk usage occurs on it either.
I have other SATA HDD's too but none behave in the similar manner.
The computer heats up so i have kept the side case open too.

What could be wrong?
I made sure the cables are fixed properly, changed the SATA data cable, also switched it from SATA port 2 on motherboard to SATA port 3, but only this HDD plays hide n' seek.

What can be done in such a case?
I'd appreciate your help.
C

Probably failing since it cold runs OK. Bearings most likely.

its not like it runs OK when cold
when the HDD disappears, i quickly restart and there it is again, and it's pretty hot too
C

-Right click my computer then select manage.
-Double click event viewer then select system.
-In the discription section look for anything that says DISK.
-If you find one and it has a red circle X then double click it to read the info.
M

hmm...
now this seems interesting
many Warning and one Error

one thing is sure that it has to replaced soon... well if something doesn't work well it always means that it has to be replaced
but even so; exactly when does Paging Error & Controller Error occur?

can someone please answer this in an elaborate manner?

This is a sure sign of impending hard drive failure... Back up or move its imporatant data immediately. Replace the drive when you can, or just remove it from your system. You were extremely lucky to receive these error messages and still be able to access the drive. You must have S.M.A.R.T enabled. Don't ignore this drive warning, act now

But check your mbd cables.A new one might be necessary.
Buy the new round type.

zipperman said:
...Buy the new round type.
Click to expand...

yeah! no doubt... well it is inevitable
thank god SMART was enabled or else i'd be... well annoyed. big deal.
time to move on.

Don't worry about round IDE cables, just use what you are used to. Round, flat no electrical difference
M

hmm... i googled it
the only prominent advantage being that they don't restrict air-flow inside the cabinet like the flat ones do.
well... worth noting.
but... just, not for my situation cauz i don't think any one will go connecting a SATA HDD using an IDE cable
It's a round IDE cable... there ain't no round SATA cable cauz it's not required

maybe i'd buy one of these round IDE cables for my DVD-RAM and my other IDE HDD... maybe
it'll make my cabinet neater
other than this it seems this topic is closed

lol!
yeah... actually even before i started this thread
but who knows... some wierd solutions lie out here

but exactly what did u mean by

is it a wheel or something?
C

All things that spin have a bearing - watches use jewels, engines use rollers and balls, etc. Your HD uses bearings.

Your present flat cable may be damaged.Buy either (their cheap)
Upgrade to the roomier neater round colored style.
You should find a picture at places like Best Buy or a local store.
I can't snapshot inside my case.

Do you mean this thing? (Sata data cable) 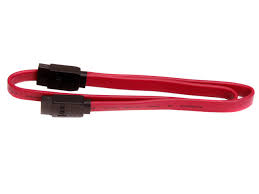 Only if you have a SATA Motherboard and HD.
The IDE has 2 connections Master and slave and looks much the same,only it's round.