Neowin: Windows 8 UX designer says Metro is "the antithesis of a power user"

Windows 8 UX designer talks about the decisions behind the Metro interface, as well as why they were made, and why its a necessary evil that power users must endure.

Yet another way to say "no, we don't bring Start Menu back, now wank off people"?
Reactions: psycros
G

Easier to use for grandmas than only want to open IE, agree.

As I've been saying over and over again. But not quite so eloquently.

Metro is ****. Can only polish a turd so much, in the end its still a turd.
Reactions: psycros

I have been happily using windows 8 on my desktops and laptops for the past year and half (I like change in OS's). But I realized that I was always using windows 8 like windows 7 I had a very bear start menu with all the programs I needed pin to the task bar, and very rarely ever used apps. if I needed a different program then what I had pinned I would just go to the start page and type it in. I decided to make the move over to mobile computing recently instead of my traditional desktop laptop configuration. I find myself using my Surface RT now as my desktop (have a powered hub with a hard drive and all my USB accessories attached, and the VGA adapter to my monitor). In this configuration I find myself using more apps now and having to use the snap feature to use the desktop alongside my apps. I am growing to love windows 8.1 more in this configuration. I found lots of nice apps to replace my old programs on my old systems and I am enjoying the speed of the tablet. For when I need my old programs I picked up a Venue 8 pro for cheap and have that setup as well, even grabbed a nice 10" Asus memo pad on clearance to give me a taste of where android is. I know that for power users the Modern UI needs a lot of work but its in its infancy. A lot of features we enjoy in our older Windows interfaces weren't there in there beginnings. Multi-Monitor support using the Modern UI is a huge place that needs to be improved, the multi-tasking between the apps and desktop acts just like the task bar has for years. I see where Microsoft is trying to go with this system, and with the hardware for 90% of the users going mobile its makes sense that the OS is more mobile centric. But for the 10% out there, the power users, Microsoft hasn't abandoned you, windows 7 is still available, and has continued to be available from OEM's on systems that power users would normally buy (obviously consumer level models are coming with windows 8). Windows 7 will stay available to you guys as Microsoft continues evolving Modern UI into a solution that fits your needs better. But the article is correct for the power users out there running 2-6 monitors and have 5 major things going on at once the Windows 8/8.1 family and the Modern UI were not designed for you, at least not yet.

8 is OK but I use classic start menu. it plays GTA SA. It is on my secondary computer and was a free upgrade

So one of the (presumably) MAIN DESIGNERS for Metro freely admits that it (a) was intended to divide the user base, (b) hurts productivity and (c) was NOT meant to be accessible, iintuitive or even likable...but that their *HOPING* that five years down the line maybe we'll all have suffered brain injuries and started to love it. Microsoft is finished.

Metro is change in its infancy, of which I want no part of in its current state.
G

Ok, so I get it...make the OS more simple for most users...but what about the power users? You can't just shut them away! A huge part of the Windows market is enterprise! I was like WTF when I saw those retards put metro on the server OS, and to this day I RARELY see it used at all. I work at a company with 1500+ servers and I can count the number of Server 2012 servers on my fingers. Admins HATE it. I mean really how hard would it be to make a true Professional and Server OS for Enterprise, while keeping the new OS too for casual users? If M$ keeps making decisions like this...their presence in the Enterprise is going to continue to go to hell.

Kibaruk said:
Well I'm f****d, how can I say anything past this

Very brave of you to stick your head above the parapet.

I decided to read the extended article and I was surprised that W8 is designed to run more than one GUI. In retrospect one can see that Metro and Desktop are effectively different GUIs. It does look as if MS have done a sensible thing and split the underlying OS and GUI as with Linux etc. In theory MS could offer a wide range of GUIs for specific users or environments.

In theory would it also be possible for 3rd party vendors to produce a custom GUI. Maybe a GUI that apes XP?

Railman said:
Very brave of you to stick your head above the parapet.
Click to expand...

Railman said:
In theory MS could offer a wide range of GUIs for specific users or environments.
Click to expand...

Which is why I don't understand why the Start Menu was removed. Sure I could learn to live without it, but why am I and so many others being denied the continued use of the Start Menu. Microsoft is a business that should cater to its customers.

I still say Microsoft was butt hurt over not being able to gain ground in the mobile space, so they tried forcing their desktop users into this space. Whether it was true or not, was still a bad move for Microsoft to force feed such a change.

What I can think of, is that W8 was meant for "content users" as in "touch and customize as little as possible" so that non-tech-savy users would get no frustrations using Windows 8 out of the box, for us the more techies would have a fair amount of practice to tinker around a bit to customize it to our liking.

What would've been great is an option for those who don't like Metro start menu to get the old one back... though as said before as long as you customize it to your liking works pretty much like clasic start menu, just bigger icons

This doesn't look to bad. A tad too much blue for may taste, but I'm sure that can be changed.

I might be willing to use Windows 8.1 (Update 1) with this Aero Glass and maybe Start8. Still abit disappointing to pay for Start8 when it represents what was taken out of Windows 7. There are so many other built-in applications, I'd much rather see removed and offered as a separate download. In fact I wouldn't be so disappointed in Windows 8 if Windows Aero and the Start Menu had of been offered as a separate download. Just shows how ridiculous Microsoft Execs are. They don't have to bring anything back to Windows 8, all they need to do is offer, what was removed as an alternative download.

Having read through the article again I now see why MS cocked up on W8. Splitting users into two categories Content Creators and Content Consumers seems a pretty academic exercise. To then go on and design a GUI based on only one of those categories seems to be the height of folly. I suspect the reason this happened is because of an initiative from the top and the folks at the bottom being afraid to say the Emperor has no clothes.

When your largest user base is Enterprise the split seems even more daft. It does beg the question if the management have enough commercial experience.

Neowin said:
Windows 8 UX designer talks about the decisions behind the Metro interface, as well as why they were made, and why its a necessary evil that power users must endure.
Click to expand...

So then, they got somebody else to try their hand at the whole mass, "HIP-No-cess", thing?

I guess Ballmer couldn't put 'en under, since the audience was too busy being blinded by the glare off his head, to pay any attention to the swinging Rolex.

And Stevie was heard to say, "when I snap my fingers, you will awake refreshed, with an overwhelming desire to purchase several copies of Windows 8". 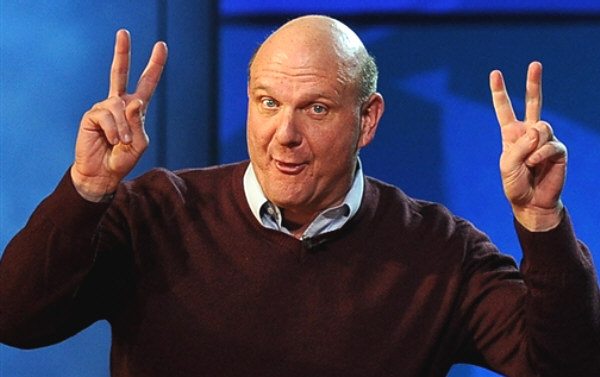 Then there's this, with Steve Sinolfsky: I think the pitch here was, "hey little girl, if you get in my van, I'll give you this shiny new pink Surface tablet".......

Mr. Sinofsky has since left M$, or perhaps he was merely transferred to another parish...
Last edited: Feb 22, 2014
You must log in or register to reply here.