AT&T Wireless is about to make some slight modifications to its data plans which may benefit some customers, but hurt others. The good news? Starting January 22, AT&T will be replacing its 200MB and 2GB data plans with 300MB and 3GB, respectively. The bad news? AT&T will be charging an additional $5 per month for each plan. The increase for lower and middle tier pricing means 300MB plans will be $20/mo while 3GB plans will be $30/mo.

AT&T shrewdly spun the price hike as a good thing, giving customers more data up-front at a "great value". The company pointed out that the newly adjusted tiers yield a slightly higher ratio of megabytes to dollars than the old tiers, increasing the overall value of their data plans. AT&T identified last year's increase in data usage as the reason for the change-up.The company's recent endeavor to deploy LTE may have attributed to the price hike as well.

Analytics firm, Validas, refuted the carrier's claim of providing a "great value" though, by showing in most real-world scenarios, people will end up paying more for bandwidth they do not need. In a nutshell, the numbers may look better on paper but have little merit in the real world. The firm questioned AT&T's motives, noting such price hikes didn't occurr the last time AT&T saw increased data usage.

We took a look at their $25/2GB plan, now boosted to a $30/3GB plan. While the math indicates that the new version of the plan is a better value ($10/GB down from $12.50/GB), our data suggests that average AT&T Smartphone data consumption: 1) is far lower than either the new 30GB or the old 20GB tiered limits (calling into question whether the new version of the plan effectively offers better “real world” value for the average user than the old plan), and 2) has not recently peaked in such a way that would necessitate the extra gigabyte for the typical user.

Under the newly adjusted tiers, here is an overview of AT&T's data plans: 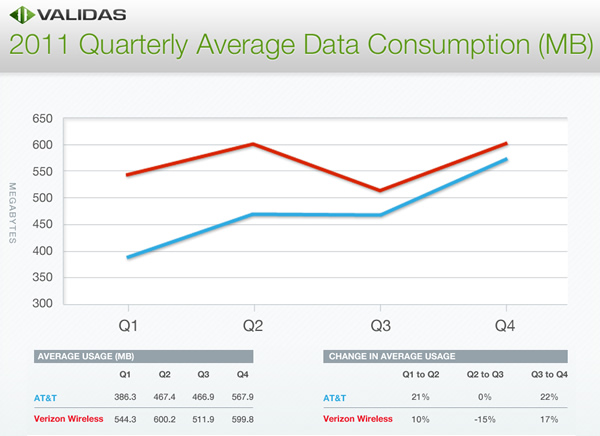