A leaked roadmap picked up by VR-Zone suggests Intel's Broadwell won't be shipping any time soon. The desktop timeline, which just barely slips into the beginning of 2015, doesn't even mention Broadwell. Additionally, Broadwell's absence on a previously leaked roadmap possibly extends this absence even further -- well into the first-half of 2015. So, what happened to Broadwell? 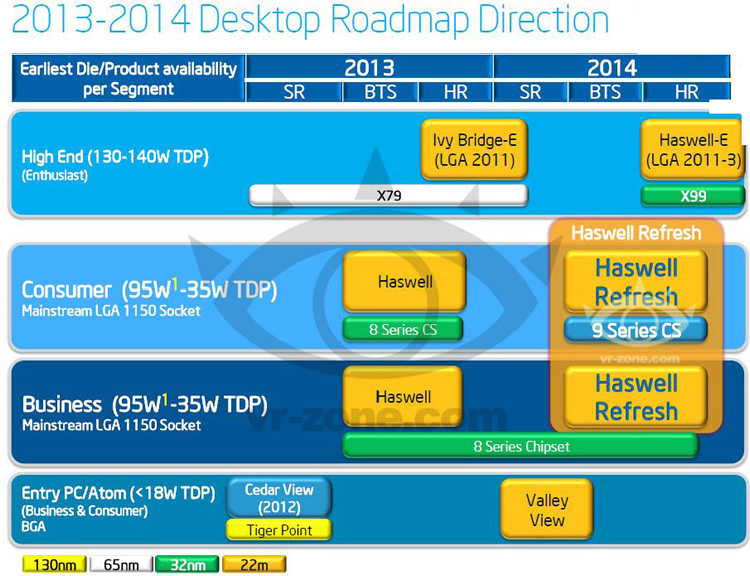 We're currently in the midst of Intel's Haswell awakening as manufacturers announced various Haswell-equipped PCs and laptops. Although fourth-gen CPUs based on Haswell's 22nm architecture don't seem to offer much of a CPU performance bump, Intel has made definite gains in integrated graphics performance and overall power consumption.

Broadwell is expected to be a "tick" in Intel's tick-tock release cycle, which means we'll likely see a die-shrink (14nm) and little else. As such, some suppose the "Haswell Refresh" (which is due later in 2014) may actually be Broadwell -- this may make some sense given that Skylake is purportedly due in early 2015. Skylake is expected to be the "tock" to Broadwell's "tick". Lending some additional credence to this thinking is Intel's 9-series chipset. The new platform was originally planned to accompany the launch of Broadwell but it now appears to be aligned with the Haswell refresh instead. So, Haswell refresh = Broadwell? Maybe...

VR-Zone's "Computex sources" claim though that Broadwell won't appear on desktop systems until the second half of 2015. If that's true, Haswell should reign supreme in the mainstream space for quite some time. Broadwell could always appear beforehand though, in some non-desktop form. A rumor indicating Broadwell will be soldered onto motherboards carries with some implication of its use inside portable and special form factor computers, if not just for low-end PCs as rumored.

Also, Ivy Bridge will be gaining 130W-140W LGA2011 "E" variant later this year, intended to cater to the high-performance market. Meanwhile, a Haswell-E part isn't due until the latter half of 2014 perhaps encouraging enthusiasts to hold onto their third-gen Intel CPUs for an uncharacteristically long period time.