Late last year, trailers for the motion picture ‘Straight Outta Compton’ started to appear on Facebook. The movie was a big hit, something that Universal digital marketing executive Doug Neil attributes to “ethnic affiliation” marketing, according to Business Insider. What this means is that there were different trailers made for the movie, which version you saw likely depended on your race.

Facebook is careful with its wording when describing this feature to advertisers. The site can’t target ads based on race alone, only on information it infers from users’ profiles and interests. If, for example, someone is a member of an African American Chamber of Commerce group, Facebook will assign that person to an ‘African-American affinity group.’

The diversity of the US is more than an ethnic biodiversity. These groups of people have a rich diversity of culture, which can include many things, such as beliefs, traditions, music, aesthetics, or language. The people in the US who have demonstrated affinity for the cultures of these groups make up the US Multicultural Affinity audiences.

The word “affinity” can generally be defined as a relationship like a marriage, as a natural liking, and as a similarity of characteristics. We are using the term “Multicultural Affinity” to describe the quality of people who are interested in and likely to respond well to multicultural content. What we are referring to in these affinity groups is not their genetic makeup, but their affinity to the cultures they are interested in.

The Facebook multicultural targeting solution is based on affinity, not ethnicity. This provides advertisers with an opportunity to serve highly relevant ad content to affinity-based audiences.

As pointed out by Ars Technica, however, when Facebook describes its four ‘affinity audiences’ - non-multicultural (white users, presumably), African American, Asian American, and Hispanic – it shows images of people from the target race. 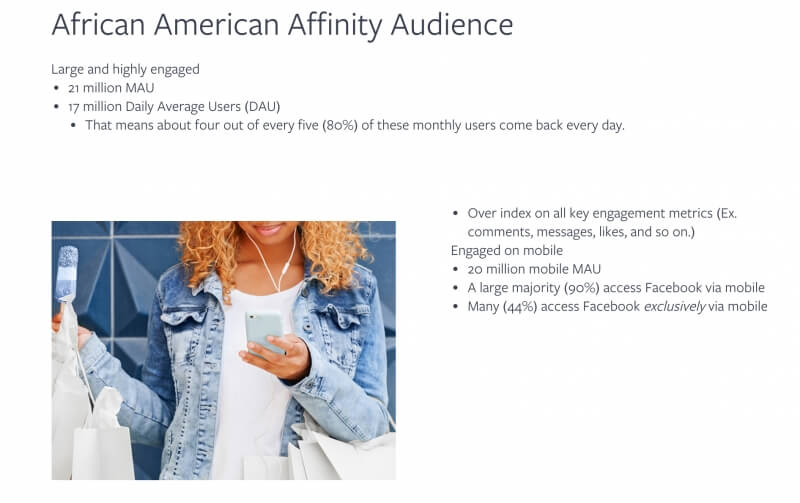 In the case of Straight Outta Compton, Universal believed that most white Americans didn’t know anything about rap group N.W.A, the band the biopic was based on. The studio also assumed most white citizens would only know Ice Cube as an actor and Dr. Dre as the man behind Beats headphones - unaware that they are also musicians.

The trailer marketed to the “general population” (non-African American, non-Hispanic) on Facebook had no mention of N.W.A., but sold the movie as a story of the rise of Ice Cube and Dr. Dre. The full version is below.

The trailer targeted at African Americans (below) put much more focus on N.W.A. itself, while the one made for the Hispanic market was shorter and included flashing quotes in Spanish.

While the movie did gross over $200 million at the box office, it’s hard to image that this sort of advertising played a huge role in its success. But in the future, you can expect more companies to offer ads based on your race – or at least what Facebook believes is your race.