Apple is reportedly telling staff to get their booster shots

Dunkerton said:
The currently available "vaccines" are not immunizations, and therefore should never be mandated. We are still learning about the negative effects from mRNA vaccines vs natural immunity - and it's not looking good. Some European countries are reporting negative efficacy (more likely to experience severe illness) with shots/boosters than without. It's all a huge, obvious scam at this point.
Click to expand... 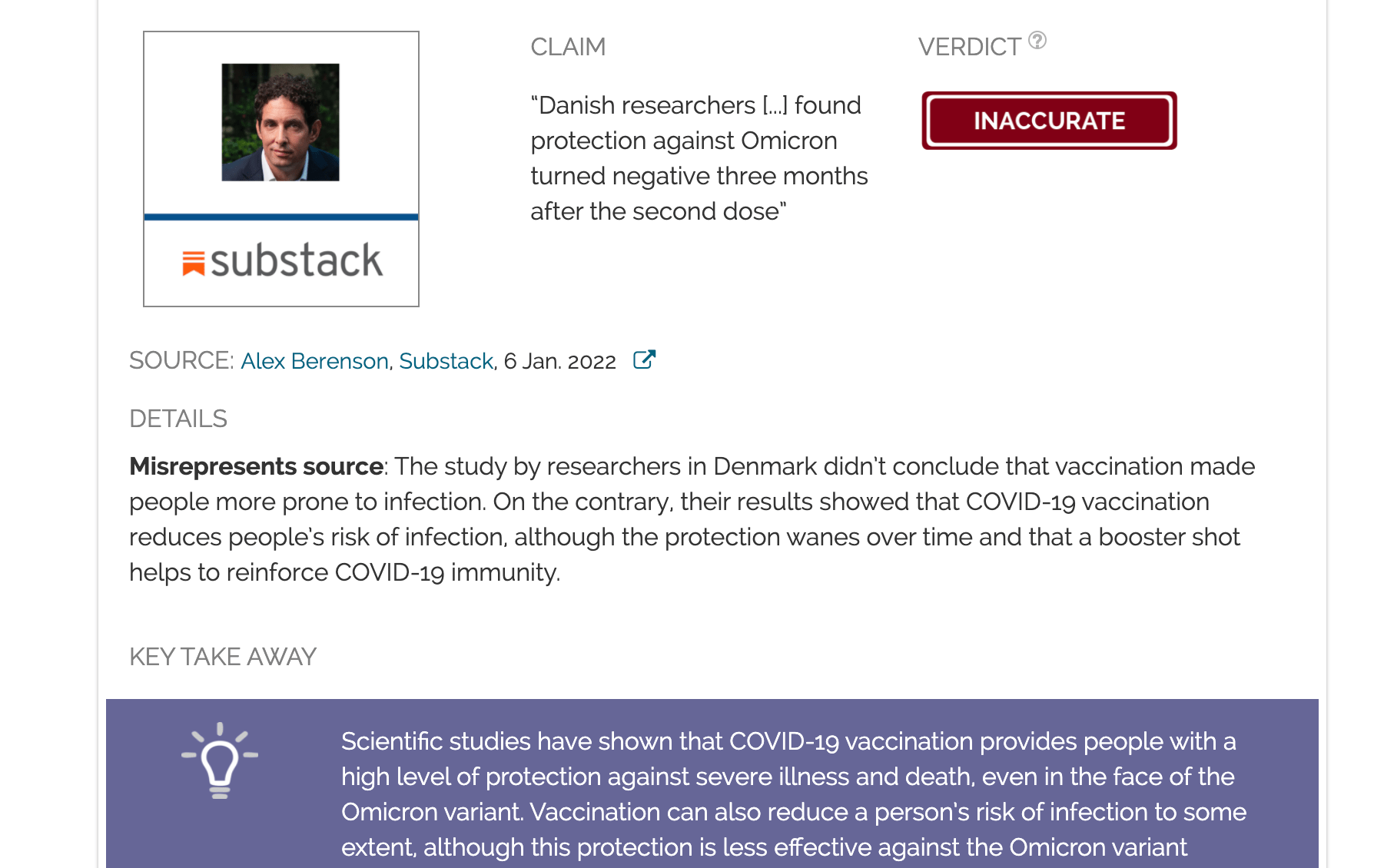 No, a study from Denmark didn’t find that COVID-19 vaccines make people more prone to infection; biases in the study likely led to underestimated vaccine effectiveness

Scientific studies have shown that COVID-19 vaccination provides people with a high level of protection against severe illness and death, even in the face of the Omicron variant. Vaccination can also reduce a person’s risk of infection to some extent, although this protection is less effective...

No, a study from Denmark didn’t find that COVID-19 vaccines make people more prone to infection; biases in the study likely led to underestimated vaccine effectiveness

Scientific studies have shown that COVID-19 vaccination provides people with a high level of protection against severe illness and death, even in the face of the Omicron variant. Vaccination can also reduce a person’s risk of infection to some extent, although this protection is less effective...

Nice MSM sponsored "fact check," but I was referring to the raw data out of Canada, and I believe the UK has similar trends. Can you imagine the hysteria if the MSM actually admitted to this? You have to analyze the raw data yourself if you want to get any answers nowadays. And have a general understanding of statistics, age stratification, blah blah blah. Do not copy/paste a "fact check" and call it even. Do the work yourself. Also - I'm just not gonna get the vax is all. HAHAHAH
S

wiyosaya said:
They all also claim...
Click to expand...

And this is exactly why meaningful debate is impossible. Can we stop assuming that "they all" think the same thing (as if there is a "they" at all).
Reactions: wiyosaya

wiyosaya said:
So what? It was unknown how long immmunity would last from the day that the decision was made to develop the vaccine - because that is the way that vaccines, more appropriately put, the human immune system works in many cases. There is more than one vaccine that needs boosters - take tetanus, for instance.
Click to expand...

You still do not understand the difference between sterilizing immunity (immunizations) and the current covid vaccines. Please do us all a favor and educate yourself before making any more posts.
T

Get a booster for a disease that, according to the BMJ, the netherlands, and data from germany and israel, appears to have a lower death rate then the seasonal flu for anyone with the original two shots.

This kind of thing is why nobody trusts the ones in power when it coms to this disease. This makes no sense, if apple was REALLY worried about the health of their employees they would be making every effort to allow people to work from home.

Uncle Al said:
1. There have been very few deaths among those that have all three shots.
2. The US Supreme Court recently made OSHA ineffective in executing mandatory steps to make
the work place safe from COVID, among other things.
3. As has been proven in the past with Polio and several other diseases, vaccinations work.
Perhaps not for everyone but for a wide majority.
4. The rush to bring forward vaccinations and treatments has eliminated the normal time period
for testing and refinement to make vaccine's safe for "everyone".

Mandatory inoculations have nothing to do with politics, individual rights, bla, bla, bla. It has everything to do with survivability of the species but as we are seeing every day, the high degree of ignorance due to lack of education and gullibility of the population, far too many people simply are not using everyday common sense.

It now appears to be a race to see what can kill off the population faster; Covid-like disease or environmental collapse. Fortunately, mother earth will survive as she has done time and time again ... with or without the current species commonly refereed to as mankind.
Click to expand...

1. There have also been very few death among those who had only the original two shots, and with omicron even the unvaccinated death rate is plummeting.
2. Thank god. That would have been a massive overstep of federal power
3. Yes, previous vaccines were effective. The issue here is the rising number of hospitalizations in vaccinated individuals with covid, suggesting this vaccine isnt stopping the disease or the disease is mutating to avoid vaccines. It's already established that Omicron is very mild and that natural immunity is much stronger then vax immunity for covid, due to how RNA vaccines work. This makes the constant push for the booster very suspect.
4. The rush was amajor issue when trump was in office, then once he was out suddenly it was the safest, most effective vaccine ever. This has caused a major loss of trust from the general populace. Places like europe still have a reminder of what can go wrong with rushed vaccines (the swine flu vaccine in europe caused irreversable narcolepsy).

The inability to discuss these facts has turned a lot of people against this vaccine and any disease management efforts. Every day common sense is "when someones keeps changing the story, dont trust them" and the government has been changing their tune on Corona for two years now, constantly changing and updating their mandates with no regard for case numbers, death rates, or impact on the lives of people. It's become a blatant polticized power grab, and a LOT of people are questioning how much of what is being told is the actual truth. When they get yelled at for questioning the narrative, this only reinforces that they were right to worry.

Dunkerton said:
You still do not understand the difference between sterilizing immunity (immunizations) and the current covid vaccines. Please do us all a favor and educate yourself before making any more posts.
Click to expand...

The current government cant make up their mind. They were effective at stopping transmission, then they were not, then they prevented serious illness now they only sometimes do other times they dont and they prevent hospitalization oh wait we never said that it just helps you not die ece, ece.

It is impossible to educate oneself on a subject when those promoting said subject keep changing what is established like some sort of cult leader.
Reactions: Dunkerton
You must log in or register to reply here.