The bit that is most disturbing is Intel buying off the TSMC 3nm capacity...

The hybrid P-core/E-core design has implications.

For an Intel 8E/8P to match an AMD 16, the faster P cores must compensate for the slower E cores. E cores are supposed to be about 0.6 of a P core.

If Intel really has these super fast P cores, why add E cores? It unnecessarily drives up the price and makes the chip far more complicated.

But: Here the GeekBench vs real life results may be different since Alder Lake afaik does not have AVX-512.

We‘ll see when the first reviews come out.
Click to expand...

Intel does have a history of fudging benchmarks to make their CPUs look better before launch (e.g. the benchmark that they were doing using sub-ambient cooling a few years back). We will have to wait and see how things turn out when third parties have the processors in hand to benchmark.

That said, it will be nice to have a competitive CPU market where neither manufacturer is releasing processors that imitate the sun by pulling hundreds of Watts of power. If Intel and AMD are competitive with each other then it is the consumers who are the ones who win.
W

Competition is good. If this is true, then hopefully it will get AMD to work harder.

Having said that, there are still a lot of unknowns in this benchmark result. I rather wait for independent and official results.
Reactions: b3rdm4n and Sausagemeat

While I am elated that AMD is currently on top, it's fantastic news if Intel are still very much right in the fight. And I'd expect them on top again within the coming few years, even if only short lived, where they tit-for-tat each other and are extremely competitive.

Any mindset where RIP Intel and Intel should stay [well] behind AMD (and vica versa) is the thoughts of a fool. The recent few years of AMD doing well and Intel's blunders have allowed the playing feield to narrow considerably, which we all needed. AMD was behind for too long, allowing Intel to get away with quad cores for... geez how many generations?

Same goes for Nvidia, I'd love to see AMD comprehensively beat their entire stack, and no doubt a lot of people I could name from here and across the community would bloody well dance in the street at that notion, but it's good for everyone where they're all at their most competitive.
Reactions: Wrinkle
K

Having a Ryzen 3600 now, I actually want Intel to be at least equal or a little better than Zen3, because AMD needs to be pushed harder to not slack on the winning laurels.

If this comes true then Zen3 prices will drop (so I can upgrade cheaper) and then a few months later Zen3+ will come to bring back order. I also might consider upgrading to that directly. AM4 turns out to be the best upgrading platform in many years.

Also a 5% lead for Alder Lake will not be "demolishing" Zen3. And until I see trusted reviews from HU and GN, I'm not gonna believe a synthetic mediocre benchmark about 10%-20% more performance over Zen3. Even if that turns out to be true, it needs to be confirmed in gaming by HU and GN.

Anything else is speculation, rumors and influencers+shills doing their "thing".

Yeah, I'm sure they are already cringing heavily. What more, I can almost picture Ms Su already packing her personal belongings into a large brown cardboard box while evacuating her corner office, as the AMD HQ is being reassigned to be the next distribution centre for Wallmart...after such a powerful move from Intel, I'm positive there is absolutely nothing else AMD could do...

Lionvibez said:
lol so intel's yet to be release cpu is just barely faster than a year old AMD chip they certainly are dead.

AMD's Zen 3 refresh should have no issues with this chip.

This is true but don't tell this to the team blue fan boys. Out of everyone reporting this today techspot has the most normal title. Other places you have fan boy flaming titles like

If these results are accurate its just abit faster than a 5950X there is no dominating,smashing or destruction here, just fanning the flames with these titles to have fan boys fighting.

Also the posted numbers for the 5950x are low. 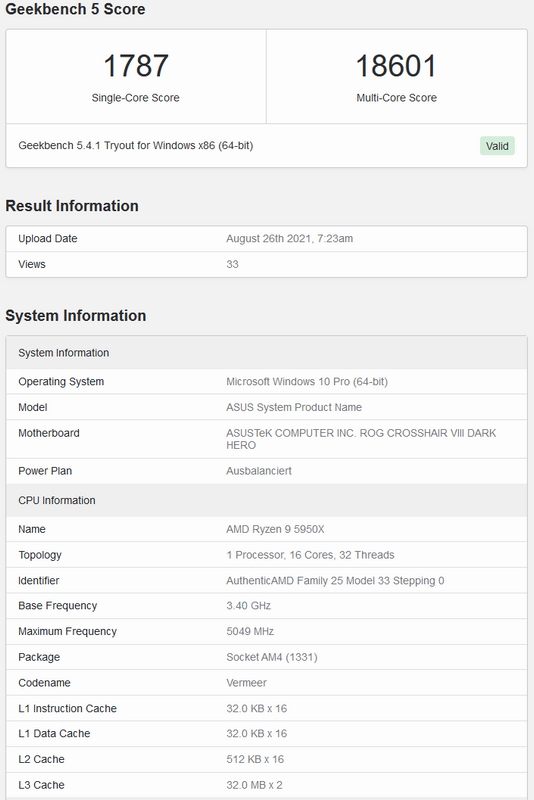 To be honest, same thing was done by AMD fanbois in the past 3 years. AMD CPU is ~5% faster than intel's you see titles like those you listed just replace intel with amd.

Let's not pretend that one cult is better than the other.
Reactions: b3rdm4n and Wrinkle

Aryassen said:
Yeah, I'm sure they are already cringing heavily. What more, I can almost picture Ms Su already packing her personal belongings into a large brown cardboard box while evacuating her corner office, as the AMD HQ is being reassigned to be the next distribution centre for Wallmart...after such a powerful move from Intel, I'm positive there is absolutely nothing else AMD could do...

No wonder that RAM manufacturers rejected the mor...onic naming convention and switched to DDRx <freq> system, which is more logical and user-friendly.

The main reason for AMD gaining a significant percent of market is probably because users can't remember the names of Intel CPUs.
J

In my benchmark suite the 5950x wins by a landslide! Of course that's because I have an X570 motherboard. Lol. I think this is actually the first Intel launch that I am looking forward to. It will be interesting to see how well they pull off the Big.little architecture with scheduling, and how power consumption is.
N

Why? Intel needs to beat amd's new cpu's not the old ones. Intel was always going to beat the current lineup otherwise there is no point in even making any cpu's. The new tech always beats the old tech. New tech vs the competitions new tech is where the real battle will be.
Reactions: Lionvibez
L

When Zen3D launches, AMD is gonna get a boost in gaming performance of up to 20% on this same old architecture. Then, Zen 4.

AMD is in a great position. Relax.
B

Wait a second, I thought Intel swore off benchmarks because they didn't represent real world performance and maybe because they were losing...LOL
Reactions: Lionvibez
You must log in or register to reply here.