The big picture: Tablet sales rocketed in Q1 2021, with Apple’s iPad holding onto the top-spot as the most popular tablet worldwide. Google’s Chromebooks also saw impressive growth thanks to increased adoption in many educational settings – a move that could eat into tablet sales in years to come. Anuroopa Nataraj, research analyst with IDC, said: “While vaccine rollouts and businesses returning to offices may slow down the work-from-home trend, we are still far from returning to ‘normal’ working conditions and hence the demand for tablets, especially detachables, is expected to continue for a while.”

Also read: Which iPad Model Should You Get?

However, IDC points out that Chromebook sales also rocketed in the same quarter, growing by a staggering 357.1 percent. The research firm highlights that this is likely due to the Chromebook’s increased use in educational settings, like schools and colleges – a market that tablet computers had previously been closing in on.

Apple recently reported record revenue of $89.6 billion, an increase of 54 percent compared to the same period a year earlier. The iPhone alone accounted for $47.9 billion, despite seemingly poor sales of its iPhone 12 mini model.

At the time, Apple CEO Tim Cook said: “This quarter reflects both the enduring ways our products have helped our users meet this moment in their own lives, as well as the optimism consumers seem to feel about better days ahead for all of us.”

I really don't think Steve Jobs "wanted" iPad to have a stylus and keyboard. I'm certain that he wanted iPad to be a tablet, rather than slowly becoming a "laptop".

But I must say, iPad, through multiple iterations, has been the absolute best, most refined and most well rounded "tablet" on the market since day one.

The competition added "more" cameras, "more battery", more this and that... but ultimately, Apple's slow and steady won the race. 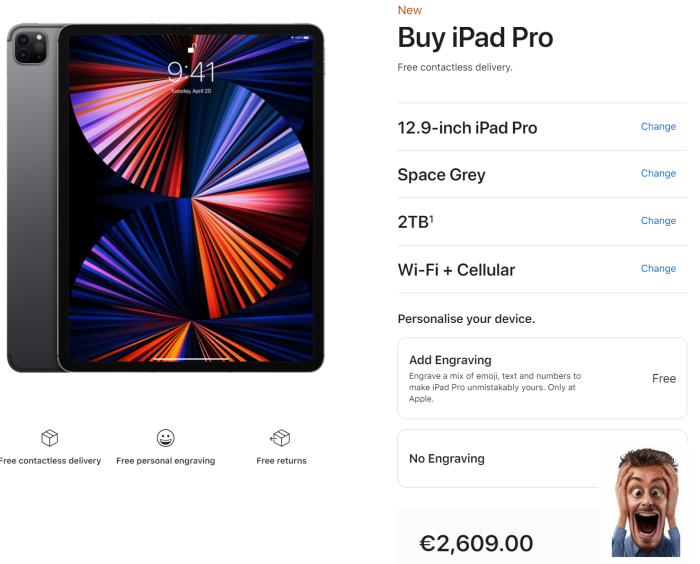 Just so, it is possible today to get a whole PC, with Ryzen 5600x and 2TB M.2 SSD for under €1,300, which will offer perhaps 10 times better value for your money.
Last edited: May 1, 2021
Reactions: adamada72, himindedlolife and ilovelinux
I

Apple customers are slow in the head. Like Apple they only know to race with themselves.
Reactions: adamada72, himindedlolife and VitalyT
K

Selling the most tablets is like winning the special Olympics.
Reactions: adamada72 and VitalyT

Eric Cartman would have loved it. He was a fiend for iPads and Special Olympics.

That's why we have such heroes as Heather Swanson...

I'll leave you with this.

6 of the largest enterprise Mac deployments

Macs continue to spread in the enterprise due in large part to employee demand. Here are the companies deploying the largest numbers of these devices.

Become one of these and we will take your comments seriously.

ilovelinux said:
Apple customers are slow in the head. Like Apple they only know to race with themselves.
Click to expand...

The free market is NEVER Wrong.

It's $1150USD here in the US. Why's it so expensive in Europe?
You must log in or register to reply here.