The number of Apple enthusiasts continues to creep upward as Apple bumps past the five percent mark to 5.3 percent, representing a major psychological milestone for the Cupertino-based company. This is up from 4.4% about a year ago.

While Apple's success still is not quite enough to make them number one in computers, Apple's growth in the personal computer market has handily bested all other PC manufacturers. The company's growth in computer sales accounted for 20 percent of all personal computer shipments, the result of a generous 25.6 percent bump from last year's performance. Compared against the industry average of 4.0 percent, it is clear Apple still has plenty of momentum.

The enterprising company also continues to make headway into the business sector, outpacing the rest of the market by nine to one. To put it more illustratively, that is 43.8 percent versus the industry average of 4.8 percent. There are expectations that Apple will continue to flourish in business markets because Apple's new CEO, Tim Cook, has publicly stated he has more interest in working with enterprise customers than the company has previously shown. China is now Apple's second largest market with a record sales of $4.5 billion during Q3 of 2011. This is also echoed in other world markets, where the company has gained 19.5 percent growth in Europe despite an overall, 10.5 percent industry decline last quarter. 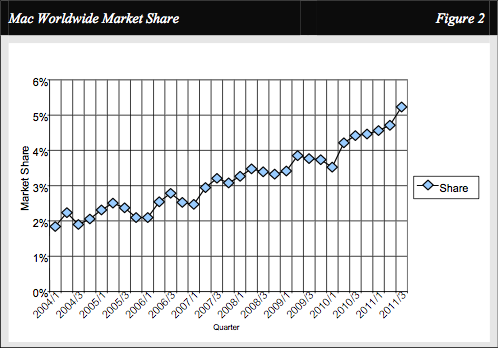 These numbers are not without controversy though. The firm who performed the analysis, Needham & Company, chose to lump together tablets with personal computer sales. This is not unlike other recent analyses performed by a plethora of companies, but this does give Apple an obvious edge being that they are still the #1 tablet manufacturer in the world.

So now, the question is, are tablets really "personal computers"? How should a PC be defined these days?