According to data furnished by MoPub and mulled over by TechCrunch, the number of iPhone users running iOS 6 jumped by 29 percent between December 11 and December 15. MoPub tracks over one billion ad impressions daily across many carriers and apps.

So, why was there a seemingly inexplicable boost in iOS 6 adoption over the weekend? Some believe iOS 6's accelerated uptake is the direct result of Google Maps, an app which made a December 12 debut on Apple's App Store. 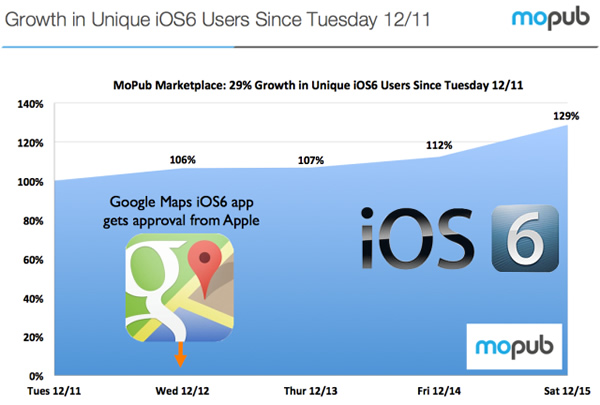 Perhaps more incidental than coincidental, the day Google Maps was released, MoPub shows a six percent bump for users with iOS 6 devices. By Friday, that was gain was doubled. On Saturday, iOS 6 users had jumped a remarkable 17 percent.

To the chagrin of some iPhone owners, Apple swapped its well-liked Maps app out for its own, in-house creation in iOS 6. Apple's own mapping software was far from perfect though, eliciting a great deal of criticism for its quirky behavior, occasional inaccuracy and the absence of a Street View-like feature. Customer complaints even prompted Apple CEO Tim Cook to personally apologize, promising that their app would improve with future updates.

MoPub's data may support a narrative where some iOS 5 users refused to upgrade to iOS 6, afraid to lose their native, Google-powered Maps app. Of course, there may very well be another explanation, but after 10 million downloads in just two days, the incredible public interest in Google Maps's iOS app makes it a potentially powerful motivator for anyone waiting to upgrade.