Not to be outdone by its arch-nemesis AMD, Nvidia has launched a fresh volley of mobile Geforce GTX 700M GPUs, namely the GTX 760M, 765M, 770M and 780M. Nvidia claims its GTX 780M is the fastest mobile GPU in existence, even besting AMD's recently released Radeon HD 8970M -- a chip, if only briefly, stood atop the heap of mobile GPUs fit for gaming. 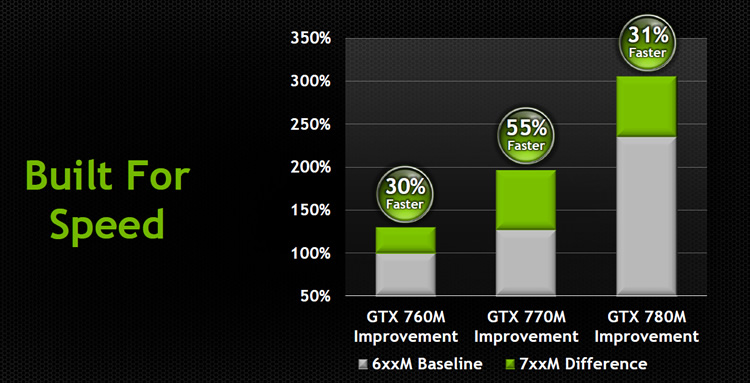 Overall, the new offerings appear to be between 30-55 percent faster than their previous generation counterparts (660M, 670M and 680M). Nvidia is claiming that notebooks equipped with 700M-series GPUs can be up to 40 percent lighter (and thinner) than those equipped with 600M-series hardware. Presumably, this is due to lower power consumption and smarter efficiency (e.g. Optimus) which lead to better thermals; however, exact figures were absent from the announcement. 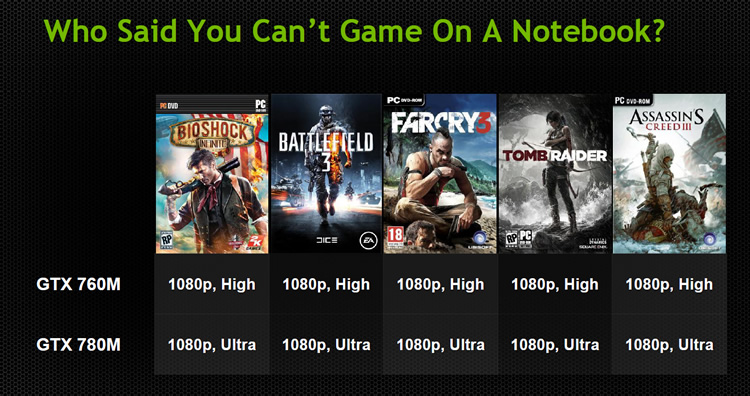 Nvidia claims the 780M can run Bioshock Infinite, Battlefield 3, Farcry 3, Tomb Radier (2013) and Assassin's Creed III at 1080p with settings cranked up to "Ultra". Can it run Crysis though? Looks like we'll have to wait for a definitive answer on that very important question.