Consumer electronics-maker and PC-dabbler Vizio has launched its latest computing device: an 11.6-inch Windows 8 PC-based tablet for $600 (MT11X-A1). The slate features a generously-sized 1080p display, 64GB SSD, 2GB and an AMD Z-60 APU. Pair that up with a 2MP front-facing camera, stereo speakers and Micro HDMI/USB ports and you have yourself a tablet-sized PC, at least in most senses of the word. 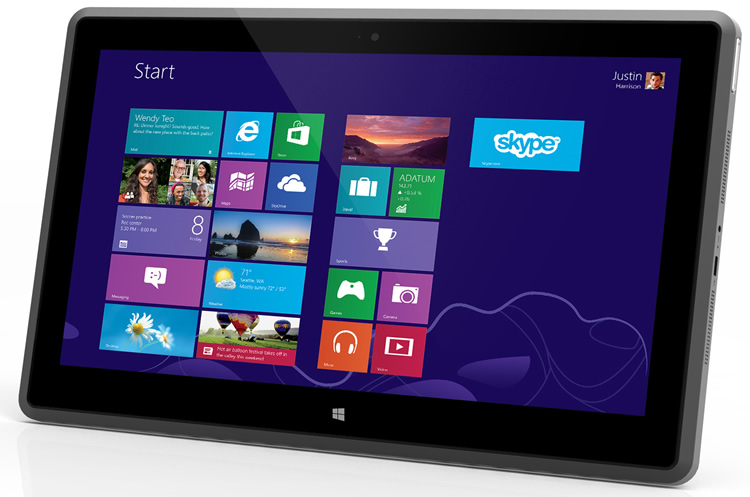 Although the AMD Z-60 its packing is a last-gen part (i.e. Hondo, not Temash), its Radeon HD 6250 should deliver more graphics gusto than most tablets. In terms of computational power though, it should be comparable to Intel's Clover Field -- an okay but not stellar performer that is slated to be quickly overshadowed by upcoming fanless Intel Haswell and AMD Temash options.

Weighing in at 1.8 pounds, the MT11X-A1 is a substantial slab of tablet. By comparison, the 10.1-inch Nexus 10 weighs in at just 1.33 pounds and the third-gen iPad tips the scale at 1.44 pounds. With beefier AMD-based internals though and a 1.5-inch larger screen, the slight bump in heft seems well-justified. The chassis looks sleek (0.4-inch thin) and features an aluminum design with a soft-touch back.

Presumably in an effort to keep the tablet thin and as light as possible, Vizio has packed an unimpressive (but not bad) 33.3 Wh internal battery. A bigger battery though would have been nice to offset the inclusion that Hondo-based APU. As a result, Vizio is advertising "up to 5 hours" of battery life.