Since its birth in the labs of ARPANET half a century back, Internet has risen to create a truly global communication system connecting people across the world. The last two decades has seen users rising from forty million to around 3 billion, with one billion added in the last four-five years itself. This exponential growth is fueled primarily by three factors: a robust and resilient global network, growth of cheaper and powerful computing driven by the Kurzweil curve and an ecosystem of relevant services created by new companies powered by network effects.

The Elephant in the Room

Over 4 billion people still remain unconnected to the Internet. Users today are predominantly urban since vast majority of investments by telecom industry went into solving the problem of capacity and complexity while not investing enough on last mile access. Case in point, the United States. Over 10 million have no access and 17% of its population (incl. over half of rural Americans) lack quality broadband access. The problem is not merely economic (lower rural revenue, higher capex) as often argued, but also because of technological limitations. In a developing country such as India, this problem is compounded by lack of reliable support infrastructure (like grid power). 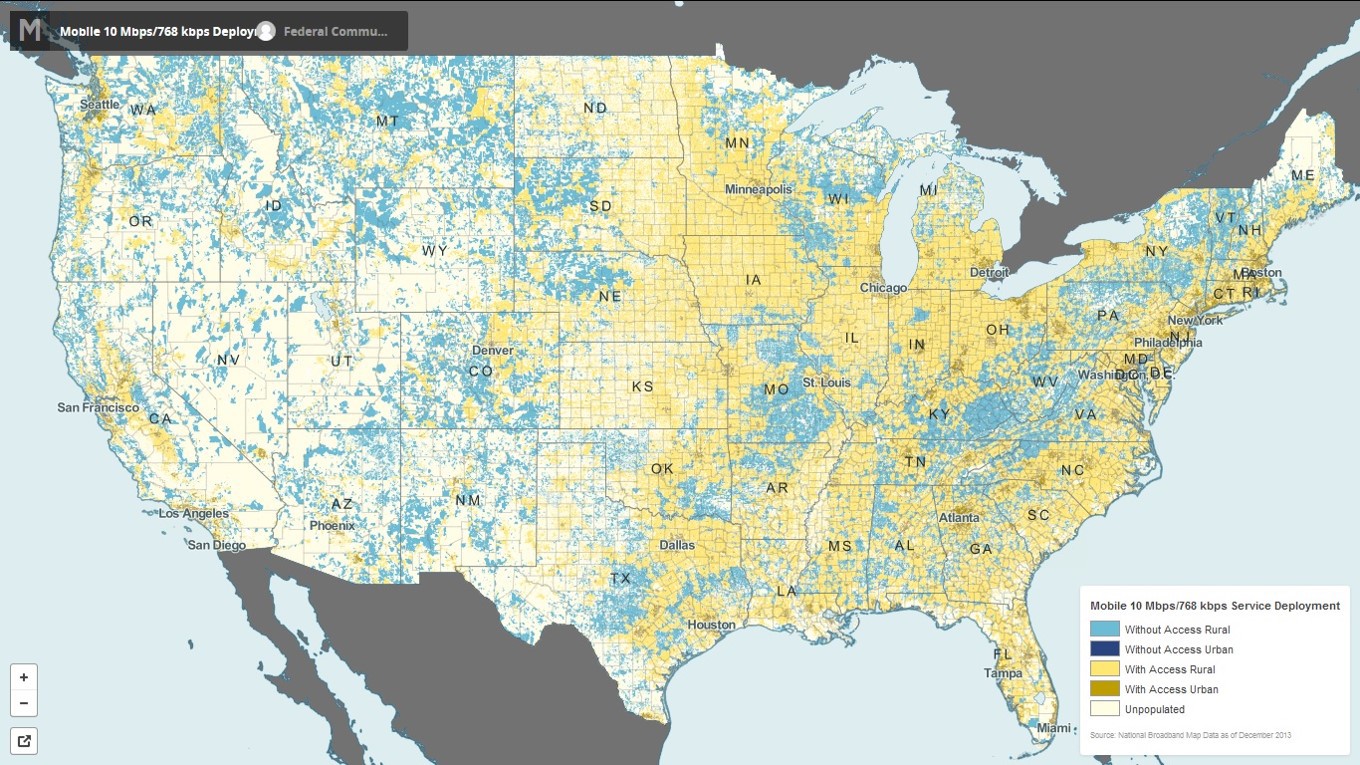 To solve the last mile connectivity problem, we must design a network with the end user in mind. Smartphones today provide the lowest point of entry ($30–35 Android) to the Internet and over a billion of them are being produced annually. To bring the next four billion people on to the Internet in the next few years, wireless (3G/LTE/WiFi) should act as the primary access network.

Governments and Internet majors have been pursuing multiple-approaches to solve this problem.

Google with its Project Loon is creating a worldwide network of high-altitude balloons which would connect directly to a user’s smartphone through 3G and LTE. These balloons have an advantage of height, meaning each balloon can cover an area of 5000 sqkm unlike a cell tower which covers around 5-10 sqkm. These balloons can now communicate among themselves for as long as 80 km and in chains of 10, meaning not a lot of investment in telecom backhaul and ground stations are needed. Although these balloons are difficult to navigate since they rely only on stratospheric winds, it is a fun problem to solve. As Google is perfecting WiFi to cellular handoffs with Project Fi, its new role as an MVNO (virtual network), balloons and drones (Titan) may play a crucial role in its roaming success.

Facebook through their Connectivity lab is developing stratospheric drones which would use a mix of laser and radio links to connect to ground receivers and also create an aerial drone-based backhaul network. Drones of Facebook are still in prototyping stage and details of their delivery model is not yet available in public domain.

Another method is to use White Space to provide broadband services espl. in rural areas. White Space is the free and unused spectrum that’s increasing as TV broadcasting moves from analog to digital transmission. Transmission happens over UHF spectrum, meaning towers can be spaced at longer distances (10km). But phone/tablet users cannot connect directly (yet) and have to rely on WiFi hubs which can receive these signals. Google and Microsoft (4Afrika Initiative) are two of the major companies who are testing this technology with a focus on Africa.

A promising new approach to connectivity is by the proposed small satellite constellations of SpaceX, OneWeb, LeoSat and Yaliny. These satellites would be in low earth orbit altitudes (around 1000–1200 km) meaning the latency of their connection would be similar to fiber (< 30ms). Current satellite Internet services have high latencies (>300ms) due to the distant location of their satellites (Geostationary — 35786km).

Although not all Internet applications need low latencies, it is crucial for communication services like VoIP, messaging and transactional services like banking. Also, satellites would need far fewer hops to connect to international CDNs compared to fiber-based networks, meaning countries in Africa where most fiber connections still have very high latency can now be serviced with faster connections.

At the receiver end, OneWeb and SpaceX are developing low-cost (USD 100–300), solar-powered transceivers which would provide 3G, LTE and WiFi connectivity to local communities. 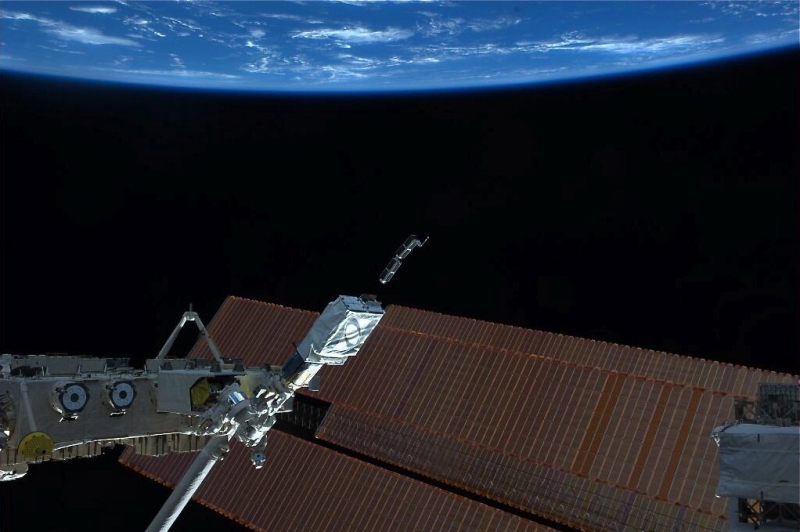 OneWeb has a constellation size of 648 satellite with a combined throughput of 10Tbps. Each OneWeb satellite can cover an area of approx. 800,000 sq.km. and each transceiver can provide services at up to 50Mbps. SpaceX has a more ambitious plan of launching around 4000 satellites starting 2019 till 2030, predominantly to serve the International backhaul market which today operates on a network of undersea cables carrying over 95% of the international traffic. Yaliny is developing a handheld satellite transceiver which would connect to the user and provide unlimited data at $10 per month. LeoSat is primarily targeting enterprise customers such as Telecom backhaul, Defence, Oil&Gas and would deliver bandwidth as high as 1.2 Gbps.

Many Satellite-based Internet ventures were proposed in the 90's which eventually failed due to limitations of technology and fast proliferation of terrestrial networks. Key innovations in satellite miniaturization, phased array antenna (electronically-steered) and solid state amplifiers (GaN) are making these constellations technologically and economically feasible now. Also, the increase in availability and reduction in costs of launch services for small satellites provided by private space companies is accelerating these ventures. Developing rapidly reusable rockets, like SpaceX Falcon 9R, would improve availability and cut costs further by orders of magnitude (10 to 100 times). These ventures have also attracted significant investor interest with SpaceX raising $1 billion from Google and Fidelity and OneWeb raising $500 million from a consortium of investors.

Two important issues that crop up on the regulatory front are spectrum allocation and landing rights. OneWeb has been granted the global license to operate in the non-Geo Ku-band by the ITU if they become operational by 2019. But it isn’t clear how new satellite constellations would be allotted such spectrum while operating relatively free of interference. SpaceX’s application for permission from the US FCC to test two of its satellites has already drawn objections from Intelsat. On the issue of landing rights, OneWeb would be partnering with domestic telecom operators using their ground stations and gateways to beam Internet, therefore they may not confront many domestic regulatory road blocks. It is not clear at this point how SpaceX would be delivering their services to the end user. Yaliny is perhaps most prone to governmental scrutiny since they would be operating based on a network of international ground stations.

In India, the second largest telecom market, Internet penetration is estimated to be still around 20% although rural and urban teledensity stand at 45% and 148% respectively. Over 90% of Indian Internet users connect to and 65% of the traffic flows through wireless networks. These numbers are no different compared to sub-Saharan Africa because telecom networks in developing nations today are predominantly built for voice (2G) and not data communications. Although average revenue per user (ARPU) in rural ($1.5) and urban ($2–2. 5) areas do vary, lack of connectivity can be attributed majorly to high CapEx (costly backhaul) and OpEx (off-grid diesel power) of existing technologies.

The Govt of India is developing BharatNet as part of the Digitial India program, a revamped and larger version of the National Optical Fiber Network (NOFN) which plans on providing fiber optic connectivity to most of the 2.5 lac Gram Panchayats (moderate size villages). The projected cost of the project stands at $ 12 Billion with around 75% cost going into laying the optical fiber to connect 2.26 lac GPs. Of the rest, 20 thousand GPs would be connected wirelessly and 3000 through satellite Internet. At the village level, community WiFi would be provided to local institutions such as schools, post offices, health centers along with cable Internet to households.

The Government can take proactive steps to augment the capacity and reach of BharatNet by following open standards in integrating them with private Internet ventures to ensure interoperability. ISRO, India’s national space agency, can launch more Geostationary satellites (like the INSAT) to increase the throughput over its territory. This would allow traffic to be diverted from low altitude systems for applications such as video, news and less interactive content which wouldn’t need low latency connections. These Geostationary satellites can also be used to empower community defined broadcasting services like Outernet. Other models such as building small satellite platforms in highly elliptical orbits (like Molniya) can be explored to improve performance over specific regions.

Internet is the most important invention of the 20th Century. It has changed the way people communicate, cooperate, learn and trade globally. The possibilities with a ubiquitous Internet coverage are endless. Let’s discuss four key areas which would have direct and positive effect: healthcare, education, agriculture and Internet governance.

Innovations in sensors and computing are rapidly miniaturizing and reducing costs of diagnostic devices and new drone-based delivery networks (Matternet) are making medicines more accessible, meaning early detection and fast remedial actions can now be made universal. As Chris Anderson would argue, this is the peace dividend of the smartphone wars.

Education will face a similar disruption when the best educators in the world can reach a virtual classroom of hundreds of thousands of students while also personalizing their learning experience. Although some may oppose the notion of machines teaching humans, it is inevitable. 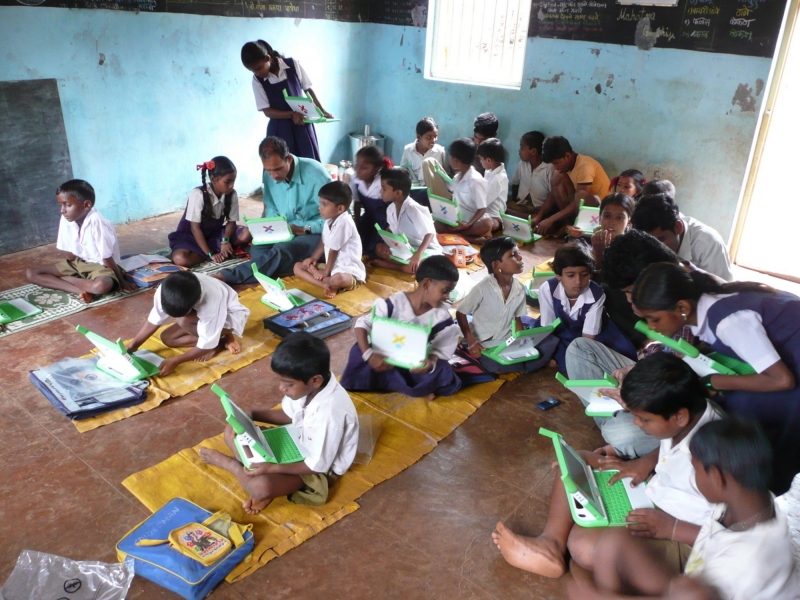 Source: One Laptop Per Child/Flickr

Small satellites (like those of Planet Labs, Skybox) are democratizing satellite imagery, meaning agriculture produce, environment, disasters among others can now be monitored in near real time. Smart tools can be built for farmers across the world to provide accurate weather and price forecasts so as to improve their productivity and income. 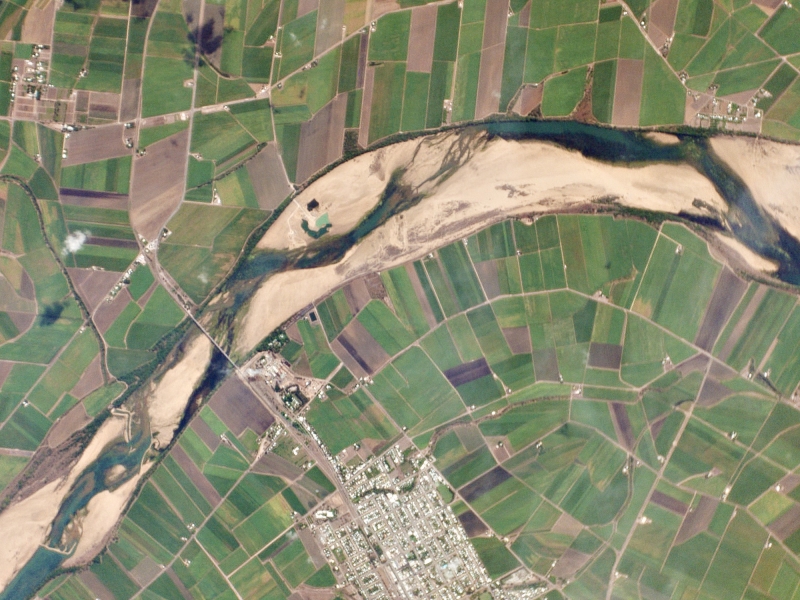 Peter Diamandis opens his book Abundance with a story on aluminum. When the King of Siam visited Napoleon III’s court, Napoleon was himself served in gold utensils while the honored guest was served in aluminum utensils. Although the third most abundant element on earth’s crust, aluminum was the costliest metal till 19th century. With the invention of electrolysis, we could make aluminum one of the cheapest and most accessible metal today. The conflict over net neutrality arose primarily because bandwidth has been perceived as a scarce resource. Exponential innovation can create abundance through a combination of cheap smartphones and global connectivity allowing us to avert such conflict.

Never before in human history could we expand our circle of empathy and develop a collective consciousness encompassing the whole of humanity.

This could be our first chance!

PS: I have written a longer paper on Small Satellite LEO Constellations for Internet Access. Drop me a mail if you are interested. Email: my-twitter-handle@gmail.com

PPS: This article would be published in Observer Research Foundation’s Cyber Monitor for the month of August.