Before I get to the poll, a little history is in order

I got my first droid retiring my 3GS (moved to iOS from WinMO), few years ago. But I think it is the most regrettable of decisions I made. Because despite the fact that I always went for the higher end droid (at least of its time, e.g. Desire/SGS/SGSII/Sensation/SGSIII to name few) I never found a stable / solidly performing android phone. They all suffered from random crashes, reboots, sluggishness, hang ups (and I only install 4/5 apps - I need nothing more). They all have various annoying quirks as well, e.g. SGS III doesn't want to find any WiFi network at times, folders on home screen will randomly open at their own; my older Sensation's screen would stop responding "in some places" etc. IMHO almost all droids I owned had great hardware, but a crappy OS.

Few months ago, I got my hands on Lumia 800 and used it along side my Sensation/SGS III for 2+ months; and my views about WP totally changed. It easily outperforms all those multi-core droids with its dated single core SoC, being absolutely rock solid, and very easy to use UI (unlike androids copycat of iOS).

It is time again to jump ship, only thing to decide is should I get ATIV S or Lumia 920 (though I'm tilting toward the later due to better support / upgrade cycle of Nokia compared to Samsung). However, SuperAMOLED display of ATIV S will be more battery friendly, and it also have expansion slot ......... 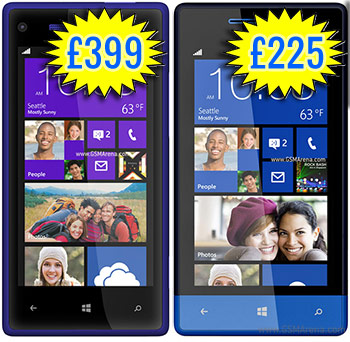 So what you guys would pick?

I'm firmly set on the Lumia 920 right now. I've always had a thing for Nokia handsets, and until Android hit the scene I only ever owned them. Plus, I don't think I'll miss the lack of storage expansion (my SGS3 has 16GB now and I'm only using 1GB of it!), and I think Nokia will be quicker and more supportive with its own apps than Samsung will be.

and I think Nokia will be quicker and more supportive with its own apps than Samsung will be.
Click to expand...

Most of the storage on any of the smartphones I owned, went to videos or reading material (to keep myself busy during my traveling time).
J

Nokia Lumia 920 is certainly neat device and so many reason to go for the Lumia 920, but lack of microSD card slot seems disappointing, if more storage needed, certainly the Ativ S is the one to choose, here is a head to head comparison on three of the new Windows Phone8

We now also have a smartphone comparison that lists the new iPhone 5 and all the rest of the flagship smartphones including the Galaxy S3, HTC One X and Lumia 920. I have to say the Lumia 920 really holds its own against the other platforms.
R

After looking this Lumia.. well, I'll vote for Lumia 920. Minimalist design, simple but elegant I think

Few interesting reads on the subject:

Display resolution and PPI
Display size and technology
Display response time
From what I've read about it so far, the latest iphone seems to barely catch the competition in some aspects, and lacks in many others, so overall, its an underwhelming upgrade at best.
You must log in or register to reply here.