Editor's take: Bethesda is celebrating the 10th anniversary of The Elder Scrolls V: Skyrim with a new anniversary edition of the game that drops later this year. In case you were needing yet another version of Skyrim to add to your collection, this is it. Skyrim launched on November 11, 2011, and has since earned a reputation as one of the top open world RPGs ever produced. The game has remained relevant over the years thanks in part to a deluge of official and fan-made mods that bring even more functionality to an already impressive offering.

The Elder Scrolls V: Skyrim Anniversary Edition is described as the most definitive version of the game to date. It’ll include the full game plus all three official expansion packs and 500 pieces of unique content from the Creation Club.

It’s scheduled for launch on November 11, 2021 – exactly 10 years to the day that the original arrived – and will be available for PlayStation 4 (with backwards compatibility on PlayStation 5), Xbox One, Xbox Series and PC.

That’s right, parent company Microsoft isn’t locking PlayStation gamers out of the fun after scooping up ZeniMax late last year for $7.5 billion. That’s probably a wise move, as more units will be sold this way and Microsoft won’t tick off a large faction of the gaming community by making the Anniversary Edition an exclusive to its platforms.

One group that has seemingly been left out is Nintendo. Microsoft made no mention of an Anniversary Edition for the Switch; gamers on that platform will have to continue to make do with the standard Skyrim release.

This is like Groundhog day. And they just keep releasing the same game, over and over again.
Reactions: NotAFanboyofAny, Tams80, Eldritch and 6 others

Reactions: Tams80, Eldritch, Reehahs and 4 others

Didn’t one of the heads at Bethesda say they will stop making it if we stop buying it? Which is a fair point! I’ve bought it three times, on the Xbox 360, the PC and the switch. I don’t mind either, it’s a fantastic game.
Reactions: mountains and ziffel66

When the launched the "Special Edition," it was free to Steam users that had the original game plus all DLC, so I didn't mind. If they repeat that, I will not mind. If they expect me to pay $60 for it, they're high; though I wouldn't mind paying between $15 and $20 for it...
Reactions: Reehahs, Mr Majestyk, passwordistaco and 1 other person

I never liked the Special Edition as much as I like the vanilla version.

Even without mods, the original game is still one of the most involving, immersive open-world RPGs that exist today. It's still immensely re-playable, even today.

At least for me.
Reactions: Avro Arrow

This is interesting, but not for the reasons that you'd think. So once we get out all of the "*another* Skyrim launch" memes out of the way I want to look at something else.

The only truly new content being offered here is actually, user created content: they're taking the curated mods from the creation club and putting them out as an edition.

Now this is a bit of a problem: modders that took Bethesda's offer thought the deal was just some additional content and they were paid a fixed amount for their work and no revenue participation AFAIK and IIRC.

However, Microsoft now saying "Take that content and use it to sell it on PS5 and Series X" well hold on a minute: we're actually talking a hell of a lot more money being made from the modding community. Even if a modder agreed to the initial deal this wasn't the scope at all. I am sure they *are* covered in their contract details to use if for whatever purpose they want but it's still basically taking advantage of the PC modding community to sell a potentially lucrative new version on the new consoles based on the strength of those mods some of which are actually rather good like Hunterborn or Campfire.

So in short: new anniversary edition is an ok idea but Microsoft: Pay the modders.
Reactions: Tams80, 0dium, Alfatawi Mendel and 2 others
E

Some RTX would be nice.
Reactions: mountains and ScottSoapbox

TechSpot Elite
The definition of insanity...

Puiu said:
The definition of insanity...
Click to expand...

Unless you're not referring to Bethesda.
P

Why wouldn't they do it???? It's free money! You milk a product for all the cash it can yield you after all the hard work you put into it. welcome to capitalism and this is a good thing.
Reactions: ScottSoapbox and JStacts
D

Does it allow me to turn-off the randomly-spawning dragons in the main quest? No?

Guess I'll have to hold-out for Skyblivion to save the mess-of-a-main-quest!

defaultluser said:
Does it allow me to turn-off the randomly-spawning dragons in the main quest? No?

Guess I'll have to hold-out for Skyblivion to save the mess-of-a-main-quest!
Click to expand...

My preferred method for disabling the spawning dragons is to ignore completely the main quest.

eforce said:
Some RTX would be nice.
Click to expand...

Hahaha. Do they even know they have become a meme?
D

JStacts said:
My preferred method for disabling the spawning dragons is to ignore completely the main quest.

And then you get no powers. cutting-off the main quest also seems to cut-off a lot of your side fun - yes, it still needs to be an option!

Remember when you used to have to walk to the dungeon where a dragon was lying-in-wait fr you? With Skyrim, after the fourth time of having your shopping interrupted in another town, it gets boring .

The fact that thy all fly around in open air also makes you incredibly dependent on a single skill: projectiles. Since when did The Elder Scrolls just become a game of "I cast Fireball straight up at the moon for the fifty-billionth time"
Last edited: Aug 20, 2021
Reactions: Tams80, passwordistaco and psycros

TechSpot Elite
I'm pretty sure that I finished all of the DLCs so long ago that I was still using my Phenom II X4 965 and twin HD 4870s. To their credit, the game ran great at 1080p with no hiccups. I wonder what the frame rates would be with an R5-3600X and an RX 5700XT. I think that I'm probably spoiled though because I've been playing Assassin's Creed: Odyssey at what has been essentially 2160p with max settings. Gaming on a 55" 4K TV has turned out to be a real boon because the TV upscales the image so that 720p is indistinguishable from 2160p. It's only 60Hz but I don't care. It looks amazing!
Reactions: Reehahs

winjer said:
This is like Groundhog day. And they just keep releasing the same game, over and over again.
Click to expand... 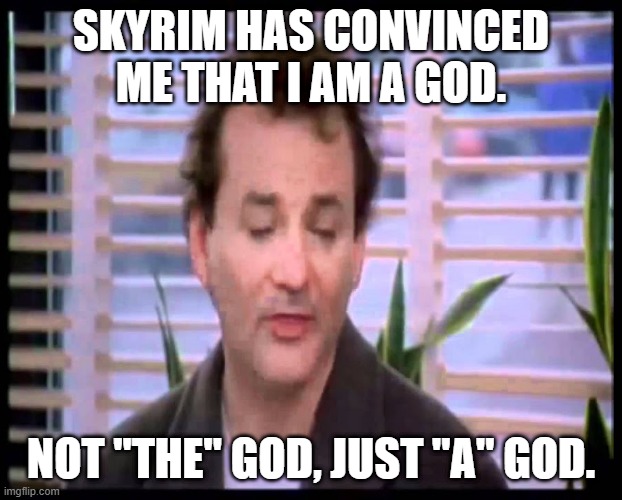 defaultluser said:
Does it allow me to turn-off the randomly-spawning dragons in the main quest? No?

Guess I'll have to hold-out for Skyblivion to save the mess-of-a-main-quest!
Click to expand...

I believe a mod called "Alternate start: live another life" is available on the creator's club.

If this is made available on this version then you can start somewhere else that's not the main quest, in fact the main quest will never start as long as you don't go near Helgen and even if you do so without the main quest there is no dragons.
T

"The game has remained relevant over the years thanks in part to a deluge of official and fan-made mods."

There is no deluge of official mods. The last DLC was around June 2013. That's 8 years without any content. Bethesda basically deserted Skyrim.

User mods are the only reason that Skyrim is relevant.

People have been waiting 10 years for Elder Scrolls 6. Still no confirmation that anything is in the works.

Skyrim is similar to Minecraft. Despite a trickle of technical updates, there is no real improvement to the game itself. Both games survive because of user mods, not because the game corporations are improving the games. They milk the talents of the mod designers.

I had hopes when Microsoft bought Mojang, but that went nowhere very rapidly. I wouldn't be surprised if Microsoft sits on Skyrim for another ten years.
Reactions: Alfatawi Mendel
M

I still haven't finished the game. I got a long way through the original, but many years later when the SE version dropped and with not having played for more than a year I decided to start from scratch with a fully modded game that looks sensational. I will not be starting again. If they said the definitive edition was using Unreal 5 engine then I would be interested.

My Prince, that's awfully harsh. Why songs have even been written about, "Skyrim".


Listen for the key change from Dm to Em in the last verse, and the way the singer pulverizes the last note, an E5.
Reactions: Avro Arrow

captaincranky said:
My Prince, that's awfully harsh. Why songs have even been written about, "Skyrim".


Listen for the key change from Dm to Em in the last verse, and the way the singer pulverizes the last note, an E5.
Click to expand...

Oh, I suppose the horse isn't that dead. Rigor mortis is still, uh, influencing some of the horses more interesting features...
Reactions: Tams80

Unless you're not referring to Bethesda.
Click to expand...

I was just talking in general, both the devs and the players
You must log in or register to reply here.

The Elder Scrolls V: Skyrim Anniversary Edition is out today