It appears Chinese toy maker, In Icons, did manage to invoke the wrath of Apple. Earlier this month, the litigious company threatened to sue In Icons for creating a creepy, unlicensed action figure which sported an eerie semblance to Steve Jobs -- a likeness carved into plastic that we'll probably never see again.

On Sunday, In Icons posted an announcement on their website regarding their latest decision to prevent the action figure from seeing the light of day.

"On 5th October 2011 Steve Jobs, the genius, great inventor and visionary, passed away. For the past 25 years I have been a big fan of Steve Jobs following his achievements religiously and using Apple products. His passing left me with emptiness, sadness and a feeling of great personal loss. (I am sure that these sentiments are felt by all of his fans) Four years ago I created a single figurine of Steve which I placed on my desk next to my Mac. I decided to share this memento with the rest of his fans as a commemoration to Steve. The figurine, especially his facial features, was adjusted countless times to achieve his likeness in my memory. I strove to perfect the figurine with the spirit of Steve Jobs because only this will properly reflect my respect and admiration of him."

The posable action figure was destined to be a strikingly detailed, 1:6 replica of the late Steve Jobs. The toy came complete with such endearing clichés as miniature New Balance shoes, blue jeans, black turtle neck sweater and a backdrop with the iconic phrase, "One more thing...". 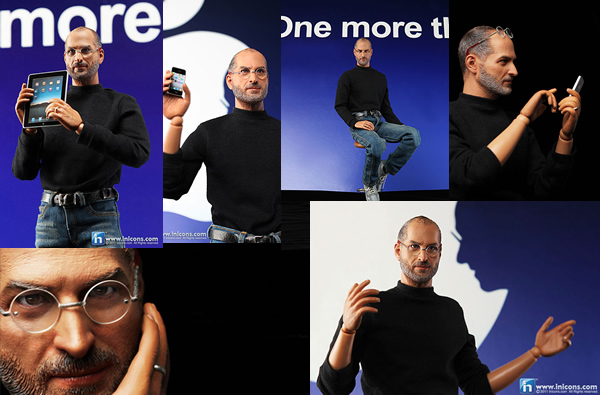 This is not the first time a Steve Jobs toy has been attempted, but kudos to In Icons for making the most realistic one to date. Unfortunately, or perhaps fortunately, it was doomed to failure without the prior blessing of Apple or the Jobs Estate though.

Earlier this month, the world also saw a Steve Jobs statue erected in Budapest, Hungary. The 6' 6" bronze statue stands on display at Graphisoft Park, a company that claims to owe its existence to Apple. Graphisoft, the maker of ArchiCAD, received monetary and equipment donations from Apple at a time when they were a young company with limited resources. Additionally, the Mac platform had been instrumental to Graphisoft's success as the bulk of their users have been and continue to be Mac users. A bronze statue of the tech luminary, the company claims, was a great way to express their appreciation. 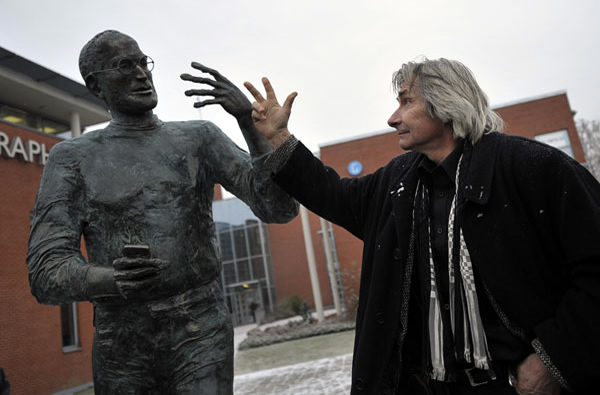