Microsoft is planning the next major version of Windows for 2024

In context: Considering the fact that Windows 11 and Windows 10 reached a combined total of 1.4 billion monthly active PCs earlier this year, it seemed like the right decision for Microsoft to slow down the pace of Windows feature updates in order to focus on system stability with monthly security patches and bug fixes. However, the company is now reportedly moving to a new Windows development cycle that comprises pushing out feature updates up to four times a year, with a new major version of the Windows client coming out every three years. With Windows 11, Microsoft said it would be releasing feature updates on an annual basis, which will arrive in the second half of each calendar year. Soon after the announcement, the company also shifted Windows 10's feature update schedule from its twice-a-year cycle to the same single update cadence.

It's why we didn't get an official 22H1 version of either operating system, though Microsoft did release a Windows 11 feature update earlier this year that arrived outside of the company's established roadmap. Now, with the upcoming 22H2 release for Windows 11 (code-named Sun Valley 2), Microsoft is tweaking the Windows development cycle further by ramping up the frequency of future feature updates and is shifting to a three-year release cycle for 'major' Windows versions.

This new roadmap, reports Windows Central, will have Microsoft rolling out new features and experiences for its current OS up to four times a year. The planned feature drops will arrive as part of Microsoft's new engineering effort internally called 'Moments,' which means IT admins might soon be having more of their own as well. And since Microsoft is back to numbering its major OS releases, the company could potentially end up announcing Windows 12 by 2024.

As of now, details around Microsoft's next major OS version are expectedly scarce. It's apparently called 'Next Valley' inside the company and is currently in the early planning and engineering phase.

For anyone that cares, W11 dev channel has 22H2 already.
L

So the good-bad-good pattern is true then? The 11 is like another Vista or 8, and we'll get the good one next, W12?
Reactions: BobHome, Underdog, Mr Majestyk and 5 others

So is Windows 11 officially a bust now or is this a major upgrade to it? MS makes it as clear as mud.
D

TechSpot Elite
Sweet. I can't wait to see the "security protocols" necessary to run this one.
Reactions: 0dium, fb020997, MaitieS and 4 others
K

I have always state I think at some point MS will force Windows to a subscription model only and we pay a monthly or yearly rate like they do now with Office 365 but of coarse for right now also still sell the stand alone version of Office but I am sure MS would like to stop doing that at some point in favor of the sub only option.

I feel MS will start a sub version of Windows as well and maybe Windows 12 will be the start of this and they will also for a couple years also sell you the stand alone version of Windows 12. Even though at least for Win 10 not sure about 11 all you need to do is have a Windows 7 or 8.1 product key and it will activate fine even though MS had stated a few years ago this was not going to be an option but to this day it still works fine on 10 at least.

I figure by the time Windows 13 (they probably will skip 13 though) so Windows 14 it will be a full subscription model only and most likely the buy stand alone version will either be very costly or completely gone same with Office. Heck if BMW can charge a monthly subscription to activate the heated seat option their cars and many other feature that are also sub monthly then I am sure MS wants the sub only model as well.
Reactions: lazer

I suspect they are working on a subscription model for Windows - you know they're clamoring for it. It could be another money making scam by giving Windows away for free but you have to pay for updates.

Personally, I don't want or need any "feature updates". I want a bare-bones OS without the fluff. When I need/want something, I'll get it on my own. I don't need MS to integrate anymore bloatware that I'll never use.
Reactions: barca1au, lazer, Underdog and 1 other person
J

BadThad said:
I suspect they are working on a subscription model for Windows - you know they're clamoring for it. It could be another money making scam by giving Windows away for free but you have to pay for updates.

Personally, I don't want or need any "feature updates". I want a bare-bones OS without the fluff. When I need/want something, I'll get it on my own. I don't need MS to integrate anymore bloatware that I'll never use.
Click to expand...

Yep exactly why I use Linux on my personal machines.
Reactions: RockyRoad22, Sherwoodnt and MarkHughes
O

I'm almost at the tipping point with Linux in my business. Not all, but many Steam games now will install under Linux, which is really one of the larger hang-ups for Windows desktop users.
Reactions: RockyRoad22, Sherwoodnt and MarkHughes

Who's excited for this!? I know I am!
Reactions: sdms96825 and MaitieS

It's not just semantics. To date Microsoft has never (intentionally) changed the hardware minimum requirements spec during a service patch or other incremental version update. They have made it clear with Windows 11 that major number releases is where they are willing to obsolete hardware.

So a new major version 12 coming in 2024, triggering a Win 11 end of life (security patch support) say 3 years later, could cause yet another round of hundreds of millions of devices being turned into e-waste (the first round being the Win 10 end of life scheduled for 2025.)

Microsoft's likely reason for doing this is pressure from hardware vendors who want to sell more stuff. I hope it has the opposite effect of pushing organizations to consider Linux instead of yet more needless purchases.

So, ill keep my iso with w7, (someday it would be) priceless
for everything else - w update

Time of home user-WaaS is upon us. It has been 5 years (+/-) since M$ first floated the idea of subscription based OS. Then it started perfidy slowly and very carefully creeping in with this crap across every segment except home-desktop...

Writing is on the wall for Winblow$ 12.

I would be amazed if MS actually tried to make Windows anew and better. Ditch all of the archaic code and modules nobody uses (but retain the option as an add-on for 10 folks in the World still in need of them). Redesign UI to something more manageable. Remove ads and malware. Give users the control to move \Users\ directory at the install level without black magic sideloading. Implement new file system because NTFS in day of ever faster NVMe is hopelessly inadequate for the job.

To borrow from Martin Luther King: I have a dream..., but in reality we'll get PutinOS vel W12.
Reactions: barca1au 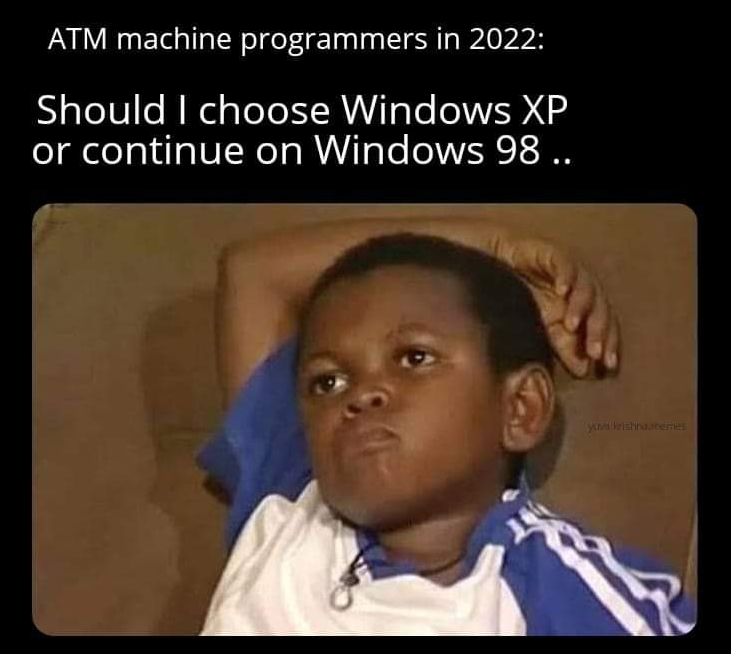 Cycloid Torus said:
What are the realistic alternatives to W10/11/12? Linux?
Click to expand...

Just purchased a new laptop for the wife because her old one would not run Windows 11, now the way I see it Microsoft is going to come out with a new version of windows that will require users to have more security and better processors to run, then there goes your new laptop or desktop it won't be worth nothing because again there will be no updates for machines that will not support the new operating system, these jokers are full of CRAP!, I think they must be working for Putin or that Chinese crackhead

Hopefully they have realized the error of their ways and quit the restrictions on older machines. They could easily make it configure itself for each particular machine and give the user the option of what features might work vs. turning off everything. After all these years they still haven't learned the value of catering to the marketplace rather than the other way around.
Reactions: Underdog

Hopefully, it's not another skin on top of 10 million existing skins from previous versions of Windows.
T

If Microsoft doesn't get their act together and come up with some consistency in how they maintain Windows it will drive a lot of people over to Apple and Linux. What is their problem anyway? What is driving all this indecisiveness? There's a different model almost weekly it seems.
You must log in or register to reply here.