Someone put Apple's M1 chip inside of an iMac

Bottom line: Apple's new M1-powered MacBooks and Mac Mini have received glowing reviews. Many outlets have praised the surprising performance that gives x86 powered computers a run for their money. However, Apple has yet to upgrade its iMac and Mac Pro lineups to the new silicon, so an enterprising YouTuber decided to take matters into his own hands. Luke Miani initially took apart his Intel-powered iMac to upgrade it to more modern parts, but he ended up bricking it instead. After lamenting about the lack of an M1-powered iMac, he decided to try to build it himself. The project itself is impressive and is relatively simple, all things considered. He basically just puts the logic board of an M1 Mac Mini into an iMac shell (sans all the original parts).

To start, Miani first removed all of the internals of his 2011 iMac, reducing it into a mostly empty shell. He then installed a converter board that essentially turns the iMac into a faux-Cinema Display. He connected the M1 Mac Mini to it to show that it could be used as a monitor. But of course, that wasn't enough. He took the logic board out of that Mac Mini and screwed it into the iMac case using existing standoffs. Once that was completed, he had successfully MacGuyvered a homemade M1-powered iMac.

Miani did note that there were a few "wrinkles" after the build. Initially, the Wi-Fi and Bluetooth signals were feeble because only two of the three antennas were connected. He mitigated that by repurposing the original iMac antenna bands and hooking them onto the motherboard since it used the same connectors.

Additionally, since all he did was put the Mac Mini logic board into an iMac husk, it left him with no ports. Turning on the computer also required him to remove the screen entirely, which obviously isn't ideal.

It's an interesting video to watch and only fuels speculation about how Apple will engineer its chips to work in a much larger chassis like the iMac or Mac Pro. The extra thermal headroom will allow Apple to cram bigger and more powerful silicon and seriously compete against Intel's and AMD's best chips while being considerably less power-hungry.

I feel like getting the ports to work would be relatively simply part of the build. Just run a USB-c splitter to connect to the ports and run extension cables. I don't know if the mac mini he used has an Ethernet port, but it wouldn't be hard to wire up an Ethernet extension cable with a male on one end and female on the other.

Doesn't seem like a particularly hard project but certainly an interesting one. Kudos to him.
Reactions: Reehahs, Reinette Tineker and Grimmyn

Couldn't we have accomplished the same thing by putting some velcro on a mac mini and sticking it to the back of any monitor?
Reactions: 0dium, Reehahs, MWR01 and 10 others
G

Dimitriid said:
Couldn't we have accomplished the same thing by putting some velcro on a mac mini and sticking it to the back of any monitor?
Click to expand...

Where's the fun in that?
Reactions: Grimmyn

Nice, but would be nicer to also get the camera, microphone and speakers working ;-)
H

There is not single proof M1 chips can match AMD's laptop chips on performance and even less proof that larger M1 chip could challenge Intel's and AMD's bigger chips. Not to mention M1 does not really even impress on battery life. 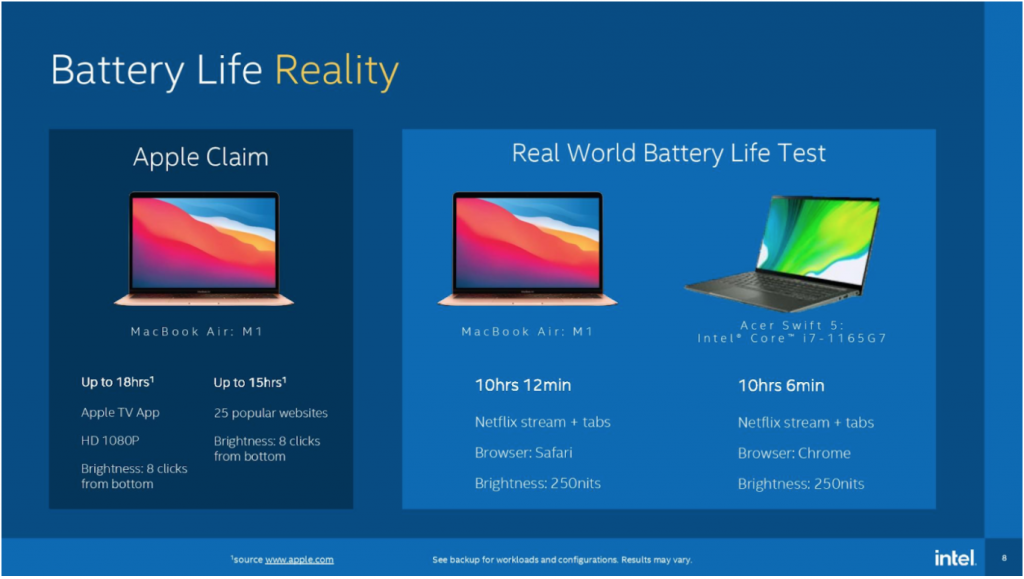 While some might say that's Intel's own test, it's pretty well on line with another site: https://www.laptopmag.com/reviews/acer-swift-5-intel-11th-gen-2020-review

So much about "considerably less power-hungry". M1 might have good battery life when compared against older Mac products but so have newer laptops vs older laptops on PC too.

Whelp, Intel have apparently cut Apple from x86, so, this is unfortunately something all Mac buyers will look forward to. Phone performance in their 3,000 buck computers.
Reactions: 0dium, MWR01, Nobina and 1 other person

gigantor21 said:
Where's the fun in that?
Click to expand...

I give you that: experimenting with computers is fun. But don't write off using velcro for random things either: it can be entertaining as well.
Reactions: fb020997

I have a better idea: put a Ryzen instead...into a Windows machine too.
Reactions: MWR01
C

For what they could do, they didn’t. Still an underpowered GPU, and now without eGPU support.
You must log in or register to reply here.