Total War: Rome is getting a full 4K remaster on April 29

Something to look forward to: Total War is often hailed as one of the best strategy franchises in the world, and for good reason: it combines empire building and diplomacy with intense, real-time tactical battles. Sadly, some of the older Total War games are starting to get a little long in the tooth, making them inaccessible to newer players -- but that'll change come April 29, with the release of Total War: Rome Remastered. Total War: Rome (technically called Rome: Total War) was first released in 2004, and it's extremely outdated by today's standards. The animations are janky, and you can probably count the number of polygons in an individual soldier's mesh on both hands. However, if you can look past its chipped coat of paint, you'll still find an entertaining strategy game at the core of Total War: Rome.

The Remaster seeks to preserve all of the things that made the game great (including its setting, units, and UI style) while bringing everything else up to par with the standards established by newer Total War games.

So, what's getting changed, exactly? The graphics, obviously -- the models, animations, and textures are all getting overhauled, and support will be added for 4K displays. "Environment effects" like dust clouds and heat haze will be added in, too.

The controls are getting enhanced, with improved camera control, map rotation, "wider zoom" on the Campaign map, and quality-of-life additions such as archer unit range markers and a new tactical map on the battlefield.

If all of that wasn't enough, the Remaster is getting 16 new playable factions (for a total of 38), all of which can be taken into PvP battles through new, cross-platform multiplayer modes (available across Windows, macOS, and Linux).

There are a few other additions, too, but we'll let you discover those for yourself. Total War: Rome Remastered costs $30, and it's available for pre-order now. If you already own the original game on Steam (it's no longer purchasable), you'll only have to pay half-price, which brings your total down to just $15.

It's so dumb to call anything on PC a "4k" remaster. Pretty much any pc game can run at 4k.
Reactions: dangh and RedBlu
S

Kirby1 said:
It's so dumb to call anything on PC a "4k" remaster. Pretty much any pc game can run at 4k.
Click to expand...

Many *Many* older games don't have the option to go to resolutions beyond what existed when the game launched.

Many *Many* older games don't have the option to go to resolutions beyond what existed when the game launched.

Things actually happened before your time young one.
Click to expand...

We're talking Rome here, not something like UFO defense (which nevermind, has an open game engine that does 4k) or the original X wing.

Hell the games I play from my childhood in 2004ish have the ability to run at 4k.
U

Theinsanegamer said:
We're talking Rome here, not something like UFO defense (which nevermind, has an open game engine that does 4k) or the original X wing.

Hell the games I play from my childhood in 2004ish have the ability to run at 4k.
Click to expand...

Yeah but if the devs haven't optimised it run properly then you end with a HUD which is impossible to read or other strange quirks...
S

Theinsanegamer said:
We're talking Rome here, not something like UFO defense (which nevermind, has an open game engine that does 4k) or the original X wing.

Hell the games I play from my childhood in 2004ish have the ability to run at 4k.
Click to expand...

No he said "ANYTHING on a PC" not Rome.

And some of us had advanced degrees in 2004. Your experience isn't everyone's.
Reactions: dangh and Aus spot
A

The state of Rome 2s release set a new bar for buggy, hardly unplayable releases. I have not pre-ordered a game since.

Rome is a classic.

More than anything else, I hope they don't break the way this version actually held battle lines. Senate/family tree was great but could stand some expansion.
Reactions: tskacoustic

TechSpot Elite
Oooo, a game announcement that I'm actually excited about that isn't a Far Cry game! I think that I do have it on Steam and so I'll be perfectly happy to shell out the $15!

I absolutely LOVED the original game. As fun as it was to use the Roman legions, I found it a lot more interesting to use the Greek Cities because, unlike some of the other factions (like the Parthians for example), the Greek Cities were every bit as developed as a faction as Rome was. There was something really satisfying about wiping out a Roman legion with a Spartan Phalanx. At least, there was AFTER I grabbed a new skin for the Spartans because... well... I don't know who the hell these guys are supposed to be but they sure as hell aren't Spartan Hoplites. They're more like the Pikemen in the Macedonian Phalanx used by Alexander much later but still armed armed with a Dory and an Aspis:
They look absolutely ridiculous. I remember my reaction to them when I saw them: 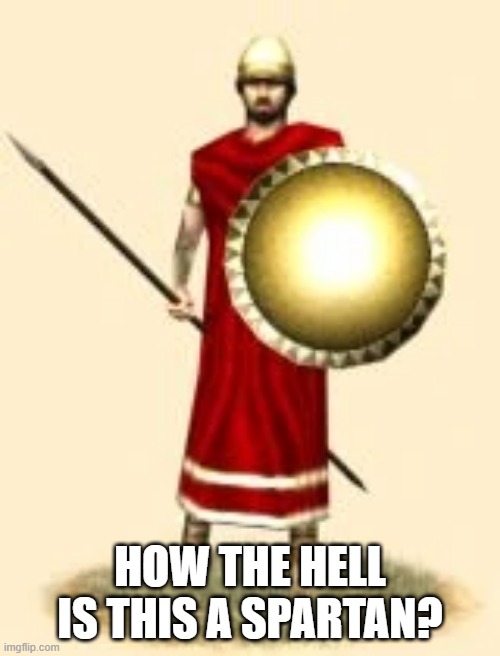 Absolute garbage. It actually made me not want to use them. I have a full set of Hoplite armour IRL and it sure as hell doesn't look like that. The new skin that I grabbed was much better and made the game far more enjoyable because it's hard to immerse yourself in a game when you're looking at something that is just stupid: 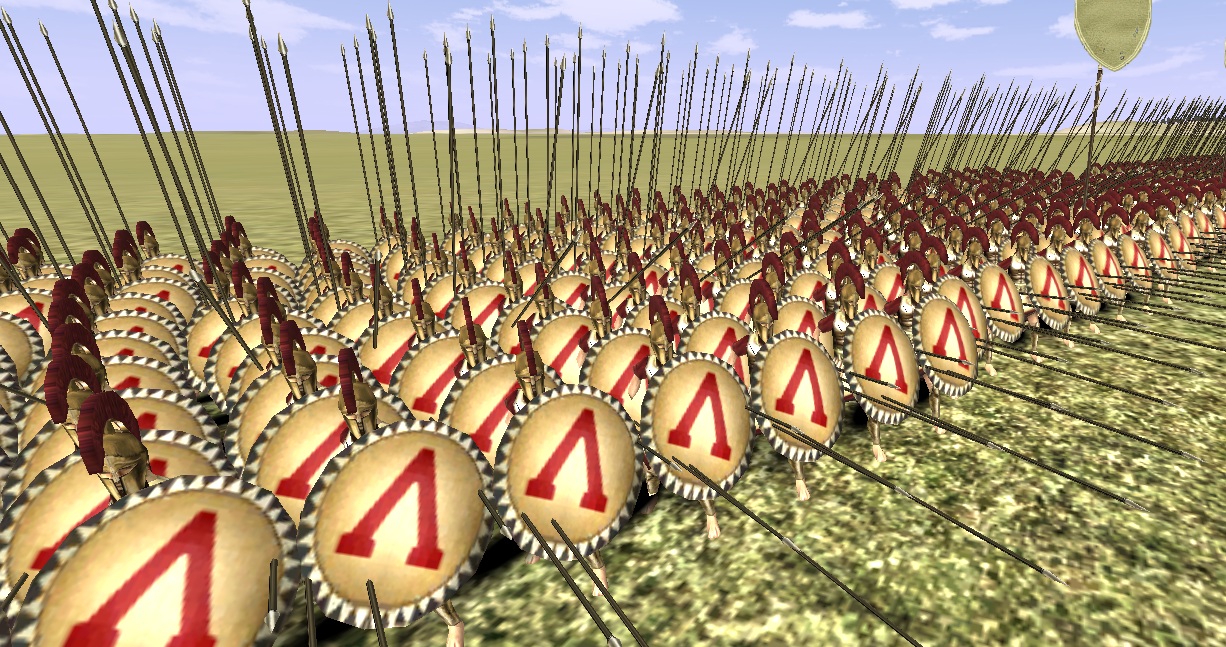 I'm really excited to see what the new game looks like.

As an aside, they should have had Metatron do the trailer.
He's awesome!
Last edited: Mar 29, 2021
Reactions: Polycount
You must log in or register to reply here.