A bizarre rash of clay iPads are being discovered at Canadian retail stores, CTV News reports. Roughly two dozen fakes have been unwittingly sold to customers by major retailers in metropolitan areas of Vancouver by the likes of Best Buy, Wal-Mart, London Drugs and Future Shop.

According to the Canadian-based news outlet, an unscrupulous individual is thought to be purchasing iPad 2 tablets with cash, replacing the devices with bags of modeling clay, resealing the boxes and returning the units for a refund. Repeating this for more than two dozen iPads could have net the wrongdoer over $14,000 in cash, by the way.

The clay approximates the heft of an iPad. Since the box appears to still have its original shrink wrap and doesn't feel empty, customer service employees will typically assume it was never opened and neglect to check what's actually inside. Unsuspecting employees then put the unit back on the shelves for resale.

The resealing job apparently looks convincing and some of the returns even included hand-made clay chargers, showing the perpetrator's attention to detail. CTV News tells the story of one victim:

She recalls being shocked opening the "perfectly sealed" box with her boyfriend once they got home -- and seeing a block of clay instead.

"It was all sealed properly and everything. It was the shape of an iPad. They even had a piece of clay where the charger went and everything. Like, they knew what they were doing," she told CTV's Steele on Your Side in a telephone interview.

Chabot said she was immediately worried about how the retail chain would react when she brought back a hunk of clay that she paid $600 for.

"I understood that it could have easily been us that did it and went back. But they were really good about it at Walmart. They were all just kind of baffled," she said. 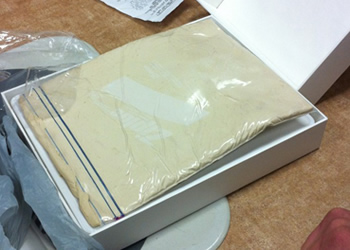 Best Buy has announced it is launching an investigation into the matter. With so many security cameras in stores these days, figuring out who bought an iPad 2 with cash and returned it shouldn't prove to be overwhelmingly difficult.

Yesterday, local authorities denied they were involved in the investigation thus far. However, Apple states it is working with Best Buy to solve the mystery.

This is merely speculation, but since Apple includes unique asset numbers on the underside of the boxes and assuming those numbers were left intact after the return, it should be just a matter of time before the company can find the missing units via GPS.